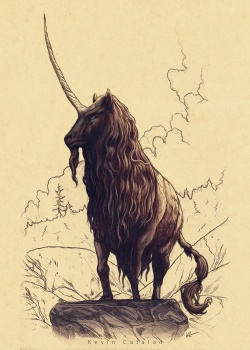 A unicorn, as envisioned by Kevin Catalan ©

A unicorn is a large goat-like animal, with a long single horn on its head. Unicorns are believed to live on Skagos,[1][2] and some claim unicorns can be found in the higher mountains of Ib.[3] Sure-footed unicorns can climb steep mountains.[4] 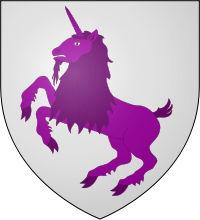 The House Brax coat of arms features a unicorn.

There are ancient tales of Hairy Men in Essos riding unicorns to battle,[5] and Skagosi lords are also said to ride unicorns.[4]

Stone sentries outside of the shop of Tobho Mott in King's Landing are decorated as griffin and unicorn knights.[6]

Dishonest traders sometimes sell "unicorn horns" which are actually the tusks of narwhals hunted by the Ibbenese.[4]

Unicorn horns are amongst plunder brought from distant lands by Euron Greyjoy.[11]

Jon Snow, in a dream as his direwolf, Ghost, sees that Shaggydog has fought and killed what may be a unicorn.[12]

In the cave of the three-eyed crow Leaf tells Bran Stark that the unicorns are all but gone.[13]

Among some of the tribute collected from the free folk passing through the Wall is a helm made with a unicorn’s head.[14] 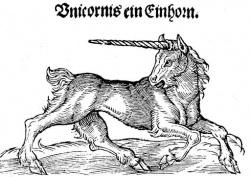 A wild rain lashed down upon his black brother as he tore at the flesh of an enormous goat, washing the blood from his side where the goat's long horn had raked him.[12]

—dreams of Jon Snow as Ghost