Vaith is the seat of House Vaith in Dorne. It lies on the river Vaith.[1] There is a town beneath its walls.[2] West of Vaith are the deep sands of Dorne.[3] 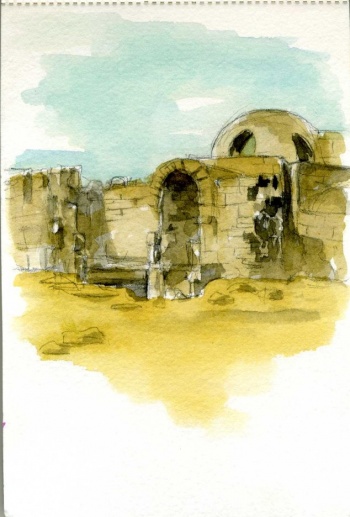 The Vaiths built a tall and pale castle in the hills east of the restless dunes of Dorne amid the coming of the Andals to the land.[4]

During Aegon's Conquest, Rhaenys Targaryen discovered that the Vaiths had abandoned the castle.[5] The Vaiths attacked the foraging parties of Lord Harlan Tyrell during the First Dornish War. After hearing of the Defenestration of Sunspear, Lord Tyrell intended to capture Vaith and continue east along the river. His army disappeared in the red sands between the Hellholt and Vaith, however. King Aegon I Targaryen and Visenya Targaryen burned Vaith in 9 AC.[6]

At some point between the ending of The Hedge Knight and the start of The Sworn Sword, Ser Duncan the Tall and Prince Aegon Targaryen reached the Prince's Pass in Dorne, probably seeking Tanselle Too-Tall as hinted by the last few words of The Hedge Knight. Dunk's horse, Chestnut, died on the crossing from the Prince's Pass to Vaith.[7] He and Egg rode double on Thunder for an unspecified period of time until one of Egg's brothers gave them Maester.[8] Once in Vaith, Dunk met the aged Lady Cassella Vaith and spoke to her with such lack of grace as to put his own life and Egg's in danger.[7] According to Egg, however, Lady Vaith was mad,[7] so it is unclear if that danger could have been avoided.

Princess Arianne Martell fled Sunspear with Tyene Sand to try to marry Willas Tyrell at Highgarden, but they were caught by Oberyn Martell at Vaith.[9]

Princess Arianne Martell plans to take Princess Myrcella Baratheon across the sands of Dorne via Vaith, the Hellholt, and Sandstone, but they are intercepted by Areo Hotah on the Greenblood.[3]