Val is a member of the free folk. She is the sister of Dalla, the wife of Mance Rayder.[3]

Val is a beautiful young woman with blonde hair[3] the color of dark honey[2] and reaching to her waist,[4] which she sometimes wears in a golden braid across one shoulder.[5] Val has high sharp cheekbones[4] and eyes which appear pale grey[4][6] or blue.[2] She is slender with a full bosom.[4]

The graceful[4] Val is resourceful, brave and capable.[7] She is fierce[6] and a capable rider.[2] 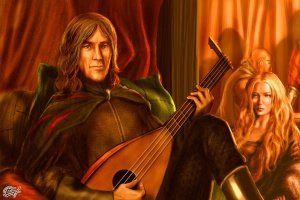 Val in the tent of Mance Rayder by Amok©

Val "stole" Jarl, a wildling raider. She is present in the tent when Jon Snow is presented to the King-beyond-the-Wall, Mance Rayder.[3] Jarl falls to his death while attempting to cross the Wall.[8]

Using a Myrish far-eye during the battle beneath the Wall, Jon spots Val milking a she-goat near Mance's tent.[9] When the wildling host is attacked by Stannis Baratheon's men, Val helps deliver Dalla's child[4] and they are protected by Jon.[1] Dalla dies in childbirth and Val is taken prisoner when the wildlings are defeated.[10]

Jon disagrees with Stannis's assertion that the steward had captured Val during the battle.[10] Hoping to gain the support of the north and the free folk, Stannis offers to legitimize Jon as Jon Stark, Lord of Winterfell, and wed him to Val.[4] Jon refuses the offer,[10] however, and is then elected Lord Commander of the Night's Watch.[11]

Val watches the black brothers of the Night's Watch from her chamber in the King's Tower. Samwell Tarly is embarrassed the few times he speaks with her.[12] 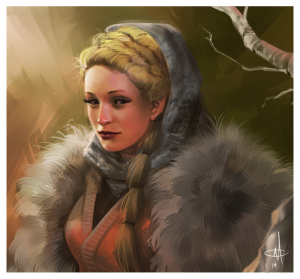 Many men from the Night's Watch and Stannis's army are smitten with Val's beauty. The men of the Seven Kingdoms consider her a princess, but to the free folk she is merely Dalla's sister.[13] Ser Justin Massey hopes to wed Val and claim Winterfell.[14] Confined to her chambers, Val nearly kills a man-at-arms with his own dagger while trying to escape.[6]

Val unsuccessfully begs Stannis to spare the captive Mance, stating she is willing to marry a kneeler.[5] During the burning of "Mance"—actually Rattleshirt[15]—a regal-looking Val wears a simple circlet of dark bronze. She does not join in the prayers to R'hllor.[6]

Jon sends Val with a half-blind garron on a mission to bring peace terms to Tormund Giantbane. Before leaving, she calls Gilly's child a little monster, and Jon verifies that the Wall was responsible for Jarl's death.[7] Some men of the Night's Watch disagree with Jon's decision to release Val, and Jon angers Ser Axell Florent by refusing his request to see the so-called princess.[16]

When Val returns with Tormund, Jon is impressed, as many seasoned rangers had failed in finding his wildlings. Jon has her relocated from the King's Tower to the top floor of Hardin's Tower, as the former has been claimed by Queen Selyse Florent and the latter is protected by the giant Wun Wun.[2]

Val kneels when she is presented to Selyse and her daughter, Princess Shireen Baratheon. Val is wary of Shireen because of her greyscale, and mentions to Jon that the child is not clean and should be killed. This horrifies Jon, who is grateful that neither Selyse nor her queen's men heard Val when she said it.[2]

The letter sent by Ramsay Bolton to Jon includes the wildling princess among those whose presence is demanded by the new Lord of Winterfell.[17] Selyse decides to have Val married to Ser Patrek of King's Mountain, but the knight is killed near Hardin's Tower by Wun Wun.[17] 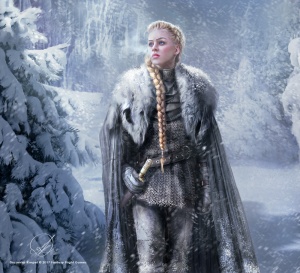 I am no southron lady but a woman of the free folk. I know the forest better than all your black-cloaked rangers. It holds no ghosts for me.[7]

You have my thanks, Lord Snow. For the half-blind horse, the salt cod, the free air. For hope.[7]

Lord Crow is welcome to steal into my bed any night he dares. Once he's been gelded, keeping those vows will come much easier for him.[2]

King Stannis had plans for Val, he knew; she was the mortar with which he meant to seal the peace between the northmen and the free folk.[12]

Val did not need to smile; she would have turned men's heads in any court in the wide world.[6]

Lonely and lovely and lethal, Jon Snow reflected, and I might have had her.[6]

A nubile girl, I hear, and not hard to look upon. Good hips, good breasts, well made for whelping children.[18]

A warrior princess, he decided, not some willowy creature who sits up in a tower, brushing her hair and waiting for some knight to rescue her.[2]

You are insolent. I suppose that is only to be expected of a wildling. We must find you a husband who can teach you courtesy.[2]