Vargo Hoat, sometimes called the Goat,[8] is a sellsword from Qohor who leads the Brave Companions mercenary company.

Vargo is a tall and gaunt man.[4] He has a two-feet-long ropey black goatee dangling from a pointed chin.[4][8] A large tongue causes Vargo to lisp and slobber when he speaks.[3]

Vargo is more cunning than he seems.[9] He is a sadist who frequently tortures his prisoners by chopping off their hands and feet, earning him an additional nickname, "the Crippler".[2]

Vargo wears a chain of linked coins from all the places where he has fought. The coins are of every shape and size, cast and hammered, bearing the likenesses of kings, wizards, gods, demons, and all manner of fanciful beasts. Vargo rides a zorse. His coat of arms feature the Black Goat of Qohor and he wears a helm shaped as a goat's head.[4]

Vargo and the Brave Companions were brought across the narrow sea by Lord Tywin Lannister.[10]

After having caught a venereal disease, Vargo began sending women to be examined by Qyburn as a precautionary measure, before raping them.[11]

As war breaks out in the Seven Kingdoms, Lord Tywin Lannister orders his brother, Ser Kevan Lannister, to have Ser Gregor Clegane, Ser Amory Lorch, and Vargo raid the riverlands with three hundred horsemen each.[12] Tywin offers to add Vale mountain clansmen to Vargo's party, but Tyrion Lannister declines so that the clansmen can accompany him to King's Landing.[12] 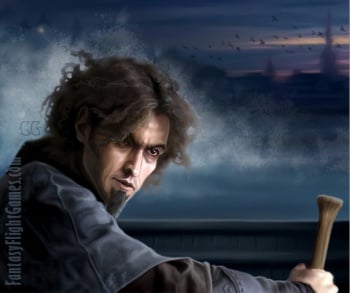 The Mountain's men and the Brave Companions forage and raid near Harrenhal and the Gods Eye. Vargo's sellswords are said to have slain Lord Beric Dondarrion, although he has since been reported as alive.[4]

There is tension between the Lannister forces and Vargo's men, leading to occasional violence. One incident starts with an archer from Lord Lewys Lydden's men taunting some Brave Companions over their failure to capture the brotherhood without banners and their leader, Beric, and leads to the death of Ser Harys Swyft's squire. After Tywin has the archer and two Brave Companions hanged, Vargo and Harys complete their reconciliation with a kiss.[4]

When Tywin marches his troops out of Harrenhal to pursue Robb Stark, who has invaded the westerlands, he leaves Ser Amory Lorch behind as castellan of the castle. However, Amory and Vargo hate each other and Vargo soon decides to turn cloak. He leads the Brave Companions to Lord Roose Bolton's camp, where Vargo and Roose reach a deal: the Brave Companions arrange for Harrenhal to fall into the hands of the northmen, in exchange for which Vargo is promised the title of Lord of Harrenhal once Roose and his men leave the castle.[3][9]

As a result of the agreement, together with some plunder that includes a huge caged bear, Vargo brings a group of northmen to Harrenhal, led by Robett Glover and Ser Aenys Frey. He claims they are captives the Brave Companions took when they repelled an attempt by Lord Bolton's forces to cross the Trident. As part of the feint, the northerners are chained, in ragged clothes and many fake injuries. Despite his displeasure with Vargo's assumed big catch, Amory falls for the trick and orders that the captives be brought to a dungeon, ignoring a protest by Robett that they had been promised honorable treatment by Vargo.[3]

Before the Brave Companions can keep their side of the bargain of releasing the prisoners so that they can overpower the small force left to defend Harrenhal, Arya Stark, not realizing what is going on, organizes a successful liberation of the captives with the assistance of Jaqen H'ghar, Biter, and Rorge. The northmen and the Brave Companions, now joined by Biter and Rorge, then bring the castle under their control and the following evening Roose arrives to take his seat at Harrenhal. Vargo and Lord Bolton watch on as the Brave Companions parade a naked Amory through the yard and throw him into the bear pit.[3]

The Brave Companions keep foraging for Lord Bolton with the additional assignment of rooting out Lannister forces they come across. Vargo splits up his group in four parties, the largest led by him, the others by his most trusted captains, so that they can visit as many villages as possible. In order to identify traitors, Vargo seizes people who had helped him while he was employed by Lord Tywin and confiscates the money they had received for their prior assistance. The Brave Companions often return to Harrenhal with bags full of silver.[13]

Arya, serving incognito as the cupbearer Nan to Roose Bolton, finds out that he is going to eventually hand Harrenhal to Vargo and that she will stay behind when Roose leaves the castle. Arya flees from Harrenhal, taking Hot Pie and Gendry along.[2][13] 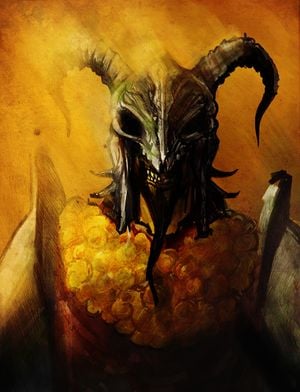 At least four Brave Companions are sent in pursuit of Arya Stark, but the sellswords are killed by a wolfpack.[14]

In the aftermath of the Battle of the Blackwater, Vargo fears the vengeance of Lord Tywin Lannister and worries that Lord Roose Bolton will switch from House Stark to House Lannister.[9] After Ser Jaime Lannister and Brienne of Tarth are captured near Maidenpool by his men, Vargo has Zollo cut off Jaime's sword hand[15] as a message to his father and to dishonor Roose in the eyes of the Lannisters.[9] Vargo also hopes to gain in marriage the hand of Alys Karstark, offered by Lord Rickard Karstark to whomever brings him the Kingslayer, which would give Vargo the chance to become Lord of Karhold.[16] A displeased Roose still intends to leave Harrenhal to Vargo, albeit knowing that Tywin is bound to retake the castle and chastise Vargo eventually.[9] Vargo refuses to accept Lord Selwyn Tarth's offer of ransom for Brienne, as he expects to be rewarded with sapphires.[11]

After sending Jaime on to King's Landing in the company of Steelshanks Walton, Roose marches north to the Twins for the wedding of Lord Edmure Tully and Roslin Frey.[17] Vargo tries to force himself on Brienne at Harrenhal, but she bites him in the left ear. Vargo throws her into the bear pit and has her fight his bear with a tourney sword and no armor. When Jaime returns to rescue Brienne from expected rape at the hands of the Brave Companions, he offers to ransom Brienne, but Vargo says that if he wants her, he should go and get her. After Jaime leaps into the bear pit to rescue Brienne, Walton's crossbowmen kill the bear to protect Jaime. Vargo reluctantly allows them to leave Harrenhal, stating he is 'merthiful'.[11]

Tywin intends to offer generous terms to rebels in the aftermath of the Red Wedding, with the exception of the Brave Companions.[18] After the effortless capture of Harrenhal by the Mountain's men, Vargo's hands and feet are cut off.[5]

At the Whispers, Timeon explains to Brienne of Tarth that Vargo's ear became infected, turning black and leaking pus. Urswyck and Rorge argued that the Brave Companions should leave Harrenhal, but Vargo, still believing he could be Lord of Harrenhal, ordered his men to defend it for him. Almost all Brave Companions abandoned their leader and dispersed, however, allowing Ser Gregor Clegane to easily capture the castle. Before leaving for King's Landing to fight at Tyrion Lannister's trial by combat for the death of King Joffrey I Baratheon, Gregor finished Vargo off.[6] Rafford took possession of Vargo's chain of linked coins.[8]

When Ser Jaime Lannister returns to Harrenhal on his way to ending the siege of Riverrun, he commands that Vargo's head be shown to him. Although most of the flesh is gone and the lips, nose and ears have been sliced off, Jaime recognizes that it is Vargo's because of the distinctive goatee.[8] Shitmouth and Raff inform Jaime that Gregor found Vargo sitting alone in the Hall of a Hundred Hearths, half mad with pain and fever from his festering wound. In a mockery of Vargo's preferred way of torturing his prisoners, Gregor cut off Vargo's limbs piece by piece over an extended period of time while he had the wounds bandaged so that Vargo stayed alive. Vargo first lost his hands and feet, then his arms and legs. The extremities as well as other parts of Vargo's body were then fed as "roast goat" to northern prisoners that Gregor brought to Harrenhal, including Ser Wylis Manderly, as well as to Vargo himself.[8] Jaime orders his squire, Josmyn Peckledon, to throw Vargo's head into the Gods Eye.[8]

Jaime: Lord Vargo, you were foolish to leave my father's service, but it is not too late to make amends. He will pay well for me, you know it.
Vargo: Oh yeth. Half the gold in Cathterly Rock, I thall have. But firth I mutht thend him a methage.[15]

—Vargo to Rorge, Shagwell, and Zollo regarding Brienne of Tarth

How many monsters does Lord Tywin have?[4]

Shagwell: If Lord Bolton's goat eats the men who fed Lord Lannister's goat, how many goats are there?
Arya: One.
Shagwell: Now there's a weasel clever as a goat![13]

I ought to write Robb Stark a stern letter. I understand his man Bolton is stabling goats in my high hall, it's really quite unconscionable.[19]

—Petyr Baelish to the small council

He will be pleased to see you, I have no doubt, but I would not call him a goat to his face. Lord Vargo grows prickly about his dignity.[15]

Roose: Do you know why Hoat cut off your hand?
Jaime: He enjoys cutting off hands. He enjoys cutting off feet as well. He doesn't seem to need a reason.
Roose: Nonetheless, he had one. Hoat is more cunning than he appears. No man commands a company such as the Brave Companions for long unless he has some wits about him.[9]

Roose: After a war there is always a peace, and with peace there are pardons ... for the Robb Starks, at least. Not for the likes of Vargo Hoat. Both sides have made use of him, but neither will shed a tear at his passing. The Brave Companions did not fight in the Battle of the Blackwater, yet they died there all the same.
Brienne: You'll forgive me if I don't mourn?
Roose: You have no pity for our wretched doomed goat?[9]

—Roose Bolton and Brienne of Tarth