From A Wiki of Ice and Fire
Jump to: navigation, search
For others with the same name, see Walder Frey (disambiguation).

Walder Frey is the Lord of the Crossing and head of House Frey. Though almost ninety years old and infirm, he still maintains an active hand in the running of his house at the Twins.[8] In the television adaptation Game of Thrones, he is played by David Bradley.[7]

Walder has become famous for siring many children and surviving many wives. He is to marry his eighth wife and has over a hundred descendants, base and trueborn. Walder has had twenty-two trueborn sons and seven trueborn daughters from his marriages, with an unknown number of bastard sons and daughters. He places a great emphasis on family loyalty, though his descendants jockey ruthlessly for his favor. Many Freys name their sons Walder and daughters Walda hoping that the lord will favor them.[4]

As a young child, Walder was chinless and snot-nosed, with a high shrill hiccup of a laugh.[9]

By the age of ninety, Walder has turned bald, and his head has spotted with age.[4][3] He looks a little like a vulture, but mostly like a weasel.[3] Many of his descendants have inherited his weasel-like look.[4][10] Walder's shoulders are scrawny and his long neck pink. He has a receding chin, under which loose skin dangles. He has runny and clouded eyes, and a toothless mouth, which constantly moves.[3] Walder is troubled with gout, and can no longer stand without assistance.[4]

Walder has always been irascible, sharp of tongue, and blunt of manner, and this has only increased with age.[4] He is a cautious man,[11] but also an ambitious one, and is known to only give aid to a winning cause.[12] He is peevish,[3][13] ill-tempered, envious, and prideful,[13] with a long memory,[14] and can brood long about every slight he has ever suffered.[15] Walder has a prickly manner, and can take insult in the smallest things.[16] He is considered untrustworthy by his liege lord, Hoster Tully.[1][4]

As a toddler Walder was present at the wedding of his elder sister to Lord Ambrose Butterwell at Whitewalls.[N 1] It is said he caused the marriage when he discovered his sister having intimate relations with a servant. Ser Duncan the Tall thought that Walder was an extremely annoying child, and was sorely tempted to throw him down a well.[9]

When Lord Tytos Lannister acquiesced to Walder's proposal to marry his second son, Emmon, to Tytos's daughter Genna, the ten-year-old Tywin Lannister spoke out against the match.[17]

During Robert's Rebellion, Walder and his levies arrived at the Battle of the Trident after the rebels had already won. Hoster Tully, the Lord Paramount of the Trident, has since called his bannerman "the Late Lord Frey",[8][13][4] a name Walder despises.[6] Lord Jon Arryn refused to foster Walder's grandsons at court in King's Landing and his own son, Robert Arryn, at the Twins.[4] Lord Hoster Tully refused a Frey bride for his son Edmure, and Hoster did not attend Walder's wedding to his seventh wife, Annara Farring.[4] 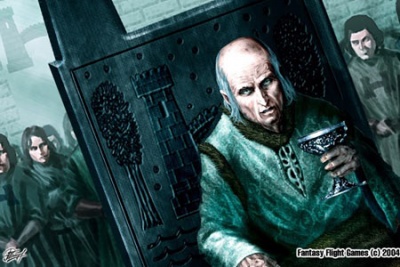 Walder Frey at the Twins - by Amok ©

At the crossroads inn, a Frey captain tells Catelyn Stark that Lord Walder is to remarry on his ninetieth name day.[8] Catelyn's father, Lord Hoster Tully, politely declines to attend Walder's wedding to Joyeuse Erenford, however.[4] After Catelyn abducts Tyrion Lannister,[8] the Frey contingent at the crossroads report back to Walder.[11]

Walder is slow in answering House Tully's summons when Ser Edmure calls the banners. Aside from skirmishing with Ser Addam Marbrand's Lannister outriders, the Freys mass their strength within the Twins.[4] Edmure is defeated by Ser Jaime Lannister at Riverrun[12] while Walder gathers his forces.[4]

Because the use of the Twins becomes a strategic necessity for the host of Catelyn's son, Robb Stark, Walder negotiates marriage contracts with Catelyn. Robb is to marry one of Walder's daughters once there is peace and his sister, Arya, is betrothed to Walder's youngest son, Elmar. In addition, two of Lord Frey's grandsons, Little Walder and Big Walder, are sent to Winterfell as wards and one of his sons, Olyvar, is made squire to Robb.[4]

During the War of the Five Kings, Walder's son and heir, Ser Stevron Frey, dies after the Battle of Oxcross, having fought bravely for Robb Stark, the new King in the North and King of the Trident. Lord Roose Bolton marries one of Walder's granddaughters, Walda Frey.[18] Walder had promised Roose to pay his daughter's weight in silver for her dowry, so Roose chose the fattest one.[19] 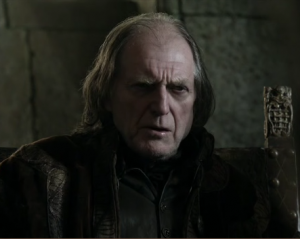 David Bradley as Lord Walder Frey in Game of Thrones

Walder sends his son Lame Lothar to Riverrun to negotiate a rapprochement. Robb and many of his key bannermen return to the Twins under guest right to make amends and marry Lord Edmure Tully to Walder's daughter, Roslin. During the wedding feast, however, Frey and Bolton men ambush Robb and his entire host, slaughtering King Robb, Catelyn Stark, many of their bannermen, and a significant portion of the northern army.[16]

Walder had secretly colluded with Lords Tywin Lannister and Roose Bolton to betray the Starks and Tullys in what becomes known as the Red Wedding.[15][21] Walder swears loyalty to King Joffrey I Baratheon, with Walder's second son Emmon receiving Riverrun and its lands as reward.[22]

According to one of his sons, Merrett, Lord Walder is not long for the world and when he dies it will be every other Frey for himself. Walder, though a tyrant, believes in taking care of his own, even the ones who disappoint him. When Stevron was heir it was different, as he was raised by Walder to believe that blood was blood, but his sons and grandsons, now the new heirs, do not feel the same way. Merrett and Petyr Frey are hanged by outlaws, the brotherhood without banners, at Oldstones.[23]

Ser Daven Lannister is promised to a Frey according to an agreement negotiated by Lord Tywin before his death.[17] Ser Lancel Lannister is betrothed to Walder's granddaughter, Amerei.[25]

Walder sends a raven to King's Landing putting forth several claims to land. Because the Red Wedding is reviled by sparrows, the small council of Queen Regent Cersei Lannister suggests that Walder's eventual successor could name the culprits and thereby rid himself of rivals.[26]

The Elder Brother at the Quiet Isle says that Lord Frey is hunting outlaws from the Twins.[27]

While returning to the Twins from the siege of Riverrun, Walder's new heir, Ryman, is hanged, presumably by the brotherhood without banners. Ser Jaime Lannister tasks Walder Rivers with informing Lord Walder that King Tommen I Baratheon requires all captives taken by the Freys during the Red Wedding.[28]

Walder sends at least 1,400 Frey soldiers under the command of two sons, Ser Aenys and Ser Hosteen, with Lord Bolton when the new Warden of the North returns to the north.[31] Rhaegar and two of Walder's sons, Jared and Symond, vanish after leaving White Harbor. Little Walder, is found slain in Winterfell.[32] 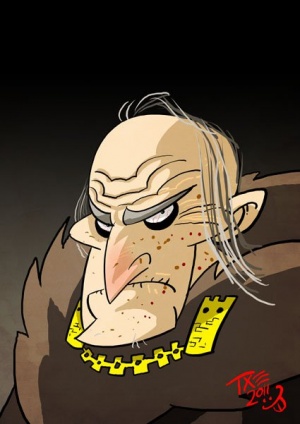 Walder Frey by The Mico ©

Now my bastards presume to teach me courtesy. I'll speak any way I like, damn you. I've had three kings to guest in my life, and queens as well, do you think I require lessons from the likes of you, Ryger? Your mother was milking goats the first time I gave her my seed.[4]

Catelyn: Where I might have expected to find you, my lord. You are still my father's bannerman, are you not?


Walder: Heh, I called my swords, yes I did, here they are, you saw them on the walls. It was my intent to march as soon as all my strength was assembled. Well, to send my sons. I am well past marching myself, Lady Catelyn. Tell her, Jared. Tell her that was my intent.
Jared: It was, my lady, on my honor.


Walder: Is it my fault that your fool brother lost his battle before we could march? I am told the Kingslayer went through him like an axe through ripe cheese. Why should my boys hurry south to die? All those who did go south are running north again.[4]
—Catelyn Stark, Walder, and Jared Frey

Catelyn: If you were strong enough to climb your own battlements, Lord Frey, you would see that my son has twenty thousand men outside your walls.
Walder: They'll be twenty thousand fresh corpses when Lord Tywin gets here, don't you try and frighten me, my lady. Your husband's in some traitor's cell under the Red Keep, your father's sick, might be dying, and Jaime Lannister's got your brother in chains. What do you have that I should fear? That son of yours? I'll match you son for son, and I'll still have eighteen when yours are all dead.[4]

Do you think I can't tell Lord Stannis from Lord Tywin? They're both bungholes who think they're too noble to shit, but never mind about that, I know the difference.[4]

Walder: You will forgive me if I do not kneel, I know. My legs no longer work as they did, though that which hangs between 'em serves well enough, heh. Some would say it's a poor king who crowns himself with bronze, Your Grace.


Robb Stark: Bronze and iron are stronger than gold and silver. The old Kings of Winter wore such a sword-crown.


Walder: Small good it did them when the dragons came. Heh.[3]
—Walder and Robb Stark

Heh, the King in the North arises. Seems we killed some of your men, Your Grace. Oh, but I'll make you an apology, that will mend them all again, heh.[16]

Lord Walder Frey might be sworn to Riverrun, but he was a cautious man who had lived a long time by making certain he was always on the winning side.[11]

That bore Walder Frey's seal beyond a doubt, Catelyn thought bitterly; hold back, wait, watch, take no risk unless forced to it.[4]

Robett: Do you think he means to betray us to the Lannisters, my lady?
Catelyn: He has an old man's caution and a young man's ambition, and has never lacked for cunning.[4]

Her father had once said of Walder Frey that he was the only lord in the Seven Kingdoms who could field an army out of his breeches.[4]

There was something of the vulture about Lord Walder, and rather more of the weasel.[3]

A few barbed words and some unseemly gloating. From him that's courtesy. I expected the old weasel to piss in our wine and make us praise the vintage.[3]

Tyrion: So much for guest right.


Tywin: The blood is on Walder Frey's hands, not mine.


Tyrion: Walder Frey is a peevish old man who lives to fondle his young wife and brood over all the slights he's suffered. I have no doubt he hatched this ugly chicken, but he would never have dared such a thing without a promise of protection.[15]
—Tyrion Lannister and Tywin Lannister

Lord Walder must soon face the Father's judgment. He is very old. Let the sparrows spit upon his memory. It has nought to do with us.[26]

—Cersei Lannister to the small council

Walder has outlived seven wives, and is currently married to his eighth wife. He has over a hundred descendants, both trueborn and baseborn. He has had twenty-two trueborn sons and seven trueborn daughters from his marriages, with an unknown number of bastard sons and daughters.

Descendants of her third son Aenys Frey and her daughter Perriane Frey: