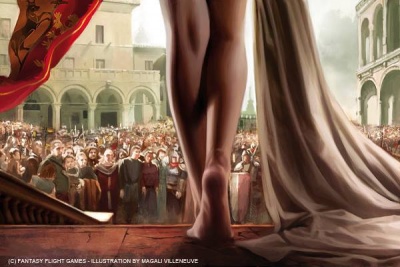 Cersei Lannister disrobing before the walk of shame. ©FFG 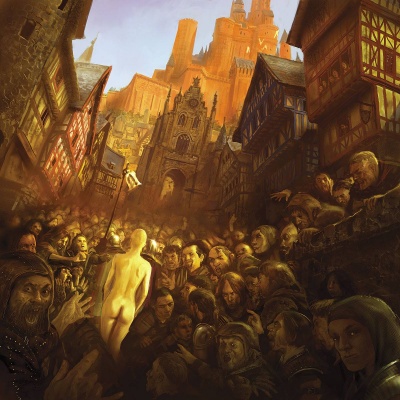 A walk of atonement[1] is a punishment in the Seven Kingdoms usually reserved to punish, humiliate and shame a woman publicly for either adultery or whoring. The custom is usually performed as both a punishment and a way to degrade a woman and rob her of her pride and power.

During the Dance of the Dragons, after Rhaenyra Targaryen fled the capital, Mysaria was taken while attempting to flee the Red Keep after Ser Garth the Harelip surrendered the castle to Ser Perkin the Flea and his gutter knights. Perkin informed Mysaria that if she could travel naked through the city to the Gate of the Gods while being whipped, she would be allowed to live. Mysaria only made it half way before dying on the city's cobblestones.[2]

When Tywin Lannister's father Tytos died, Tywin found his father's mistress trying on one of the gowns of his late mother, Jeyne Marbrand. A common-born woman and the daughter of a chandler, the mistress had dominated Tytos utterly, ordering the household knights about, dismissing servants, and helping herself to Jeyne's jewelry.[3][4] Expelling the mistress from Casterly Rock, Tywin had her stripped naked and forced the sobbing woman to walk through the streets of Lannisport into exile at the docks, confessing to every man she met that she was a thief and a harlot.[5][1][4]

Cersei Lannister is forced to perform a walk of atonement by the High Septon of the Faith of the Seven from the Great Sept of Baelor to the Red Keep. Cersei is shaved of hair from her entire body, then stripped naked. An escort of Warrior's Sons, Poor Fellows, and several septas protect her from the leering and jeering crowds that have flocked to see her shame.[1]

Vain and proud she was, before so haughty you'd think she's forgot she came from dirt. Once we got her clothes off her, though, she was just another whore.

They think that this will break my pride, that it will make an end to me, but they are wrong.

—Cersei Lannister's thoughts during her walk[1]

Cersei was soiled goods now, Her power at an end.

—Kevan Lannister after his niece's walk.[4]

All the self-seekers who had named themselves her friends and cultivated her favor had abandoned her quickly enough when Tywin had her stripped naked and paraded through Lannisport to the docks, like a common whore. Though no man laid a hand on her, that walk spelled the end of her power. Surely Tywin would never have dreamed that same fate awaited his own golden daughter.

George R. R. Martin may have been inspired by penitential walks, such as the three barefoot walks of Eleanor Cobham and the kirtle-clad walk of Jane Shore.