War of the First Men and the children of the forest 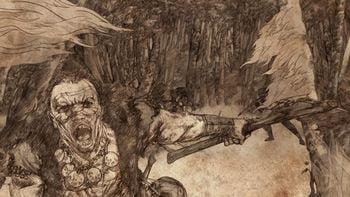 First Men cut down trees and burned them, from Game of Thrones Blu-ray

The war of the First Men and the children of the forest took place during the Dawn Age. 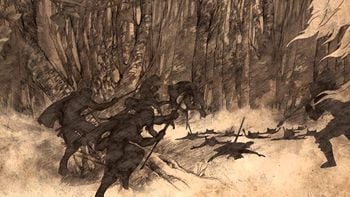 First Men slay the children of the forest, from Game of Thrones Blu-ray

The two races fought a desperate war for dominance over hundreds[3] or thousands of years.[1] The wood dancers were the hunters of the children,[3] and the diminutive people were said to have turned trees into warriors.[4] The greenseers of the children called upon beasts to fight on their behalf, including cave lions, direwolves, eagles, mammoths, serpents, and snow bears.[3] While the children used bone, wood, and dragonglass, the bigger and stronger First Men were equipped with bronze swords and armor and rode horses.[2][3][5] The humans also fought against giants.[5]

As the children were gradually losing ground, their greenseers are said to have gathered at Moat Cailin[3] or the Isle of Faces.[5] According to legend, they used magic and called the hammer of the waters upon the Arm of Dorne, resulting in the Breaking of the land bridge into the Broken Arm and the Stepstones.[5] The hammer of the waters also flooded the Neck into a swamp.[3]

The hammer of the waters did not end the war, however, as the First Men already in Westeros were too numerous. After generations of warfare, before they fought one another to a standstill, the two sides agree to a truce, signing the Pact on the Isle of Faces. They agreed to peacefully coexist, granting the open lands to humanity and the forests to the children.[3]

In time, the First Men abandoned the gods they had brought from Essos and adopted the gods of the children of the forest. With the signing of the Pact, the Dawn Age ended and the Age of Heroes began. The Pact lasted for four thousand years before the enigmatic Others invaded from the Lands of Always Winter, bringing death and destruction to both races in the Long Night. The Pact between the children and humanity ended with the arrival of new invaders, beginning with the coming of the Andals.[2]

The old songs say that the greenseers used dark magics to make the seas rise and sweep away the land, shattering the Arm, but it was too late to close the door. The wars went on until the earth ran red with blood of men and children both, but more children than men, for men were bigger and stronger, and wood and stone and obsidian make a poor match for bronze.[2]