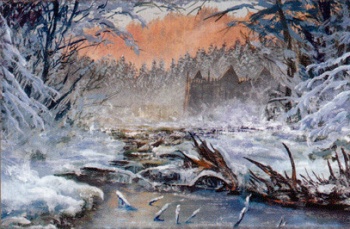 The Weeping Water is a river between the Last River, the Lonely Hills, and the Sheepshead Hills in the north. The Dreadfort, the seat of House Bolton, lies along the river, which flows southeast into the Shivering Sea.[1]

In wintertime, stones in the icy Weeping Water become half frozen.[2] There is ice fishing on the northern rivers.[3]

During the coming of the Andals, Theon Stark, King in the North, allied with the Boltons to crush Argos Sevenstar and his Andals in the Battle of the Weeping Water.[4]

While foxhunting along the Weeping Water, Lord Roose Bolton raped and impregnated a miller's wife; the child of the rape was Ramsay Snow. After returning from the Redfort, Domeric Bolton rode up the river to befriend Ramsay. Domeric eventually died of poison.[2]

Theon Greyjoy remembers escaping from the Dreadfort with Kyra, stumbling over stones in the icy river, and kissing her after they reached the other side. The escape turned out to be a hunting game devised by Ramsay Bolton, however.[5]