Ser Wendel Manderly is a knight of House Manderly. He is the second son of Wyman Manderly, Lord of White Harbor.

Wendel has a large walrus mustache and is bald.[3] He is not quite as fat as his father, Lord Wyman, and older brother, Ser Wylis, but he is still considered immense.[3] His face is shaped like the moon.[4]

Wendel is loud and boisterous[3] with a booming voice.[5] A protective man,[6] he is a prodigious eater who values his honor highly.[4]

Ser Wendel accompanies his brother, Wylis, to the muster when Robb Stark calls his banners. They escort Catelyn Stark from White Harbor to Robb's encampment at Moat Cailin.[3]

Wendel stays with Robb's force on the march south and is named as one of his personal guard during the battle in the Whispering Wood.[8] Robb is proclaimed King in the North at Riverrun.[9] 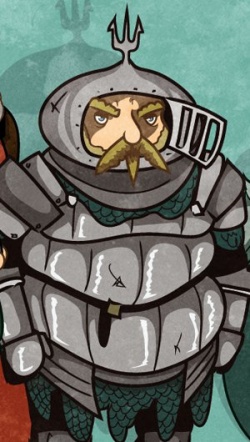 Lord Wyman considers marrying Wendel to Lady Donella Hornwood in order to claim the Hornwood lands following the deaths of her husband, Lord Halys, and son, Daryn.[7] Donella is abducted by Ramsay Snow, however.[10]

Wendel is one of Catelyn's escorts after she leaves Riverrun to meet with Renly Baratheon, and he offers to hunt quail for her during the journey south. Wendel is entertained by the melee at Bitterbridge.[4] They continue on to Storm's End after Renly learns his castle is under attack by his brother, Stannis Baratheon.[5]

At a sept near Storm's End, the quiet Ser Robar Royce and the loud Wendel discuss the upcoming battle between Renly and Stannis. Renly is assassinated by a shadow in his pavilion, however, and Robb's envoys flee Storm's End.[5] Since Brienne of Tarth discards her clothing stained with Renly's blood, Wendel gives some of his spare garb to the woman.[11]

Catelyn's party returns to Riverrun, and Wendel cheers when he hears of Robb's victories in the westerlands.[11]

After Robb breaks his marriage contract with House Frey by wedding Jeyne Westerling, Wendel offers to marry a daughter of Lord Walder Frey as part of an apology to the Freys. Catelyn does not believe that Walder would be placated by a second son like Wendel, however.[12]

Wendel commands Robb's baggage train during the journey from Riverrun to the Twins for the wedding of Lord Edmure Tully to Roslin Frey.[13] Wendel eagerly eats a leg of lamb during the wedding feast, and Walda Frey tells him of her own marriage to Lord Roose Bolton.[14] When the Freys and Boltons betray Robb with the Red Wedding, Wendel is killed by a crossbow quarrel to his mouth.[14]

Wendel's bones are returned to his father by a trio of Freys—Rhaegar, Jared and Symond—who also come to ensure White Harbor bends the knee to King Tommen I Baratheon. Wendel's remains are interred in the Sept of the Snows.[15] Jared tells the Merman's Court that Wendel saved Lord Walder Frey from the warg Robb Stark, at which Lord Davos Seaworth scoffs.[16] In private, however, Lord Wyman Manderly confides in Davos that he seeks vengeance against the Freys for his son's death.[17]

Wendel: There are birds in this grass. Would you fancy a roast quail to break your fast this morning?


Catelyn: Oats and bread are sufficient ... for all of us, I think. We have many leagues yet to ride, Ser Wendel.


Wendel: As you will, my lady. Oats and bread, and what could be better?[4]
—Wendel and Catelyn Stark

Nothing's more like to bring a Lannister running than a threat to his gold.[11]

He was one of the fattest men Catelyn had ever known, but howevermuch he loved his food, he loved his honor more.[4]

Wendel was always a brave boy. I was not surprised to learn he died a hero.[16]

My son Wendel came to the Twins a guest. He ate Lord Walder's bread and salt, and hung his sword upon the wall to feast with friends. And they murdered him. Murdered, I say, and may the Freys choke upon their fables.[17]