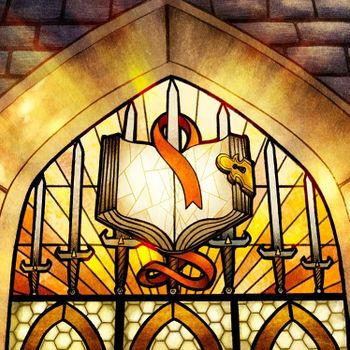 The White Book, formally called The Book of the Brothers, is the tome that records the deeds of every member who has ever served in the three hundred year history of the Kingsguard. 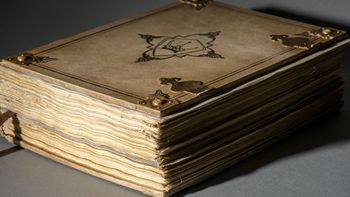 The White Book, as depicted in Game of Thrones 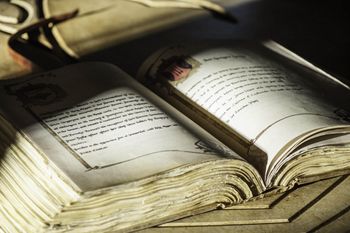 The White Book, open to the pages for Duncan the Tall and Gwayne Gaunt, as depicted in Game of Thrones

The White Book is two feet tall, a foot and a half wide, and a thousand pages thick. It is made of fine white vellum pages bound between covers of bleached white leather, with gold hinges and fastenings. The book is kept in the Red Keep in the White Sword Tower, where the knights of the Kingsguard have their sleeping cells. The book is in the common room on the first floor of the tower, in the room where the seven meet. It is the responsibility of the current Lord Commander of the Kingsguard to update the entries in the book.[1]

Each member has one page to record his deeds and exploits in. Each knight who has been made a member of the Kingsguard since the reign of King Aegon I Targaryen has a page within the book detailing his deeds. On the top left-hand corner of the page his personal arms are drawn, while at the bottom right-hand corner are the arms of the Kingsguard. The drawings are done by septons from the Great Sept of Baelor, who are sent three times a year.[1]

Ser Terrence Toyne's treason and the deceits of Ser Lucamore the Lusty are recorded in the White Book, but there is no hint of a woman on Prince Lewyn Martell’s page.[2]

Ser Jaime Lannister, the Lord Commander of the Kingsguard, observes that Ser Barristan Selmy took time to update the White Book before he fled King's Landing. He feels that his own page is scant by comparison.[1]

The one-handed Jaime later awkwardly updates his own entry.[3]

Ser Barristan of House Selmy. Firstborn son of Ser Lyonel Selmy of Harvest Hall. Served as squire to Ser Manfred Swann. Named "the Bold" in his 10th year, when he donned borrowed armor to appear as a mystery knight in the tourney of Blackhaven, where he was defeated and unmasked by Duncan, Prince of Dragonflies. Knighted in his 16th year by King Aegon V Targaryen, after performing great feats of prowess as a mystery knight in the winter tourney at King's Landing, defeating Prince Duncan the small and Ser Duncan the Tall, Lord Commander of the Kingsguard. Slew Maelys the Monstrous, last of the Blackfyre Pretenders, in single combat during the War of the Ninepenny Kings. Defeated Lormelle Long Lance and Cedrik Storm, the Bastard of Bronzegate. Named to the Kingsguard in his 23rd year, by Lord Commander Ser Gerold Hightower. Defended the passage against all challengers in the tourney of the Silver Bridge. Victor in the mêlée at Maidenpool. Brought King Aerys II to safety during the Defiance of Duskendale despite an arrow wound in the chest. Avenged the murder of his Sworn Brother, Ser Gwayne Gaunt. Rescued Lady Jeyne Swann and her septa from the Kingswood Brotherhood, defeating Simon Toyne and the Smiling Knight, slaying the former. In the Oldtown tourney, defeated and unmasked the mystery knight, Blackshield revealing him to be the Bastard of Uplands. Sole champion of Lord Steffon's tourney at Storm's End, whereat he unhorsed Lord Robert Baratheon, Prince Oberyn Martell, Lord Leyton Hightower, Lord Jon Connington, Lord Jason Mallister, and Prince Rhaegar Targaryen. Wounded by arrow, spear, and sword at the Battle of the Trident whilst fighting beside his Sworn Brothers and Rhaegar Prince of Dragonstone. Pardoned, and named Lord Commander of the Kingsguard, by King Robert I Baratheon. Served in the honor guard that brought Lady Cersei of House Lannister to King's Landing to wed King Robert. Led the attack on Old Wyk during Balon Greyjoy's Rebellion. Champion of the tourney at King's Landing, in his 57th year. Dismissed by King Joffrey I Baratheon in his 61st year, for reasons of advanced age.[1] 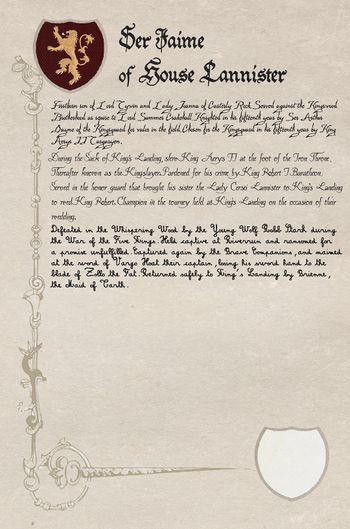 Jaime Lannister's page in the White Book, by handoftheking©

Ser Jaime of House Lannister. Firstborn son of Lord Tywin and Lady Joanna of Casterly Rock. Served against the Kingswood Brotherhood as squire to Lord Sumner Crakehall. Knighted in his 15th year by Ser Arthur Dayne of the Kingsguard, for valor in the field. Chosen for the Kingsguard in his 15th year by King Aerys II Targaryen. During the Sack of King's Landing, slew King Aerys II at the foot of the Iron Throne. Thereafter known as the "Kingslayer." Pardoned for his crime by King Robert I Baratheon. Served in the honor guard that brought his sister the Lady Cersei Lannister to King's Landing to wed King Robert. Champion in the tourney held at King's Landing on the occasion of their wedding.[1] Defeated in the Whispering Wood by the Young Wolf Robb Stark during the War of the Five Kings. Held captive at Riverrun and ransomed for a promise unfulfilled. Captured again by the Brave Companions, and maimed at the word of Vargo Hoat their captain, losing his sword hand to the blade of Zollo the Fat. Returned safely to King's Landing by Brienne, the Maid of Tarth.[3] The Knight of Flowers was still half a boy, arrogant and vain, but he had it in him to be great, to perform deeds worthy of the White Book.[5]

I'll hack the bloody book to pieces before I'll fill it with lies. Yet if he would not lie, what could he write but truth?[5]

Barristan Selmy was not a bookish man, but he had often glanced through the pages of the White Book, where the deeds of his predecessors had been recorded. Some had been heroes, some weaklings, knaves, or cravens. Most were only men—quicker and stronger than most, more skilled with sword and shield, but still prey to pride, ambition, lust, love, anger, jealousy, greed for gold, hunger for power, and all the other failings that afflicted lesser mortals. The best of them overcame their flaws, did their duty, and died with their swords in their hands. The worst... The worst were those who played the game of thrones.[6]