Ser Wylis Manderly is a knight of House Manderly. He is the eldest son and heir of Wyman Manderly, Lord of White Harbor.[4] Wylis is married to Leona Woolfield and has two daughters, Wynafryd and Wylla.[5]

Wylis is bald and has a bushy walrus mustache which covers his mouth.[4][6] Like his father, Lord Wyman, and younger brother, Ser Wendel, Wylis is an immense, fat man. The knight is almost too big to ride a horse.[4]

Wylis is quiet and formal,[4] and his wife Leona is devoted to him.[7]

Wylis's clothes are food stained,[4] and he clasps his cloak with a silver-and-sapphire trident.[6]

Ser Wylis commands the men from White Harbor when Robb Stark calls his banners, as his father, Lord Wyman Manderly, is too fat to ride a horse any longer and remains to look after the city's defenses. The Manderly levies march from White Harbor to Moat Cailin, where Robb is gathering his troops before heading south. Wylis is accompanied, apart from his younger brother Ser Wendel, by Lady Catelyn Stark, Ser Rodrik Cassel and Ser Brynden Tully, who all arrived by ship in White Harbor coming from the Vale of Arryn. Catelyn likes the brothers well enough. When they arrive near Moat Cailin, Wylis remains in the camp while Wendel rides on with Catelyn to the castle to greet Robb.[4]

The northern host marches south and arrives at the Twins, where they are greeted by Ser Stevron Frey, who invites Robb to the Twins in the name of Lord Walder Frey. Robb's bannermen, distrusting Walder, advise against Robb putting himself in the hand of the Lord of the Crossing, with Wylis suggesting that Walder should come out of his castle and treat with Robb in plain sight of both men's forces. It is ultimately decided that Catelyn will go to the Twins to talk with Lord Walder.[4]

After an agreement with Walder has been found, the northern army splits and Wylis comes under the command of Roose Bolton. The Lord of the Dreadfort marches his troops south along the kingsroad to engage Lord Tywin Lannister's main host at the Trident as a diversion for Robb, who rides southwest to lift the siege of Riverrun. Lord Bolton's forces suffer a defeat against Tywin's in the battle on the Green Fork, in which Wylis is captured[4][8] by Tywin.[6] 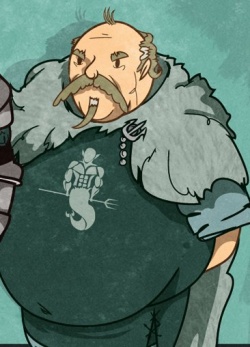 Lord Tywin Lannister offers to trade Wylis, held captive at Harrenhal, to his father without ransom, if Lord Wyman withdraws his support from Robb Stark, who is now King in the North. Wyman refuses Tywin, however.[9]

In reply to the northern peace terms submitted by Robb Stark via Ser Cleos Frey, Tyrion Lannister offers to trade Wylis and Harrion Karstark for Willem Lannister in an exchange of prisoners.[10]

While in Harrenhal, the prisoners taken in the battle on the Green Fork are housed in the upper chambers of the Tower of Dread. Most of them are given freedom of the castle when they pledge not to attempt escape and thus Wylis can start haunting the kitchens, where he is always looking for morsels of food. Arya Stark learns about this "fat lordling" from Hot Pie. Arya spots Wylis walking the walls of Harrenhal with Lord Tywin and three maesters, although she does not know his name.[6]

Tywin's host eventually departs Harrenhal.[11] The Brave Companions change sides during the War of the Five Kings and aid Lord Roose Bolton with the fall of Harrenhal.[12]

Wylis is part of Lord Roose Bolton's army when it leaves Harrenhal to Vargo Hoat and the Brave Companions. They move north to cross the Trident at the ruby ford to eventually join forces with Robb Stark at the Twins on the occasion of Lord Edmure Tully's wedding with Roslin Frey.[13]

When Roose's army arrives at the river, the ford is impassable and Roose has to ferry his men across in small boats. Wylis and the knights from White Harbor serve as rear guard during the operation. When two thirds of the force have crossed the Trident, the rest, mainly Locke, Norrey and Burley men, are suddenly attacked by Lannister forces, leading to fighting at the fords of the Trident. Wylis tries to rally the men as best as he can, but they come under attack by heavy cavalry led by Ser Gregor Clegane, who drives the defenders into the water. Many men drown, die in the fighting, or flee, while others are captured, including Wylis.[14]

While meeting with Robb Stark at the Twins, Lord Bolton claims that he was unable to help the men on the south shore.[14] Roose and Walder Frey then betray Robb during the Red Wedding,[15] a massacre countenanced by Lord Tywin Lannister.[16]

The Iron Throne negotiates with Lord Wyman Manderly about the possibility of White Harbor abandoning the northern cause and rallying behind the new Warden of the North, Lord Roose Bolton. Wyman suggests he will wed off both his granddaughters to Freys and open his harbor for ships of the Crown, but only if Wylis is returned to him safely. The small council and Queen Regent Cersei Lannister demand that Wyman execute Davos Seaworth, held prisoner by Lord Manderly, as a token of his good will.[17] Although Frey witnesses inform Grand Maester Pycelle that Wyman has executed Davos,[18] Cersei is not sure that Wylis is still alive as a prisoner at Harrenhal, as the messages sent in this regard receive no reply.[1]

When Cersei sends her resisting brother, Ser Jaime Lannister, to lift the siege of Riverrun, she lists reestablishing order at Harrenhal and getting hold of Wylis on the way as additional reasons why Jaime needs to attend personally to the matter.[1]

Upon Jaime's arrival at Harrenhal, the Mountain's men tell him of Vargo Hoat's death after Gregor Clegane's capture of Harrenhal. Rafford and Shitmouth explains that a fat prisoner continually asked for food, so Gregor had Vargo's flesh fed to the captives as "roast goat".[1] Wylis is brought to Jaime in a ragged and filthy condition, broken in spirit. When he tells Wylis that he will be escorted to Maidenpool and put on a boat to White Harbor, Wylis collapses in tears. It takes four men to lift him up again.[1]

Jaime sends Wylis to Maidenpool with a party that includes some Brave Companions and is under the command of Ser Ronnet Connington, whom Jaime wants to get rid off after Ronnet made insulting remarks about his former betrothed, Brienne of Tarth.[19][20]

Davos Seaworth is sent to White Harbor to negotiate a possible alliance of House Manderly with Stannis Baratheon. Upon his arrival in the city, Davos learns that the Lannisters still keep Wylis as prisoner, whereas Davos thought that both of Lord Wyman's sons were dead. Davos receives this as a bad omen for his mission, because the captivity of Wylis makes Wyman susceptible to blackmail.[21] Wyman acts hostile in their negotiations in the Merman's Court, and Wylis's wife, Leona, accuses Davos of trying to stir up more treason, although the Onion Lord realizes that she is speaking from fear. In the presence of Rhaegar, Jared, and Symond Frey, Wyman orders Davos's arrest and execution.[22]

When Wylis returns to White Harbor from Maidenpool, his father holds a welcoming feast in the New Castle. During the feast, Wyman uses the need for digestion after he ate too much as excuse for a secret meeting with Davos to inform him about the background of his long imprisonment in the Wolf's Den and to apologize for it. The late Tywin Lannister had written to Wyman, listing conditions for his safe return, mainly that Lord Manderly bend his knee to the Iron Throne and to the new Warden of the North, Lord Roose Bolton. If Wyman refused, Wylis would be executed and White Harbor would be stormed and sacked with the Manderlys extinguished. Wyman explains he had to fake Davos's execution, using another prisoner, to guarantee the safe return of Wylis and that he could not reveal this to him earlier. Wyman also apologizes for his daughter-in-law, pointing out that Wylis is the whole life of Lady Leona.[7]

At Winterfell, where the wedding of Ramsay Bolton and "Arya Stark" (actually Jeyne Poole) has taken place, Ser Hosteen Frey questions Wyman on the disappearance of the three Frey envoys, suggesting foul play by Wyman in this context. He points out that the three were Wyman's guests at White Harbor and brought his son home. Wyman is dismissive, stressing that, whereas the Freys merely returned Wendel's bones from the Red Wedding, it was Tywin who had returned the surviving Wylis.[23]

I know Wylis would not want to sit out the rest of the war. Gallant, that son of mine, and fierce as a mastiff.[9]

None had any defiance left; especially not Ser Wylis, a bushy-faced tub of suet with dull eyes and sallow, sagging jowls.[1]