Wylla Manderly is the second daughter of Ser Wylis Manderly and Leona Woolfield.[3]

Wylla has blond hair, longer than her sister Wynafryd's. She dyes it a garish green and wears it in a braid, but leaves her eyebrows blond. She has a thin and high voice.[4] She is brave.[5] 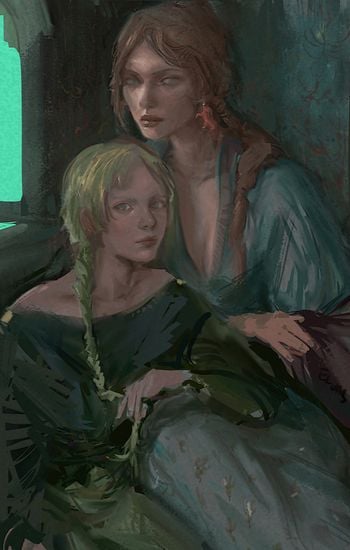 As part of the terms of White Harbor being pardoned and returning to the king's peace of Tommen I Baratheon, Wylla is betrothed to Little Walder Frey,[4] a squire of Ramsay Bolton.[6]

When Lord Davos Seaworth appears in the Merman's Court before her grandfather, Lord Wyman Manderly, Wylla stands behind him with her sister, Wynafryd. While Wyman is skeptical of Davos's call for vengeance for the death of Robb Stark in the Red Wedding, Wylla pipes out her agreement. When she announces her refusal to marry Little Walder, her grandfather threatens to send her to the silent sisters. Wylla goes on to tell of the promises of loyalty House Manderly made to House Stark when they were exiled from the Reach centuries ago. Finally, her mother, Lady Leona, has to drag her from the hall.[4]

After faking the execution of Davos and releasing him from imprisonment in the Wolf's Den, the scheming Wyman reveals his true feelings about the Freys and calls Wylla brave.[5]

Wylla's unwanted betrothal ends with the death of Little Walder at Winterfell.[7] I know about the promise ... Maester Theomore, tell them! A thousand years before the Conquest, a promise was made, and oaths were sworn in the Wolf's Den before the old gods and the new. When we were sore beset and friendless, hounded from our homes and in peril of our lives, the wolves took us in and nourished us and protected us against our enemies. The city is built upon the land they gave us. In return we swore that we should always be their men. Stark men![4]

—Wylla to the Merman's Court

Wylla. Did you see how brave she was? Even when I threatened to have her tongue out, she reminded me of the debt White Harbor owes to the Starks of Winterfell, a debt that can never be repaid. Wylla spoke from the heart ... not every woman can be as brave as my Wylla.[5]