Yohn Royce, known as Bronze Yohn, is the Lord of Runestone and the head of the senior branch of House Royce.[3] In the television adaptation Game of Thrones, he is portrayed by Rupert Vansittart.

Yohn's face is lined, and he has grey hair, slate-grey eyes, and bushy eyebrows. He is as tall as Sandor Clegane, and has large, gnarled hands.[4]

Bronze Yohn is a proud[5] and formidable[4] man, with a booming voice,[4] but the noble lord can also be solemn and quiet.[4]

Lord Royce is a tourney knight[6][7] who dons a set of bronze armor while competing. The armor is said to be thousands of years old, and its inscribed runes can allegedly ward its owner from harm.[8]

Lord Tywin Lannister offered his son Tyrion for marriage within House Royce, but was rejected.[5]

When Yohn's youngest son, Ser Waymar Royce, joined the Night's Watch in 296 AC, his father escorted him north. They stayed in Winterfell on their way, where Yohn participated in hunts, and spoke with Lady Catelyn Stark. Bronze Yohn practiced sparring with Lord Eddard Stark and Ser Rodrik Cassel, defeating one and then the other.[8][4] 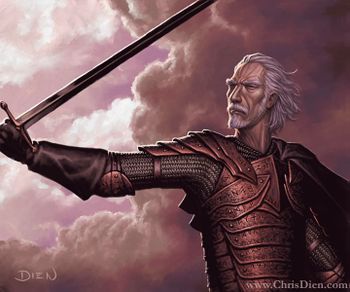 During a ranging beyond the Wall, Yohn's youngest son, Ser Waymar Royce, is killed by Others in the haunted forest.[10]

Yohn attends the Hand's tourney in King's Landing, participating with his sons, Ser Andar and Ser Robar.[8] He remains at court, with a retinue of knights and sworn swords.[1]

Yohn participates in King Robert I Baratheon's hunt in the kingswood for a white hart.[11] Lord Eddard Stark, Hand of the King, sends Robar to the kingswood to inform his father and Robert of Ser Gregor Clegane's raids on the riverlands.[12] After the hart's carcass is found, the Royces return to the capital, but Robert remains in the forest to hunt a monstrous boar.[11]

As Robert lies dying in the Red Keep after being gored by the boar, Bronze Yohn is named by Lord Petyr Baelish, master of coin, as a possible ally for Eddard against Queen Cersei Lannister in the matter of the succession, though ultimately Ned chooses to rely on the gold cloaks.[1] Petyr betrays the plan to Cersei, however.[13]

During King Joffrey I Baratheon's first court session after Ned's imprisonment, Lord Royce and his sons are listed by Grand Maester Pycelle among those required to swear fealty to the new king.[14]

Robar is slain by an enraged Ser Loras Tyrell after the murder of King Renly Baratheon.[15]

Yohn is mentioned as a suitor of Lady Lysa Arryn by Ser Kevan Lannister.[5] According to Lysa herself, Yohn is pressuring her into participating in the War of the Five Kings[16] to support Robb Stark, King in the North.[17]

After the death of Lysa, Lord Yohn brings five other nobles of the Vale—Benedar Belmore, Gilwood Hunter, Horton Redfort, Symond Templeton, and Anya Waynwood—to Runestone, where they sign a document forming the Lords Declarant. Yohn's cousin, Lord Nestor Royce, informs Petyr Baelish about Yohn's intent to question Marillion about the murder of Lysa, and to remove Petyr from his position as Lord Protector of the Vale.[18]

The Lords Declarant surround the Gates of the Moon with their hosts. Along with Nestor and Ser Lyn Corbray, they ascend the Giant's Lance to meet with Lord Baelish at the Eyrie. Sansa Stark worries that Yohn may recognize her from his visit to Winterfell a few years earlier, but Nestor tells his cousin that she is Petyr's natural daughter, Alayne Stone. Yohn declares his intent to foster the young Robert Arryn, Lord of the Eyrie, at Runestone as his ward and squire, which Petyr is reluctant to support. When Lyn draws Lady Forlorn against Ser Lothor Brune, an angry Yohn intervenes to prevent bloodshed. Still, Petyr blames the Lords Declarant for Lyn baring steel during a parley. When the other Lords Declarant allow Lord Baelish a year more to prove himself as Lord Protector, Yohn departs the Eyrie in anger. Afterwards, Petyr reveals to Sansa that Lyn is secretly in his employ. Petyr believes Yohn will be the only member of the Lords Declarant remaining opposed to his plans, but Lord Royce should not be a threat by himself.[4]

News reaches Sisterton and White Harbor about Lord Yohn vowing to remove Petyr from power in the Vale of Arryn.[19]

Lord Baelish is convinced Yohn warned Ser Harrold against him before the young knight travels to the Gates of the Moon to participate in the tourney for the Brotherhood of Winged Knights.[20]

Petyr: My lords, I am with you, heart and hand. Show me where to sign, I beg you.


Yohn: We did not come for your signature. Nor do we mean to bandy words with you, Littlefinger.


Petyr: What a pity. I do so love a nicely bandied word.[4]
—Petyr Baelish and Yohn

I mean to take the boy with me to Runestone, and raise him up to be a knight that Jon Arryn would be proud of.[4]

I like it not, but it would seem you have your year. Best use it well, my lord. Not all of us are fooled.[4] 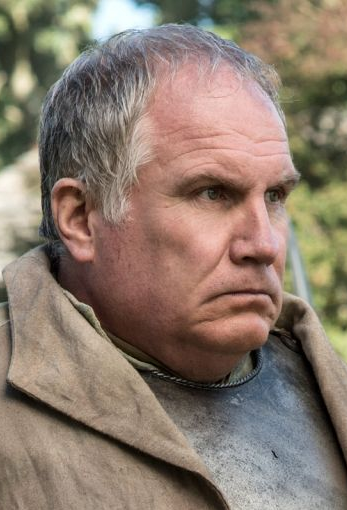 Rupert Vansittart as Yohn Royce in Game of Thrones

His armor is bronze, thousands and thousands of years old, engraved with magic runes that ward him against harm.[8]

Yohn Royce, Lyn Corbray, Horton Redfort... these are dangerous men, each in his own way. And proud.[5]

Though his hair was grey and his face lined, Lord Yohn still looked as though he could break most younger men like twigs in those huge gnarled hands.[4]

Lord Yohn raised three fine sons of his own, there is no man more fit to foster his young lordship.[4]

Our cousin Bronze Yohn had himself a mêlée at Runestone, a small one, just for squires. It was meant for Harry the Heir to win the honors, and so he did.[2]

Yohn has three sons, Ser Andar, Ser Robar, and Ser Waymar, and several daughters, including Ysilla.[8][2] Yohn also has granddaughters.[2] Yohn refers to Nestor Royce, the senior member of a cadet branch of House Royce, as his cousin.[4]

Yohn Royce on the Game of Thrones wiki