From A Wiki of Ice and Fire
Jump to: navigation, search
For the commander at the Battle by the Bloody Pool, see Yoren Yronwood.

Yoren is a sworn brother of the Night's Watch. A recruiter, or wandering crow, he travels the Seven Kingdoms, and is responsible for collecting recruits and prisoners who would take the black. He then escorts them to Castle Black for training.[1] In the television adaptation Game of Thrones he is portrayed by Francis Magee.

Yoren is stooped and sinister with a twisted shoulder.[1] His coarse and ugly features are hidden behind a thick and matted black beard.[1] Yoren has hard black eyes.[2]

The recruiter is lice-ridden and smells foul, wearing garments that are tattered and have long since faded to grey.[1][3] Yoren carries dirk,[4] sword,[5] and a black-bannered staff representing the Night's Watch.[6]

Yoren is hard and grim, and he has little patience for fools.[3] He is not the most refined person but is loyal and trustworthy.[7] Yoren's manners are brusque and he does not mince his words. However, he believes in the rules of the Night's Watch and laments the fact that the order is not treated with the same respect it used to be. He frequently chews sourleaf and has the habit of spitting the juice out if he wants to express contempt about something. Yoren is familiar with House Lannister guards in King's Landing.[8]

Yoren suffered a shoulder injury that made it impossible for him to fight well any longer. He has spent the past thirty years traveling the Seven Kingdoms and recruiting for the Night's Watch, losing only three recruits in that time. His travels frequently bring him to Winterfell, thus he knows the members of House Stark and has a certain loyalty to them.[7]

Yoren brought Chett to the Wall after the criminal was judged by Walder Rivers.[9] 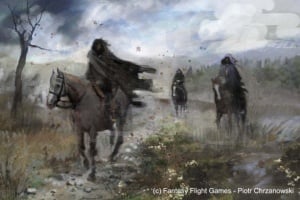 At a wooden holdfast at the edge of the wolfswood, Yoren joins the party led by Benjen Stark that is heading north to the Wall, with Tyrion Lannister and Jon Snow also coming along. Yoren brings two young rapists from the Fingers as recruits for the Night's Watch. Yoren's ragged appearance as well as his charges serve as a rude awakening to Jon, who might have thought that the Watch just consisted of noble men like his uncle Benjen.[1]

Yoren arrives at Winterfell in the company of four black brothers and Tyrion, the latter receiving a cold welcome from Robb Stark. Yoren is present when Tyrion hands over his plans for building a saddle that can carry the crippled Bran Stark. As Yoren is senior among the Night's Watch men, he is seated with Robb and Maester Luwin for dinner that night. Yoren refers to Jon as the bane of Ser Alliser Thorne, and he angers Bran by stating that the missing Benjen is probably dead.[10]

Yoren is present when Catelyn Stark arrests Tyrion at the crossroads inn, and afterwards he continues to King's Landing to inform her husband, Lord Eddard Stark, the new Hand of the King.[11] Yoren remains in the capital to gather more recruits. No knights volunteer for the Watch, so Eddard gives Yoren his pick of the king's dungeons.[12] At some point, Yoren is approached by a man who gives him gold to take a boy with him to the Wall, and after Eddard's imprisonment Yoren is told to be ready to take Eddard to the Wall.[8]

Yoren is present at the Great Sept of Baelor when Eddard publicly confesses to treason, and he recognizes Eddard's daughter Arya in the crowd. When King Joffrey I Baratheon unexpectedly orders Lord Stark to be beheaded by Ser Ilyn Payne, Yoren grabs Arya and prevents her from seeing her father's execution. Calling her "boy", Yoren drags Arya away.[2] 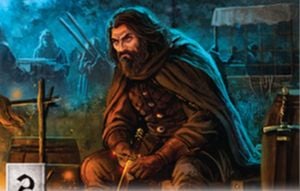 Yoren cuts Arya Stark's hair to a stubble with his dagger so she can pass as an orphan boy called "Arry". He intends to bring her with his band of recruits headed for the Wall and is going to drop her off at Winterfell. Yoren's band consists of approximately thirty people. In addition, he takes along five wagons laden with supplies as well as two coursers and a couple of donkeys for the boys.[8]

While heading north on the kingsroad, Yoren stops Arya from beating Hot Pie with a wooden sword. He strikes her behind with a stick, but gives her sourleaf for the pain. He shares how Lord Eddard Stark was supposed to join the Night's Watch and that something must have gone wrong, arousing Arya's suspicion that King Joffrey I Baratheon is responsible for her father's death.[8]

The band is confronted with refugees warning of war and armed men. Praed dies, only the fourth recruit Yoren has lost. Yoren remains undisturbed at first, insisting that the Night's Watch takes no part in the wars of the realm and that his band will be safe.[5][7]

At an inn on the kingsroad where Yoren protects Arya from revealing her northern identity, a group of gold cloaks present a warrant for Gendry, signed by Queen Regent Cersei Lannister. Yoren refuses their demand that the boy be handed over, pointing out that laws protect members of the Night's Watch. Yoren makes the unimpressed gold cloaks retreat, although they announce they will be back. Yoren gives Arya and Gendry the two coursers, advising them to flee as fast as they can if the gold cloaks reappear.[5]

Avoiding the kingsroad afterwards, the band marches west- and northwards toward the Gods Eye, which Yoren wants to pass along its western shore. The hostility of the fieldhands at Briarwhite, who take the recruits for possible looters, make Yoren increasingly bitter about disrespect shown to the Night's Watch. Yoren admits to Arya that he might have made a mistake taking orphans away from the safety of the city or, at least, not going by ship to the Wall this time.[7]

The band arrives at the eastern side of the river running south from the Gods Eye. Having no means to cross the river with their wagons, Yoren wants to rent a boat in an unnamed town on the southern shore of the Gods Eye and to cross it towards Harrentown, going on from there or finding shelter with Lady Shella Whent at Harrenhal. However, when they arrive at the town, it is deserted and no boats can be found.[6]

While Yoren stays in an abandoned holdfast overnight, a party led by Ser Amory Lorch, part of the Lannister campaign in the riverlands, arrives and torches the town. In the name of King Joffrey, Amory commands Yoren to open the gate. Again pointing out that the Night's Watch takes no part in the war, Yoren refuses, prompting Lorch to order his men to storm the holdfast and kill everyone inside. They open the attack by thrusting a spear in Yoren's direction but kill Woth instead. Yoren organizes the defense of the walls, and during the ensuing assault he kills the man with whom he had the first exchange that night. When he realizes that the attackers have won, Yoren tells Arya that she and Gendry should rescue as many boys as possible, directing her towards a tunnel they found earlier.[6]

Arya and Gendry return to the holdfast the next evening, after the departure of Amory's men, but the rest of Yoren's band has been killed. They find Yoren's body with his skull split by an axe and surrounded by the bodies of four enemies. They bury him on Arya's insistence, leaving the bodies of the others as they have no time to bury them all.[13]

Back in King's Landing, Tyrion Lannister is told by Bronn that a black brother has arrived from the Wall. Tyrion is disappointed when he learns it is Ser Alliser Thorne instead of Yoren.[14] After the fall of Harrenhal, Amory is fed to a black bear which reminds Arya of Yoren.[15]

With Yoren missing and presumed dead, Dareon is named by Jon Snow, Lord Commander of the Night's Watch, as a replacement recruiter.[16] 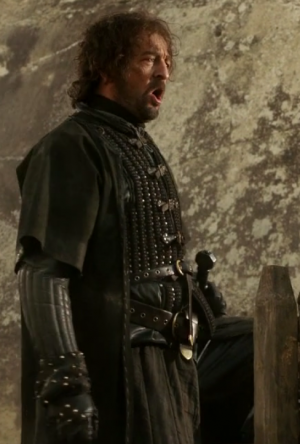 Francis Magee as Yoren in Game of Thrones

The last recruits that Yoren tried to bring to the Wall with their status and individual fate:

I'm here to find men for the Wall, and when Robert next holds court, I'll bend the knee and cry our need, see if the king and his Hand have some scum in the dungeons they'd be well rid of.[11]

There was a black brother, begging men for the Wall, only he was kind of old and smelly.[12]

—Yoren to a gold cloak

I got thirty this time, men and boys all bound for the Wall, and don’t be thinking they're like that bastard brother o' yours. Lord Eddard gave me pick o' the dungeons, and I didn't find no little lordlings down there. This lot, half o' them would turn you over to the queen quick as spit for a pardon and maybe a few silvers. The other half'd do the same, only they'd rape you first.[5]

Ser Amory pleaded and sobbed and clung to the legs of his captors, until Rorge pulled him loose, and Shagwell kicked him down into the bear pit. The bear is all in black, Arya thought. Like Yoren.[15]

Yoren had sworn to deliver her to Winterfell, only she had ended up in Harrenhal and Yoren in his grave.[17]

Yoren on the Game of Thrones wiki.