King Stannis has taken for his banner the fiery heart of the Lord of Light; a red heart surrounded by orange flames upon a bright yellow field. Within the heart is pictured the crowned stag of House Baratheon, in black.

The King in Highgarden 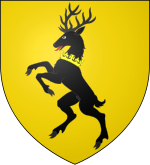 King Renly's banner is the crowned stag of House Baratheon of Storm's End, black upon a gold field, the same banner flown by his brother King Robert.

The King in the North

The banner of the King in the North remains as it has for thousands of years: the grey direwolf of the Starks of Winterfell, running across an ice-white field.

The banner of the Targaryens is the banner of Aegon the Conqueror, who conquered six of the Seven Kingdoms, founded the dynasty, and made the Iron Throne from the swords of his conquered enemies: a three-headed dragon, red on black.

House Arryn declared for none of the rival claimants at the outbreak of the war, and kept its strength back to protect the Eyrie and the Vale of Arryn. The Arryn sigil is the moon-and-falcon, white, upon a sky-blue field. Their Arryn words are As High As Honor. The Florents of Brightwater Keep are sworn bannermen to Highgarden, and followed the Tyrells in declaring for King Renly. They also kept a foot in the other camp, however, since Stannis's queen is a Florent, and her uncle the castellan of Dragonstone. The sigil of House Florent shows a fox head in a circle of flowers. Powerful, wealthy, and numerous, the Freys are bannermen to House Tully, their swords sworn to the service of Riverrun, but they have not always been diligent in performing their duty. When Robert Baratheon met Rhaegar Targaryen on the Trident, the Freys did not arrive until the battle was done, and thereafter Lord Hoster Tully always called Lord Walder "the Late Lord Frey." Lord Frey agreed to support the cause of the King in the North only after Robb Stark agreed to a betrothal, promising to marry one of his daughters or granddaughters after the war was done. Lord Walder has known ninety-one name days, but only recently took his eighth wife, a girl seventy years his junior. It is said of him that he is the only lord in the Seven Kingdoms who could field an army out of his breeches.

Balon Greyjoy, Lord of the Iron Islands, previously led a rebellion against the Iron Throne, put down by King Robert and Lord Eddard Stark. Though his son Theon, raised at Winterfell, was one of Robb Stark's supporters and closest companions, Lord Balon did not join the northmen when they marched south into the riverlands.

The Lannisters of Casterly Rock remain the principal support of King Joffrey's claim to the Iron Throne. Their sigil is a golden lion upon a crimson field. The Lannister words are Hear Me Roar!

Dorne was the last of the Seven Kingdoms to swear fealty to the Iron Throne. Blood, custom, and history all set the Dornishmen apart from the other kingdoms. When the war of succession broke out, the Prince of Dorne kept his silence and took no part.

The Martell banner is a red sun pierced by a golden spear. Their words are Unbowed, Unbent, Unbroken.

Lord Tyrell of Highgarden declared his support for King Renly after Renly's marriage to his daughter Margaery, and brought most of his principal bannermen to Renly's cause. The Tyrell sigil is a golden rose on a grass-green field. Their words are Growing Strong.

The men of the Night's Watch The Night's Watch protects the realm, and is sworn to take no part in civil wars and contests for the throne. Traditionally, in times of rebellion, they do honor to all kings and obey none.

At the Shadow Tower