A Clash of Kings-Chapter 1

Arya Stark is travelling north with Yoren of the Night's Watch, disguised as a boy. When the orphan boy known as Hot Pie tries to steal her sword “Needle,” Arya beats him bloody. Yoren takes her aside for punishment and reveals that her father was supposed to be allowed to take the black, rather than be executed. 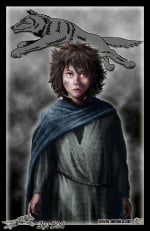 Arya Stark as Arry the orphan – by Amok©

Arya used to think her nickname of “Arya Horseface” was bad, until the orphan boy Lommy Greenhands named her “Lumpyhead” because of her lumpy, uneven haircut. Her head actually feels lumpy when she touches it.

When Yoren dragged her into an alley after her father’s execution, Arya was sure he meant to kill her. Instead, the smelly old black brother had only cut her hair and promised to deliver her to her home at Winterfell when he and his new recruits pass by. However, Yoren insisted that she pretend to be an orphan boy named Arry because half of the new recruits would turn her over to Queen Cersei quick as spit for a pardon and a few silvers, and the other half would do the same but rape her first. Yoren claimed it should not be too hard to pass as a boy; the hardest part would be passing her water in the woods alone.

There are 30 of them; some of the recruits are orphan boys recruited with promises of food and clothing, but others are criminals from the dungeons under the Red Keep. The most frightening are the three from the black cells, whom Yoren keeps chained in the back of a wagon. The five wagons contain supplies for the Wall: hides, bars of pig iron, a cage of ravens, cloth, books, paper, ink, sourleaf, oil, medicine, and spices. Yoren of the Night’s Watch – by Amok©

The gates of King's Landing were easy to pass, just as Yoren claimed. The Lannister guards were searching for the highborn daughter of the Hand of the King, not a skinny boy with his hair chopped off. Yoren called one of them by name and they were waved through. As they were leaving, Arya wished that Blackwater Rush would rise and wash away the city until she remembered her sister would be washed away, too. Instead, she decided to wish for Winterfell.

Yoren was wrong about passing water being the hardest part. The men ignore her, but the orphan boys Lommy Greenhands and Hot Pie take her silence to mean she is frightened, stupid, or deaf. Arya is two years younger and quite a bit smaller than them. One morning, Lommy and Hot Pie begin questioning Arya about her sword, “Needle,” wondering where she got it. Hot Pie sarcastically suggests that maybe she was a squire, but Lommy disagrees and argues that Needle is probably not even a real sword. Arya angrily shouts back that it is castle-forged steel, but this only gives rise to claims that she stole it. This angers Arya even more because Needle was a gift from her bastard brother Jon Snow, and she will not let them call him a thief.

Then Hot Pie gets the idea that he can steal Needle from her and Lommy encourages him. Hot Pie’s declaration that she doesn’t even know how to use a sword takes Arya back to the stable boy she stabbed during her escape from the Red Keep, but she doesn't mention the incident. The boys continue to mock her, saying that she is going to cry and wet her pants.

The Bull—an older boy with shaggy black hair and a bull-motif helmet—tells them to let her be, but Hot Pie continues. Arya attempts to diffuse the situation by offering to surrender her wooden practice sword, but Hot Pie threatens to beat her up like he did another boy and reaches for Needle. Arya uses her practice sword to whack Hot Pie’s donkey. The animal bucks and throws Hot Pie to the ground. Arya dismounts and breaks his nose with her practice sword before turning on Lommy, who cowers away in fear. The Bull shouts a warning and Arya turns to face Hot Pie. The injured boy throws a rock at her, but Arya ducks and closes the distance to strike him again on the hand, cheek, knee, and back of the head. Dazed and wounded, Hot Pie attempts to charge her, but Arya slips into a Water Dancer pose and stabs the boy in the groin.

By the time Yoren pulls her off, Arya has hit Hot Pie a dozen more times and the boy’s pants are brown and smelly. Yoren drags her off the road into a tangle of trees, cursing and muttering. There he orders her to drop her breeches and scream loudly, then whacks her several times with her own stick sword. Arya does not want to scream, but cannot help it, and her thighs and cheeks are ablaze with pain.

When he is finished, Yoren tells her that if she ever uses her stick sword on one of her companions again she will get twice what she gives. Yoren also explains that however much her punishment hurt, Hot Pie is feeling much worse. He points out that Hot Pie and Lommy had no part in her father’s death and hitting them won’t bring him back. Arya says she knows that. Yoren goes on to explain that he was set to leave when he received a message to wait for Lord Eddard, who was supposed to be allowed to take the black, only something went queer. Arya blames King Joffrey and declares someone should kill him. Yoren replies that someone will, but not him and not her.

Afterward, Arya is unable to sit a donkey for several days, but Hot Pie is unable to do anything but lie in the back of a wagon for even longer and Lommy stays as far away from her as possible. The Bull points out that Lommy twitches whenever she looks at him now. Arya does not answer since it seems safer not to talk. That night, while looking up at the sky, the Bull calls the red comet the “Red Sword,” saying that it looks like a sword fresh from the forge. Arya can see it as a sword as well, but to her it is her father’s greatsword Ice, covered with her father’s blood as it was after his head was cut off.

When she finally falls asleep, Arya dreams of Winterfell. She longs to see her mother, Robb, Bran, and Rickon, but more than anyone she misses her brother Jon on the Wall. She wishes that somehow they could come to the Wall before Winterfell, just so she could see Jon again.