A Clash of Kings-Chapter 18

In response to a secret note, Sansa takes advantage of a ruckus outside the Red Keep to sneak to the godswood, where she is disappointed to find Dontos Hollard instead of the dashing knight she prayed for. Nevertheless, Dontos says he has a plan to help her escape and take her home. On her way back, Sansa runs into a drunken Sandor Clegane, who escorts her back to her chambers.

Sansa has found an anonymous note under her pillow telling her to come to the godswood tonight if she wants to go home. She continues reading it over and over, wondering what it could mean. She has prayed so hard for a true knight to save her, but perhaps it is only one of Joffrey's cruel jokes or a clever snare to prove her disloyalty. She fears she will only find Ser Ilyn Payne waiting for her with Ice.

When her bedmaid enters unannounced to ask if she wants a bath, Sansa hurriedly hides the note. Worried the girl saw it, Sansa asks for a fire. Once the fire is lit, she orders the girl out and decides there was something sly in her eyes. Her servants are changed every fortnight to prevent her from befriending one, and Sansa is sure they all spy on her. Once alone, she burns the note.

From her window, Sansa sees Ser Preston Greenfield pacing the drawbridge of Maegor's Holdfast. She is free to roam the whole Red Keep, but Ser Preston will still ask where she is going at this time of night. Unable to think of a lie, Sansa crawls into bed instead, but her thoughts keep her awake. She wishes there was someone to tell her what to do. She misses Septa Mordane and her best friend Jeyne Poole, and even her sister Arya, who she is sure is back in Winterfell by now.

Hearing shouting, Sansa looks out to see armed men running to the wall and Ser Preston gone from the drawbridge. Wondering what she is doing, Sansa dresses quickly and hides her meat knife under her cloak. After darting across the undefended drawbridge, she passes men arming in the yard and sees three Kingsguard helping Joffrey into his armor. Fortunately, Joffrey is busy calling for his weapons and does not see her.

The sounds fade as Sansa rushes towards the godswood, never daring to look back for fear of Joffrey. The godswood is quiet and there is a wild feel to it even in the heart of the city, and Sansa can feel the old gods watching her. She prefers her mother's gods--with their artwork, incense, rainbows, and rich fabrics and gems--but the godswood has a certain power too, especially by night.

Fearing she is too late, Sansa is surprised by the voice of Dontos Hollard saying he feared she would not come. When he reaches for her, Sansa shrinks back and reaches for her knife. Dontos insists he only wants to help her as she helped him. Sansa asks if he is drunk and Dontos admits he had a cup of wine to help his courage. Drawing her knife, Sansa asks who sent him. Dontos swears on his knight's honor that he came on his own, but Sansa recalls Joffrey's decree and says she prayed for a knight to save her, not a drunken old fool. Dontos accepts the rebuke, but says he hopes to find it in himself to be a knight again because of her, adding that Sansa not only saved him from Joffrey, but also from himself.

Dontos reminds her that Florian was both a fool and the greatest knight of all. He falls to his knees and asks to be her Florian. Still unsure, Sansa asks how he plans for her to escape. Dontos explains that the hardest part will be getting her out of the castle. Then a ship could take her home, but he needs to find coin and make arrangements without raising suspicions, which will take time since he is also watched. When Sansa puts away her knife, Dontos rises and laments that he did nothing to save her father. He then declares that he is not a hero like Ryam Redwyne or Barristan Selmy and has won no glory in war or tourney, but Sansa has reminded him what it is to be a knight. He pledges himself to her and vows to the old gods that he will send her home.

Assured by his solemn oath, Sansa agrees to put herself in his hands. Then she asks if he will send another letter to let her know when, but he says that would be too dangerous. Instead, he instructs her to come to the godswood as often as possible since nowhere else is safe. She agrees, and promises to be brave, strong, and patient above all. Dontos urges her to leave, and Sansa kisses him softly on the cheek and calls him, "My Florian," certain that the gods have heard her prayer. 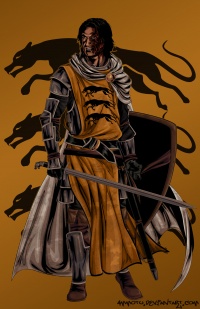 Sandor "The Hound" Clegane - by Ammotu©

On her way back, giddily thinking about home and the songs about Florian and Jonquil, Sansa caroms into Sandor Clegane. The Hound catches her before she can fall and asks if she wants to kill them both on the serpentine steps. When he asks what she is doing out so late, Sansa stutters that she was praying for her father and the king. The Hound replies that he is not drunk enough to believe that story, adding that although she is nearly a woman, Sansa is still just a little bird singing the songs they taught her. He mockingly asks her to sing him a song about knights and fair maids, and asks if she likes knights. Sansa answers true knights, but the Hound mocks her and reminds her he is not a knight at all. Reeling and almost falling, the Hound curses that he had too much wine, then offers to take Sansa back to her chambers. He pushes her gently and follows her down the steps.

Upon their return, they find Ser Boros Blount guarding the drawbridge. Sansa flinches away, but the Hound insists Blount is not to be feared. When Ser Boros asks why she is not in her chambers, Sansa's lie about the godswood sounds more convincing than before. The Hound adds that she could not be expected to sleep with all the noise. Ser Boros explains that preparations for Tyrek Lannister's wedding feast have convinced some wretches that they should feast, too. He adds that Joffrey led a sortie that sent the fools scurrying. Clegane states, "A brave boy," but Sansa wonders how brave Joffrey will be when he faces her brother Robb.

After crossing the drawbridge, Sansa asks why the Hound lets people call him a dog but never a knight. He replies that he likes dogs better, and explains that his grandfather was a kennelmaster at Casterly Rock who received lands and a towerhouse for saving Lord Tytos Lannister from a lion, losing a leg and three dogs in the process. He adds that a dog will die for you and never lie to you, which is more than little birds can do. When he adds that he never got his song, Sansa suggests a song about Florian and Jonquil. The Hound dismisses it as a song about a fool and his cunt, but insists he will have a song from her one day, whether she wants to or not. Sansa replies she will sing for him gladly, but Clegane retorts,

Pretty thing, and such a bad liar. A dog can smell a lie, you know. Look around you, and take a good whiff. They’re all liars here... and every one better than you.”