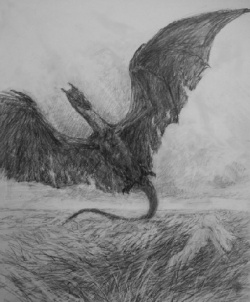 Daenerys is walking back south through the Dothraki Sea towards Meereen, following a small rivulet that she thinks will flow into the Skahazadhan. She has spent her time flying Drogon,[1] but could not make him take her back.

Instead, they have been staying at his lair, a small cave in a hill she named Dragonstone as a reference to the place where she was born. She gets sick on the way,[2] and has a number of hallucinations as she lies in the grass, bleeding and dying. These include a vision of Quaithe, of Viserys Targaryen, and of Jorah Mormont, and seem to revolve around the idea of forgetting who she is.

Finally, a single Dothraki scout approaches her, but does not see her. The scout freezes as Drogon approaches, and then flees. Daenerys calls out for Drogon as he flies over, and mounts him. Drogon catches and devours a horse, and Dany joins him. This is how Khal Jhaqo, former ko of Khal Drogo,[3] accompanied by 50 of his warriors, finds her.