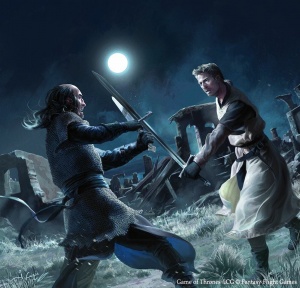 Aware that Cersei is trying to rid herself of him, Jaime argues that his place is beside the king, not off laying siege to Riverrun. But his sister responds that she can't rely on Daven, and needs Jaime to defeat Brynden Tully, as well as find out why Gregor's men at Harrenhal have not released Wylis Manderly as the crown requested. She states that Osmund Kettleblack will command the Kingsguard in his absence, although Jaime dislikes the idea.

Jaime's command consists of Kennos, Dermot, Strongboar, Red Ronnet, as well as Ilyn Payne and Addam Marbrand, whom Jaime demanded as concessions from his sister.

On the first night, they guest at Castle Hayford, and Jaime considers the fate of his cousin Tyrek, who would be lord of the castle were he not missing. He thinks it possible the boy is still alive, perhaps having been secreted off by command of Varys, who very well could have known that the riot would occur.

Starting that night, Ser Jaime begins training every night with Ilyn Payne, in the hopes that he can become a proficient swordsman with his left hand. The company also visits Sow's Horn and meets with Ser Roger Hogg.

Arriving at Harrenhal, Jaime has Gregor Clegane's men release all prisoners, including Wylis Manderly, and then leaves Ser Bonifer Hasty and the Holy Hundred to hold the castle until Petyr Baelish takes up its lordship. Jaime commands Bonifer to kill Sandor Clegane or Thoros of Myr if either are captured, but requests he send him any Bloody Mummers or Beric Dondarrion should they fall into his hands.

Outside, Jaime comes across Ronnet Connington, who mentions how he once was betrothed to Brienne. When Ronnet mocks Brienne, Jaime hits him in the face with his golden hand and insists he call her by name.