Catelyn and Ser Rodrik arrive in King's Landing by ship. At a secret meeting with Petyr Baelish and Varys, Catelyn is told the assassin's knife belonged to Tyrion Lannister.

As their ship Storm Dancer prepares to dock in King's Landing, Catelyn is joined on deck by Ser Rodrik Cassel. Catelyn notes that Rodrik looks much better than he has for days. Rodrik has been chronically seasick throughout the voyage, forcing him to shave his befouled cheek whiskers. 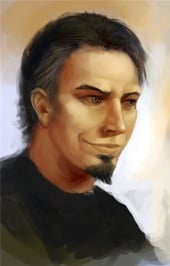 After Captain Moreo Tumitis leaves them, Catelyn and Rodrik discuss how to go about their investigation of the dagger. Catelyn suggests speaking to the Red Keep's master-at-arms, Ser Aron Santagar, who may recognize the weapon. Rodrik reminds Catelyn that they must be careful she is not recognized. This brings Lord Petyr Baelish, the king's master of coin, to Catelyn's mind. Baelish—still known by the nickname “Littlefinger” given to him by her brother Edmure—was raised with her at Riverrun as her father Hoster's ward. They had been close until Petyr had challenged Catelyn's betrothed, Brandon Stark, for her hand. Brandon had only spared Petyr because Catelyn had pleaded for his life. After his recovery, Petyr had been sent away and Catelyn has not seen him since. Rodrik proposes that he go to the Red Keep alone because, without his whiskers, he is unrecognizable even to the few who might know him.

After they disembark, Catelyn and Ser Rodrik move into a modest old inn suggested by the ship's captain. After Rodrik leaves, Catelyn tries to get some sleep but is woken by the City Watch of King's Landing. They show her a seal depicting a mockingbird in grey wax, the sigil of Petyr Baelish. As she prepares to accompany the soldiers (who do not recognize her), Catelyn wonders how Petyr knew she was in King’s Landing and settles on Storm Dancer's captain as the culprit.

Catelyn is escorted to a tower room occupied by Petyr. When Catelyn asks how he knew she was in the city, Petyr replies that Varys knows everything that happens in the city. He does admit, however, that Varys does not know the reason for Catelyn's visit. Catelyn lies that she merely yearned to see her husband and daughters. Petyr does not believe this for a moment and asks Catelyn to let him help.

Before Catelyn can answer they are joined by Varys. After profuse courtesies, Varys asks to see the dagger. Catelyn is astounded by Varys's knowledge of things no one could possibly know and produces the dagger for inspection. Upon examining the weapon, Petyr reveals that it once belonged to him until he lost it betting on Ser Jaime Lannister in the tourney on Prince Joffrey's name day. Petyr explains that when Jaime was unhorsed by Ser Loras Tyrell, Petyr's dagger was won by Tyrion Lannister.

This page uses content from Wikia. The original content was at A Game of Thrones: Chapter 18. The list of authors can be seen in the page history. As with A Wiki of Ice and Fire, the content of Wikia is available under the GNU Free Documentation License.