During his first ride outside Winterfell since his fall, Bran learns of Jaime Lannister’s attack on his father. Robb goes ahead to find the direwolves and Bran is attacked by six outlaws. Robb returns with the direwolves and defeats all but one. The last man holds a dagger to Bran’s throat until Theon kills him with an arrow from behind. Osha, the only survivor, is taken captive.

Bran is finally getting to ride outside of the castle in the oversize saddle that Tyrion Lannister designed for him. He has been riding a horse he named Dancer in the yard for the past fortnight, getting bolder each time. With his legs unable to grip, the swaying motion of the horse makes him unsteady at first, but the straps around his chest and thighs prevent him from falling. Soon Bran gets into the rhythm and his anxiety fades into a tremulous smile.

Bran would have preferred to have gone out with just Robb, but neither Maester Luwin nor the new captain of guard, Hallis Mollen, would allow it. The party includes Robb, Joseth, Theon Greyjoy, Luwin, and the direwolves, Summer and Grey Wind. As they pass through the village, Theon calls out to two serving wenches by the ale house. When one of them blushes, Theon declares to Robb that she squirms like a weasel in bed but blushes if you say anything to her in the street. Before Theon can continue his ribald story, Robb insists he not talk about such things around Bran. Bran notes that Robb seems to admire Theon, but Bran has never warmed to him.

Bran asks to go faster, and Robb agrees and spurs his own horse. Bran brings Dancer to a gallop, and catches up to Robb at the edge of the wolfswood. Bran exclaims his excitement at being able to ride, and Robb smiles, but Bran can tell something is bothering his brother. Robb notes that something is bothering the direwolves as well before admitting there was a raven the night before. The news recently from the ravens has not been good: Uncle Benjen has still not been found and their mother has taken Tyrion Lannister captive. Bran remembers Robb sending riders with commands throughout the north. Nobody had told him what was happening, but Bran knew it was about the Lannisters and not good. There is something about the Lannisters that Bran knows he ought to remember, but when he tries to think what it is he becomes dizzy and his stomach clenches.

Robb explains that the message was from Alyn in King's Landing. Heward, Wyl, and Jory Cassel have been murdered by the Kingslayer. Bran cannot understand why anyone would kill Jory, whom he remembers chasing him across the roofs of Winterfell. Robb continues solemnly that their father's leg was shattered in the fight and he has not woken since. Robb promises Bran that he “will not let this be forgotten.” Theon advises Robb to call the banners. Bran exclaims that only the lord can call the banners, but Theon replies that if Eddard dies, Robb is Lord of Winterfell. Robb notes to Bran that the honor of the north is in his hands. Bran asks if Maester Luwin agrees with calling the banners, and Theon calls the maester as timid as an old woman. Bran tells Robb that their father and mother both listen to the maester's council; Robb states that he listens to everyone.

The joy of the ride is over and Bran asks if they can go back because he is cold. Robb states that first they need to find the wolves, so the brothers ride into the wolfswood while Theon falls back to talk with a guardsman. Bran enjoys riding his horse in the woods while Theon and the guardsmen fall further behind. When they come to a stream, Robb asks Bran what is troubling him. Bran admits that he remembers Jory bringing them here to fish with Jon Snow. Bran asks if they will ever see Jon again and Robb reminds him that even Uncle Benjen came to visit. Then the wolves howl and Robb rides off to get them, asking Bran to stay there. 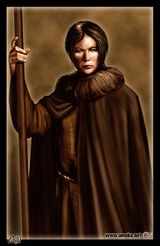 Bran is getting anxious about the others when four ragged men and two women surround him. Bran can tell they are neither foresters nor farmers and suddenly he remembers how richly he is dressed. The biggest man asks if he is lost and Bran says that his guard will be along shortly. Bran, seeing their clothes, believes that the rags could be the black of the Night's Watch; he remembers that his father said deserters are dangerous because they know their life is forfeit.

The outlaws demand his silver pin and his horse. When Bran tries to explain that he cannot dismount, they do not believe him. The big man, whom the others call Stiv, grabs the reins before Bran thinks of turning and riding off. Finally, the tall woman, Osha, sees the straps. The short woman named Hali asks if he is a cripple. Angered, Bran declares that he is Brandon Stark and that they had better let go of his horse or they will be dead. With Bran’s arrogant outburst, the gaunt man named Wallen proclaims that only a Stark would threaten when a smarter man would beg. Hali tells the others to cut off his cock and stuff it in his mouth. Osha tells Hali that she is as stupid as she is ugly; Mance Rayder will pay well for a kinsman of Benjen Stark. Stiv states that he does not want to go back to the white walkers, and cuts the strap on Bran’s saddle, cutting Bran’s leg in the process. Bran feels nothing, but starts to feel light headed.

Suddenly Robb calls out for them to surrender. Bran sees that Robb is still mounted, with the body of an elk over the back of his horse. The outlaws only laugh and point out that it is Robb who is outnumbered and should surrender. Then the direwolves appear at Robb’s whistle. Robb charges, killing one of the men and riding down Osha when she overextends with her spear. At the same time Grey Wind kills Wallen and the other unnamed man while Summer tears open Hali's belly. 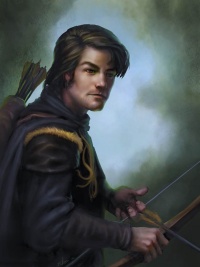 Now facing Robb and the direwolves alone, Stiv finishes cutting Bran free, hauls him from the saddle, and holds his knife to Bran's throat. Stiv tells Robb to drop his sword and Robb slowly complies. Then Stiv tells Robb to call the direwolves off, which Robb does. Bran can see that Osha is still alive. Stiv commands Osha to kill the wolves, but she refuses to go anywhere near them. Instead, Stiv orders Robb to kill the wolves. Bran screams “No,” knowing that they will be defenseless without the wolves. Suddenly an arrow from Theon Greyjoy's bow bursts through Stiv's chest and the man collapses into the stream.

The Stark guardsmen appear and Osha throws down her spear and surrenders. The guardsmen grow pale and some even vomit when they see the carnage. Theon, ever smiling, is proud of his shot, but Robb scolds him for taking such a chance with Bran’s life; he might have missed or the knife could have slipped. Then Robb turns on the guardsmen, asking where they were. They explain that at first they were waiting for Maester Luwin and Theon admits he lead them off to hunt a turkey. Robb is angrier than Bran has ever seen him.

As Maester Luwin examines Bran's wounds he points out to Robb that two of the attackers wear the black of the Night's Watch. Robb orders their heads cut off for transport back to the Wall, but orders the bodies left unburied. The question of what to do with Osha comes up. The woman drops to her knees to beg Robb to spare her, proclaiming that she will serve him. When Robb asks what use he might have for an oath-breaker, Osha insists that, as a wildling, she broke no oaths. Theon suggests that they give her to the wolves, which causes Osha to shudder and even some guardsmen to look queasy. Maester Luwin advises that they question her, so Robb orders her bound and brought back to Winterfell.