Tyrion and Bronn make camp on the high road. Tyrion wants to make a fire, but Bronn protests that it will bring the Vale mountain clans down on them. Tyrion sees no point in trying to avoid the clans and Bronn gives in. As Tyrion plans, the Stone Crows arrive and Tyrion negotiates an agreement.

Tyrion and Bronn have taken shelter beneath some aspens just off the high road. Tyrion is gathering wood and asks Bronn if a particular branch will do for a fire. Bronn asks if he has a death wish, as a fire will bring the Vale mountain clans down on them. Bronn thinks it is best to travel fast at night, avoid the road, and make no noise or fires. Tyrion states that traveling fast at night is a good way to fall down the mountain and that the clans will find them no matter what they do. Bronn replies that that means they are dead men. Tyrion insists that he would prefer to die comfortable and asks if Bronn can find some game; he does not look forward to the salt beef and hard bread that Lysa Arryn had provided them.

Bronn threatens to take Tyrion’s horse and leave, asking what Tyrion would do. Tyrion replies that he would probably die. When Bronn asks if Tyrion believes his threat, Tyrion admits he does, commenting that Bronn was quick to finish off Chiggen when he took an arrow in the belly. Bronn points out that Chiggen was as good as dead anyway and would have done the same for him.

Bronn explains that although he fought for Tyrion he is not his friend and not his servant. Tyrion accepts this with good humor, stating that he is mainly interested in Bronn's sword, not his friendship. When Bronn asks how Tyrion knew he would be his champion, Tyrion explains that he did not know, but anticipated Bronn's sellsword nature: go for the gold. Bronn helped take Tyrion captive in hopes of a reward, but the Starks are too proud to take lowborn scum like Bronn into their service permanently, so Tyrion had gambled that Bronn would abandon Lady Catelyn for the next hopeful venture: rescuing him.

Bronn tells Tyrion that he has a bold tongue and that someday somebody will cut it out and make him eat it. Tyrion replies that everyone tells him that. Tyrion then declares that although Bronn is scum, he is not stupid and knows where his best interest lie, luckily for Tyrion. When Bronn quickly lights the fire with flint, Tyrion compliments that Bronn is also useful and almost as good with a sword as his brother Jaime.

Then Tyrion asks what Bronn wants: gold, land, or women. He promises that if Bronn keeps him alive he will have it. Bronn asks about what happens if Tyrion dies. Tyrion quips that then he will have one sincere mourner. Bronn then informs Tyrion that his is no man’s toady. Tyrion replies that he is sure Bronn is no man’s friend, adding that he is sure Bronn will betray him just like Lady Stark if there is a profit. However, Tyrion begs Bronn to remember that he will match any price offered to betray him because he likes living. Bronn disappears to go hunting at Tyrion’s request.

An hour later they are eating a goat they have roasted. Tyrion complains about the meat’s toughness, but says he will not complain too loudly since at the Eyrie he would have to dance on a precipice for a boiled bean. Bronn then complains that Tyrion gave the turnkey a purse of gold and Tyrion states that a Lannister always pays his debts. He kept his silver, however. After giving the turnkey the purse, Tyrion told him that if he ever tired of Lady Arryn’s service, he need only come to Casterly Rock to get the rest. Bronn asks what Tyrion plans when they reach the river and Tyrion states a whore, a feather bed, and wine for a start and then on to Casterly Rock or King’s Landing since he has questions about a dagger. Bronn seems surprised that Tyrion is truly innocent. 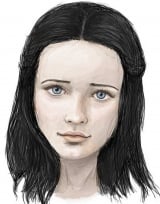 As they settle down for the night, Tyrion notes that the clansmen are taking their time. Bronn replies that he would fear a trap with them being so open. Tyrion suggests they sing to scare them away. As Tyrion whistles a song, he asks Bronn if he has ever heard it before. Bronn states he has heard it in inns and whorehouses. Tyrion goes on to say the first girl he bedded used to sing it. He tells Bronn the story of when he and his brother Jaime rescued her. They heard a scream and Tysha came running onto the road chased by two men. Jaime went after the men while Tyrion dismounted to protect the girl. He tells Bronn that she was about a year older than him, low born, half-starved, and unwashed. When Jaime left to get help from Casterly Rock, Tyrion took her to an inn where they shared a meal and talked. The wine went to 13-year old Tyrion’s head and he found himself in bed with her. When he broke her maidenhead she wept and then kissed him. He found a drunken septon to marry them and set her up a cottage of her own where they played man and wife for a fortnight. Then the septon sobered and told Tyrion’s father, and that was the end of his marriage. Jaime was forced to confess that the girl was a whore and that he set the whole thing up. Then Lord Tywin gave her to a barracks of guardsmen and paid her a silver for each one. Tywin made Tyrion go last, having him pay her a gold coin since he was a Lannister.

Bronn states that he would have killed the man who did that to him and Tyrion states that he might yet; a Lannister always pays his debts. Tyrion rolls into his shadowskin cloak to sleep, and dreams of the sky cells but this time he is the gaoler, driving his father back to the abyss. 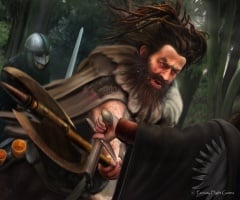 Bronn wakes him with a warning and Tyrion motions for Bronn to stay still. Then Tyrion calls out for the clansmen to join them and share their goat. A voice replies that, since this is their mountain, it is their goat. Tyrion agrees that it is and asks their names. They declare themselves Stone Crows and a big man named Shagga armed with two axes steps into the light first. Slowly the rest emerge, armed with a variety of weapons including pitchforks.

Tyrion introduces himself and declares himself a member of “Clan Lannister.” He offers to pay the clansmen for the goat they ate. Gunthor son of Gurn, who seems to be their chief, asks what he has to give them, and Tyrion tells them he has silver in his purse, and his weapons and armor. Conn replies that Tyrion is going to pay them with their own coin; they can take what they want from their corpses. Gunthor states they have nothing to give but their lives and asks Tyrion how he would like to die. Tyrion replies, “In my own bed, with a belly full of wine and a maiden’s mouth around my cock, at the age of eighty.” Shagga laughs but the others seem unamused.

Gunthor tells Conn to kill Bronn and take Tyrion to milk goats and make the mothers laugh. Bronn springs to his feet, asking who dies first, but Tyrion screams for him to stop. Tyrion asks the clansmen if their weapons are the best they could steal, declaring them good for killing sheep at most. He adds that his father’s smiths shit better weapons. Gunthor, thinking of the starving women and children of his tribe, is interested and asks what Tyrion will give them for their lives. In addition to the list of weapons suggested by the tribesmen, Tyrion offers them the Vale of Arryn.