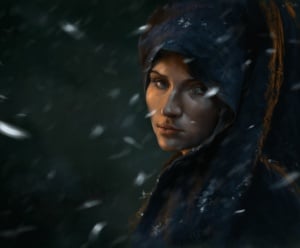 Sansa is alarmed to discover that Littlefinger has no intention of bringing her home; instead she is being taken to the Vale of Arryn. They land at the tiny tower of House Baelish that Petyr is lord of, and he stresses that Sansa must use a new name, calling her Alayne Stone so that no one will know who she really is.

She learns that Oswell is actually the Kettleblacks' father, and Littlefinger leads her to discern that it was the Queen of Thorns who poisoned Joffrey when she took one of the amethysts from Sansa's hair net. All the plans were arranged by Littlefinger, who met Lady Olenna when he brokered the alliance that joined Highgarden and House Lannister.

Soon after, Lysa Arryn arrives with a small retinue, and she insists that Petyr wed her now at his tower instead of the Eyrie. Lysa wants to make another child with Petyr, after her father aborted the first child years ago. A drunken Marillion tries to seduce Sansa that night, but Lothor Brune forces him away. The next morning, Petyr tells Alayne that Lysa now knows the girl's identity. Lysa does not like having Sansa around, although she does wish to marry her niece to her son, Robert.