From A Wiki of Ice and Fire
(Redirected from Aegon's high hill)
Jump to: navigation, search 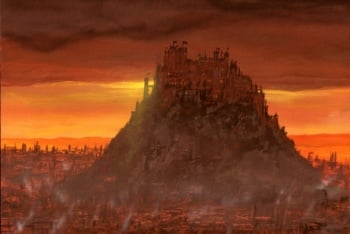 Aegon's High Hill[1][2] or Aegon's high hill,[3] also called Aegon's Hill,[4][5] is the tallest of the three hills within the city of King's Landing, the others being the Hill of Rhaenys and Visenya's Hill. Atop the hill lies the Red Keep, the great fortress that dominates the city.[3] Shadowblack Lane is a twisty route from the Red Keep to the foot of Aegon's Hill.[6] The hill and its castle command approaches to the city and the Blackwater Rush.[7]

When Lord Aegon Targaryen sailed from Dragonstone at the start of the War of Conquest, he chose the mouth of the Blackwater Rush as the site of his first base of operations. The Aegonfort, a crude wood-and-earth fortifications, was built on the tall hill that would later be given his name.[8] The city would be built later around it,[3] and King Aegon I had the Aegonfort torn down to begin the construction of the Red Keep as a more durable seat for House Targaryen.[9] Maegor I Targaryen ordered secret tunnels throughout the hill to connect with Maegor's Holdfast.[10]