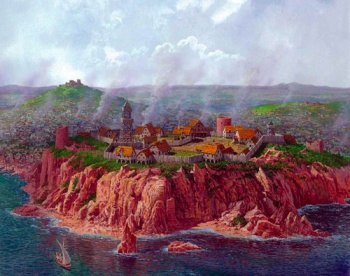 The Aegonfort, as depicted by Ted Nasmith in The World of Ice & Fire

The Aegonfort was the first fort built by Aegon the Conqueror in Westeros. It was constructed where the Red Keep now exists in King's Landing.[1]

The Aegonfort began as a motte-and-bailey fort on the top of Aegon's High Hill at the mouth of the Blackwater Rush.[2] This initial design was quickly replaced with a new log keep with walls fifty feet high[3] and a cavernous longhall below it. Across from the bailey was a stone kitchen roofed in slate, and the growing castle also had stables and a granary. Its watchtower was doubled in height. As the Aegonfort grew, it gained a barracks, an armory, a sept, and a drum tower within its palisade.[2]

The Iron Throne was installed in the smoky longhall.[2] However, the Aegonfort was only a tenth as roomy as the older castle of Dragonstone, which was also more secure and comfortable.[2]

In the aftermath of Aegon's Landing, construction began on a crude wood-and-earth castle on the top of Aegon's High Hill at the mouth of the Blackwater Rush. After defeating a dozen castles in the vicinity of Blackwater Bay, Aegon I Targaryen commanded the defeated lords to attend him at the new Aegonfort. These men laid their swords at the conqueror's feet, and the Conqueror confirmed them in their lands and titles. Aegon's knights unveiled the heraldic banner of House Targaryen for the first time, Visenya Targaryen placed a crown on Aegon's head, and Rhaenys Targaryen proclaimed him King of All Westeros.[4]

Swords of those defeated in the burning of Harrenhal and the Field of Fire were sent to the Aegonfort by wagon, and the Iron Throne was created from these melted, broken blades.[4]

The city of King's Landing developed around the Aegonfort, the seat from which King Aegon I Targaryen ruled the Seven Kingdoms.[3] Queen Rhaenys Targaryen decreed the rule of thumb after holding court in the Aegonfort.[2]

Following the First Dornish War, Aegon often resided at the Aegonfort when not participating in a royal progress, while Queen Visenya Targaryen preferred the comforts of Dragonstone, the ancient seat of House Targaryen.[5] Princess Rhaena and her brother, Prince Aegon, played together in the nurseries of Dragonstone and the Aegonfort.[5]

Over the next few decades, the Aegonfort grew larger and came to spread halfway down Aegon's High Hill. It was a mess of wood, earth, and brick which had outgrown the old log palisades.[5] In 35 AC the elderly King Aegon I came to the realization that the ramshackle pile of wood and earth that his seat consisted of was unsuited to be the seat of power for a king. Aegon moved his family back to Dragonstone, and he ordered the Aegonfort razed to the ground. Visenya and Lord Alyn Stokeworth, the Hand of the King, oversaw construction of the new castle,[5] which would become known as the Red Keep.[3]

Aenys I Targaryen was proclaimed king after his father died at Dragonstone in 37 AC. Aenys sailed to King's Landing and claimed the Iron Throne, which stood in the rubble and mud leftover from the Aegonfort.[5]

It was certainly no fit abode for a great king.[5]