Alleras, known as the Sphinx, is an acolyte studying at the Citadel in Oldtown.[3] His mother is a trader and he claims not to be a noble's son despite the claims of a few others.[1]

Alleras is slender, comely, and has a soft smile,[1] speaking with a soft Dornish drawl.[4] He has curly black hair, a widow's peak, and big black eyes.[1] Alleras has skin the color of teak[1] or a light brown ale.[4] The youth usually wears doeskin breeches and a snug green brigandine with iron studs.[4]

Alleras is in the circle of friends that includes Armen, Pate, Mollander, and Roone. He is nicknamed the Sphinx by Leo Tyrell.[1] Alleras is doted on by the serving wenches of the Quill and Tankard, including Rosey, which makes Pate jealous.[1]

Alleras has a Dornishman for a father and a Summer Islander for a mother.[1] He has been at the Citadel for a year, and has forged three links in his maester's chain, the most recent of which is copper.[1]

Having forged his copper link, Alleras celebrates at the Quill and Tankard by purchasing drinks for his friends. They practice their archery skills by shooting apples, although Alleras allows his last apple to fall into the Honeywine untouched.[1]

Having foreseen the arrival in Oldtown of Samwell Tarly with a glass candle, Archmaester Marwyn sends Alleras to the Seneschal's Court. After Sam tells his story, the Sphinx brings him to Marwyn at the Ravenry. With Maester Aemon having died en route to Oldtown, Marwyn decides to sail himself to find Daenerys Targaryen in Slaver's Bay. The archmaester tasks Alleras with looking after Sam.[4] 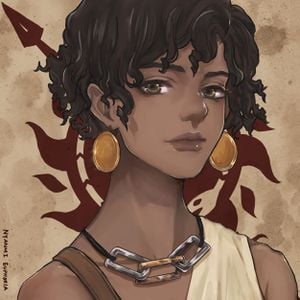 Roone: You always miss your last shot. See?
Alleras: The day you make them all is the day you stop improving.[1]

Leo: I understand you won your copper link. I'll drink to that.


Alleras: I only buy for friends. And I am no lord's son, I've told you that. My mother was a trader.


Leo: Your mother was a monkey from the Summer Isles. The Dornish will fuck anything with a hole between its legs. Meaning no offense. You may be brown as a nut, but at least you bathe.[1]
—Leo Tyrell and Alleras

Samwell: Are you a novice?


Alleras: An acolyte. Alleras, by some called Sphinx.
Samwell: The sphinx is the riddle, not the riddler. Do you know what that means?
Alleras: No. Is it a riddle?


Samwell: I wish I know.[4]
—Samwell Tarly and Alleras

It had been Lazy Leo who dubbed Alleras "the Sphinx." A sphinx is a bit of this, a bit of that: a human face, the body of a lion, the wings of a hawk. Alleras was the same: his father was a Dornishman, his mother a black-skinned Summer Islander. His own skin was dark as teak. And like the green marble sphinxes that flanked the Citadel's main gate, Alleras had eyes of onyx.[1]

The Sphinx was always smiling, as if he knew some secret jape.[1]

Evidence suggests that Alleras may be a disguised Sarella Sand, one of Oberyn Martell's bastard daughters known as the Sand Snakes.[5]