Amethyst is a gemstone, a violet form of quartz, popular for ornamentation. See also amethyst in the real world.

Amethysts are among the gems on the maester's chain of Grand Maester Pycelle.[1]

Magister Illyrio Mopatis has amethyst among his various rings.[4]

Amethysts are among the gems adorning the nose of Xaro Xhoan Daxos.[7] 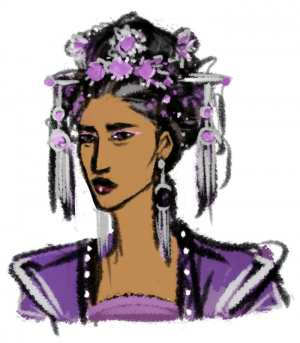 The Amethyst Empress, by eliyadoodles

The Amethyst Empress was a ruler of the Great Empire of the Dawn.[10]

During the wedding tourney at Whitewalls, Daemon II Blackfyre, disguised as Ser John the Fiddler, wore a heavy silver chain studded with huge dark amethysts which matched his eyes.[11]

Servants give Daenerys Targaryen golden bracelets encrusted with amethysts before the girl meets Khal Drogo.[12] She later has a vision of ghosts with eyes of amethyst, jade, opal, and tourmaline.[13]

Xaro Xhoan Daxos gives Daenerys a silver collar with an enchanted amethyst, which he claims will protect the girl from poison.[14] He also gives her a thousand miniature knights carved of amber, amethyst, beryl, jade, onyx, opal, and tourmaline, with armor of silver and gold.[14]

The fool Ser Dontos Hollard provides Sansa Stark with a silver hair net, decorated with what he claims to be black amethysts from Asshai. He claims it is magic that will give her justice, vengeance, and take her home.[9]

After King Joffrey I Baratheon chokes to death at his wedding feast, Sansa realizes that one of the amethysts from her hair net is missing.[15] During the trial of Tyrion Lannister for Joffrey's death, Grand Maester Pycelle states that the king was poisoned with the strangler.[16]

Sansa: What stones are these?
Dontos: Black amethysts from Asshai. The rarest kind, a deep true purple by daylight.[9]