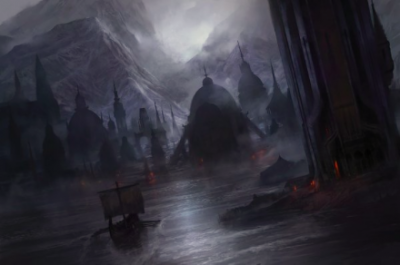 Asshai by the Shadow - © René Aigner

Asshai is a mysterious port city in the far southeast of the known part of Essos, where the Ash river meets the Jade Sea at its eastern exit, the Saffron Straits.[1] Asshai is on the southernmost edge of a mountainous peninsula known as the Shadow Lands, thus the city is often called Asshai by the Shadow[2][3][4] or Asshai-by-the-Shadow.[5] To go to Asshai can be described as to "pass beneath the shadow",[6] and the area of the Shadow Lands and Asshai are sometimes referred to simply as the Shadow.

Asshai sprawls for leagues across both sides of the Ash, and its great walls allegedly could contain Volantis, Qarth, King's Landing, and Oldtown combined. The population of Asshai, however, is no more than that of a good-sized market town. By night only one building in ten shows a light.[7]

The buildings, streets, and walls of Asshai are made out of black stone that seems to drink the light making the city appear to be a dark and gloomy place. Structures include bazaars, halls, hovels, palaces, and temples.[7]

Asshai is a popular trading destination for ships, part of the traders' circle in the Jade Sea, however not nearly as important as Yi Ti.[8] It exports goods such as amber and dragonglass.[6] Gold and gems are also common exports, though some say the gold of the Shadow Lands is as unhealthy as the fruits that grow there.[7] The city is usually traveled to by ship, but it can also be reached overland by caravans.[9]

Trading ships from Westeros and the Free Cities bound for Asshai go east through the Summer Sea and the Jade Sea, which are connected by the straits at Qarth, the Jade Gates.[10] Caravans from Asshai traverse the Bone Mountains to reach Vaes Dothrak.[9]

Aside from traders, few from Westeros visit Asshai and little is known about it. The famous scribe and traveler Lomas Longstrider never visited Asshai,[7] though he apparently heard from merchants in Yi Ti who did trade with Asshai that the vast gold of Casterly Rock was famous even there.[11]

All foodstuff and freshwater is brought in by ship, as animals brought into the city soon die, and the waters of the Ash glisten black beneath the noonday sun and glimmer with green phosphorescence by night. The only fish that dwell in its water are blind and deformed, and only fools and shadowbinders dare eat their flesh.[7] 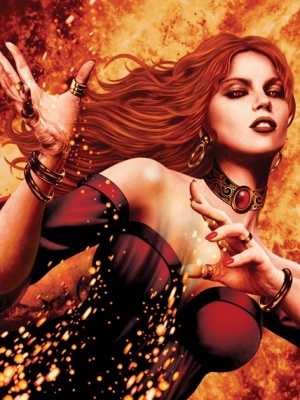 Melisandre is from Asshai - © 2012 John Picacio

Asshai and its few people have an ominous reputation in other lands. Asshai'i are described as having a dark and solemn appearance.[12] The Dothraki believe that Asshai'i are "spawn of shadows" and hold them in contempt and fear.[6]

There are no children in Asshai. All who dwell there wear masks or veils, and often walk alone or ride in palanquins of ebony and iron, hidden behind dark curtains and carried upon the backs of slaves. Only the shadowbinders of Asshai dare to travel upriver, and even they fear to tread before the doors of the Stygai, the corpse city.[7]

The Asshai'i are well versed in witchcraft and wizardry, and have a language of their own, used in their spells. Mirri Maz Duur, who studied in Asshai, sings in a foreign tongue, her voice described as "shrill" and "ululating".[2] Furthermore, Melisandre has been noted to pray to R'hllor "once in the speech of Asshai, once in High Valyrian, and once in the Common Tongue," as well as sing in the tongue of Asshai.[13]

Asshai holds a significant amount of arcane knowledge. Of any current location, it is the most likely to have dragonlore.[14] Ancient books of Asshai also record the Azor Ahai prophecy followed by members of the R'hllor faith.[15]

It is rumored that spellsingers, aeromancers, and warlocks practice their arts openly in Asshai.[16] Asshai is open to all sorts of practitioners of the "higher mysteries" such as godswives, night-walkers, pyromancers, bloodmages, as well as inquisitors, torturers and poisoners, and even worshippers of the Black Goat and Bakkalon and the Lion of Night. No practice is forbidden in the city, however depraved.[7]

The origins of Asshai are lost in history. Even the Asshai'i do not claim to know who built it, stating only a city stood there since the world began and will stand there until it ends.[7] Maesters find it difficult to discern the truth about legendary Asshai.[17]

Texts from Asshai speak of the Dawn Age.[18] Annals from the city tell of Azor Ahai during the Long Night,[19] and ancient books claim he will come again.[15] Texts also claim that dragons first appeared in the Shadow.[17]

Asshai has been a thriving port for centuries.[7] Before the Century of Blood, merchants from the Kingdom of Sarnor traded at Asshai.[20]

Jar Han, one of the sea-green god-emperors of Yi Ti, extracted tribute from Asshai during his reign.[21]

Mirri Maz Duur studied in Asshai, learning from a moonsinger of the Jogos Nhai, a Dothraki woman, Maester Marwyn,[23] and a bloodmage from the Shadow Lands.[24]

When a wrecked trading cog washed up on the Frozen Shore, a woman of the free folk found scarlet silk from Asshai in the wreckage. Her granddaughter later used the silk to mend the cloak of Mance Rayder.[25]

Daenerys Targaryen is gifted three dragon eggs by Illyrio Mopatis, reportedly from the Shadow Lands beyond Asshai.[26] In the Eastern Market of Vaes Dothrak, Daenerys spies dark and solemn Asshai'i people, as well as Shadow Men.[12] Mirri Maz Duur tells Daenerys she once studied in Asshai, and there met a maester, Marwyn.[23]

Once Ser Jorah Mormont realizes that Khal Drogo is going to die he suggests to Daenerys that they leave the Dothraki sea for Asshai, where they can find a ship to take them back to Pentos.[24] Before Drogo's body is burnt on his pyre Jorah begs Daenerys to come east with him. When Daenerys commands her handmaids to bring her dragon eggs to place on Drogo's funeral pyre, Jorah tells her that it would be better to sell them in Asshai. However, in the pyre, the eggs hatch into dragons, and Daenerys then walks into the pyre, but both remain unscathed.[2]

Bran Stark has a vision of many lands, including Asshai, where he sees dragons stirring.[27]

During Lord Tywin Lannister's council meeting, talk eventually turns to Stannis Baratheon. Among other reports he has received from Varys of Stannis's activities on Dragonstone, Tywin mentions that Stannis is bringing a shadowbinder from Asshai.[28]

Melisandre of Asshai is on Dragonstone to serve Stannis. She has converted Stannis's wife, Selyse Florent, to the faith of R'hllor.[29]

Quaithe of the Shadow is one of the three representatives from Qarth who return to Vaes Tolorro with Jhogo in search of dragons. Later in Qarth, trader captains bring Daenerys amber and dragonglass from Asshai. Quaithe urges Daenerys to leave the city as soon as possible and to "pass beneath the shadow".[6]

Dontos Hollard gifts Sansa Stark with a hairnet of black amethysts from Asshai.[30]

Silence, the ship of Euron Greyjoy, is said to be infamous from Asshai to Ibben.[31]

Mance Rayder tells Jon Snow of his black cloak that had been repaired with scarlet silk from Asshai.[25]

Quaithe reappears to Daenerys, and again tells her that to touch the light she must pass beneath the shadow.[32]

At Seagard the captain of the Myraham tells Robb Stark, King in the North, that he has heard that Euron Greyjoy has been to Asshai and back.[33]

The amethysts in Sansa's hairnet are revealed to be the strangler, and the poison is used to assassinate King Joffrey I Baratheon at his royal wedding.[34][35]

Sailors at Oldtown tell conflicting stories of dragons being seen in Essos, including Asshai.[36]

Euron Greyjoy boasts of his travels to Asshai during the kingsmoot.[37]

In Illyrio's manse in Pentos, Tyrion Lannister finds wines from Asshai in his stock.[3] Illyrio later assures Tyrion that the ship that delivered him to Pentos is on her way to Asshai. It will be two years before she returns, if the seas are kind.[38]

Prince Quentyn Martell notes that there are masked shadowbinders from Asshai at the Merchant's House in Volantis.[39]

In Meereen, Xaro Xhoan Daxos informs Daenerys that when she smashed the slave trade, the blow was felt from Westeros to Asshai.[40] Quaithe appears to Daenerys twice, once in a dream, and again reminds her she must pass beneath the shadow.[41][42]

At the Wall, Melisandre notes that she is stronger there than even in Asshai.[43]

Daenerys: Go? Where should we go?
Jorah: Asshai, I would say. It lies far to the south, at the end of the known world, yet men say it is a great port.[24]

There is a spell. But it is hard, lady, and dark. Some would say that death is cleaner. I learned the way in Asshai, and paid dear for the lesson.[24]

You need not join the dosh khaleen. Come east with me. Yi Ti, Qarth, the Jade Sea, Asshai by the Shadow. We will see all the wonders yet unseen, and drink what wines the gods see fit to serve us.[2]

To go north, you must journey south, to reach the west you must go east. To go forward you must go back, and to touch the light you must pass beneath the shadow.[6]

Daenerys: What is there in Asshai that I will not find in Qarth?
Quaithe: Truth.[6]

Godless? Why, Aeron, I am the godliest man ever to raise sail! You serve one god, Damphair, but I have served ten thousand. From Ib to Asshai, when men see my sails, they pray.[44]

Euron: Only one living kraken has never known defeat. Only one has never bent his knee. Only one has sailed to Asshai by the Shadow, and seen wonders and terrors beyond imagining ...
Qarl: If you liked the Shadow so well, go back there.[37]

—Euron Greyjoy and Qarl the Maid

Crow's Eye, did you leave your wits at Asshai?[37]

The dark city by the Shadow is a city steeped in sorcery. Warlocks, wizards, alchemists, moonsingers, red priests, black alchemists, necromancers, aeromancers, pyromancers, bloodmages, torturers, inquisitors, poisoners, godswives, night-walkers, shapechangers, worshippers of the Black Goat and the Pale Child and the Lion of Night, all find welcome in Asshai-by-the-Shadow, where nothing is forbidden. Here they are free to practice their spells without restraint or censure, conduct their obscene rites, and fornicate with demons if that is their desire.[7]

—Maester Yandel in The World of Ice & Fire