Azor Ahai was a legendary hero who wielded a burning sword called Lightbringer,[1] according to tales from Asshai and followers of R'hllor. In some other cultures this warrior is called Hyrkoon the Hero, Yin Tar, Neferion, and Eldric Shadowchaser.[3]

Melisandre has mentioned the prince that was promised[5] and Azor Ahai interchangeably, although she tends to use the name Azor Ahai far more often. It is unknown if Azor Ahai is connected with the Westerosi legend of the last hero, who lived during the Long Night and helped to defeat the Others.

Hyrkoon the Hero with Lightbringer, by Jordi Gonzalez Escamilla

According to legends from the Further East, the Blood Betrayal of the Bloodstone Emperor began an age of darkness—which Westerosi call the Long Night[3]—in ancient times when the Old Empire of Ghis was still forming.[6] A great warrior rose to fight this darkness lying over the world, according to a legend which spread from Asshai. Followers of R'hllor say the hero's name was Azor Ahai,[6] while other cultures call him Hyrkoon the Hero, Yin Tar, Neferion, and Eldric Shadowchaser.[3] Tales from Yi Ti speak of a heroic woman with a monkey's tail,[6] and legends from the north regale about a last hero who gained the aid of the children of the forest.[7][6]

Azor Ahai needed to forge a hero's sword, so he labored for thirty days and thirty nights at the sacred fires of a temple until it was done. However, when he went to temper it in water, the sword broke. He was not one to give up easily, so he started over. Azor Ahai took fifty days and fifty nights to make another sword better than the first. To temper it this time, he captured a lion and drove the sword into its heart, but once more the steel shattered. The third time, with a heavy heart, for he knew beforehand what he must do to finish the blade, Azor Ahai worked for a hundred days and nights until it was finished. This time, he called for his wife, Nissa Nissa, and asked her to bare her breast. He drove his sword into her living heart, her soul combining with the steel of the sword, creating Lightbringer, the Red Sword of Heroes.[1] Lightbringer was henceforth always warm to the touch.[8]

Although he had Lightbringer, Azor Ahai did not fight alone,[9] instead leading virtuous men into battle so that the darkness could be routed.[3] The Jade Compendium mentions that when the hero thrust the blade through a monster, the creature burst into flame.[8]

According to prophecy, in ancient books of Asshai[1] from over five thousand years ago, Azor Ahai is to be reborn again as a champion sent by R'hllor.[8] This will occur after a long summer when an evil, cold darkness descends upon the world.[1] It is said that wielding Lightbringer once again, Azor Ahai will stand against the darkness[1] and if he fails, the world fails with him.[10]

When Prince Rhaegar Targaryen was young, he and Maester Aemon believed that Rhaegar was the prince that was promised.[11][4] When he was older, Rhaegar came to believe that his infant son, Prince Aegon, fit the prophecy, since a comet was seen above King's Landing when the boy was born.[11] 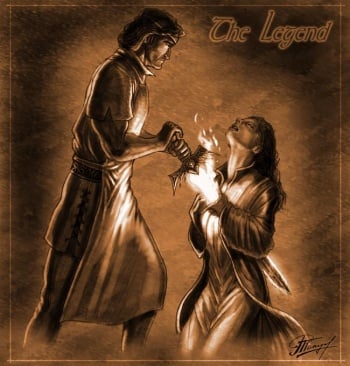 While burning statues of the Seven at Dragonstone, Melisandre, a red priestess from Asshai, proclaims that Stannis Baratheon is Azor Ahai come again. She also declares that Stannis's sword is Lightbringer. Afterward, Salladhor Saan tells Davos Seaworth about the legends of Azor Ahai and the hero's burning sword, but the sellsail doubts the authenticity of Stannis's blade.[1]

Melisandre continues to claim that Stannis is Azor Ahai reborn, the warrior of fire whose return was heralded by the red comet.[2] She tells Davos Seaworth that Stannis will wake dragons out of stone.[12]

The dying Maester Aemon now believes that Daenerys Targaryen fits the prophecy because she was born at Dragonstone amid salt and smoke, and she possesses three dragons.[11]

Jon Snow, Lord Commander of the Night's Watch, tells Clydas that he read the legend of Azor Ahai in the book Maester Aemon left him, the Jade Compendium.[8]

Benerro of Volantis proclaims that Daenerys is Azor Ahai returned.[13]

There will come a day after a long summer when the stars bleed and the cold breath of darkness falls heavy on the world. In this dread hour a warrior shall draw from the fire a burning sword. And that sword shall be Lightbringer, the Red Sword of Heroes, and he who clasps it shall be Azor Ahai come again, and the darkness shall flee before him. Azor Ahai, beloved of R'hllor! The Warrior of Light, the Son of Fire! Come forth, your sword awaits you! Come forth and take it into your hand![1]

Nissa Nissa, bare your breast, and know that I love you best of all that is in this world.[1]

—Azor Ahai to Nissa Nissa (according to Salladhor Saan)

Haldon: The dragons have come to carry her to glory.


Haldon: Benerro has sent forth the word from Volantis. Her coming is the fulfillment of an ancient prophecy. From smoke and salt was she born to make the world anew. She is Azor Ahai returned ... and her triumph over darkness will bring a summer that will never end ... death itself will bend its knee, and all those who die fighting in her cause shall be reborn ...[13]
—Haldon and Tyrion Lannister

I pray for a glimpse of Azor Ahai, and R'hllor shows me only Snow.[14]

When the red star bleeds and the darkness gathers, Azor Ahai shall be born again amidst smoke and salt to wake dragons out of stone.[15]