From A Wiki of Ice and Fire
(Redirected from Battle of Deepwood Motte)
Jump to: navigation, search

Galbart Glover, Master of Deepwood Motte, and his brother, Robett Glover, march south with Robb Stark after the arrest of his father, Lord Eddard Stark.[5] After Eddard's execution, Robb is proclaimed King in the North at Riverrun.[6]

Seeking allies, Robb sends his friend, Theon Greyjoy, as an envoy to his father, Balon Greyjoy, Lord of the Iron Islands. Balon rejects Robb's offer, however, and instead intends to strike at the north, which is weakly defended with northmen away fighting in the riverlands and the westerlands. Balon sends his son Theon, his brother Aeron Damphair, and Dagmer Cleftjaw to harry the Stony Shore in hopes that the remaining northern lords will march away from their castles. Balon sends his daughter Asha to seize Deepwood Motte, and he sends his brother Victarion with the majority of the Iron Fleet to seize Moat Cailin, thereby preventing the northern lords in the south from returning to their seats.[4]

Asha Greyjoy takes thirty longships of picked men and sails north around Sea Dragon Point. She lands on the tidal flats to the north of Deepwood and seizes the castle after a month long siege with a thousand ironborn.[4][1] Deepwood's steward loses a leg during the fighting.[7]

Asha takes hostage Robett's family, including Lady Sybelle Glover and her children, Gawen and Erena, as well Larence Snow, the Bastard of Hornwood.[8] 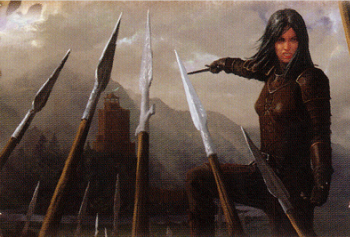 Ours for the Taking, by Igor Kieryluk © Fantasy Flight Games

Rather than follow Balon's instructions to continue raiding the Stony Shore, Theon instead seizes Winterfell in an attempt to compete with Asha. Having few men to hold the large castle, Theon has Stygg ride to Deepwood to request aid from Asha.[9] She visits Theon at Winterfell, but he refuses to give up his new seat and Asha leaves him only with ten reinforcements.[1] All ten abandon Theon when Ser Rodrik Cassel approaches the castle, and Theon is soon captured by House Bolton during the sack of Winterfell.[10]

After the Battle of the Blackwater, Lord Roose Bolton orders Robett Glover to attack Duskendale. Following the battle at Duskendale, Roose tells Robb Stark that Robett attacked out of grief and fear for the fall of Deepwood.[3]

Asha is eventually taken prisoner by King Stannis Baratheon during the fight by Deepwood Motte.[7][11]

With thirty men, I captured Winterfell in a night. You needed a thousand and a moon's turn to take Deepwood Motte.[1]

Robb: Duskendale. Robett Glover will answer for that when I see him, I promise you.
Roose: A folly, but Glover was heedless after he learned that Deepwood Motte had fallen. Grief and fear will do that to a man.[3]