Bitterbridge, formerly known as Stonebridge, is the seat of House Caswell in the Reach.

Bitterbridge is situated where the river Mander meets the Roseroad. It takes its name from an ancient stone bridge that crosses the Mander. The castle is small, made of stone and timber. The keep is not that tall, but the land is low and flat and makes it seem taller.[2]

The Hogs Head, a disreputable inn, was the first building destroyed in the sack of Bitterbridge. The town's sept was also destroyed by dragonflame.[1]

The ironborn of old raided the Mander as far as Stonebridge in their longships.[3]

A battle at Stonebridge was one of many battles during the Faith Militant uprising against King Maegor I Targaryen. The savagery of that particular battle made the Mander run red with blood for twenty leagues. The bridge and castle that commanded it was forever known as Bitterbridge thereafter.[4]

According to legend, Septon Mattheus's opulent wheelhouse passed Septon Barth, who was riding a donkey, at Bitterbridge in 50 AC.[5] King Jaehaerys I Targaryen and Queen Alysanne Targaryen landed at Bitterbridge with their dragons, Vermithor and Silverwing, during their journey to Oldtown in 54 AC.[6]

At the start of the Dance of the Dragons, the Hand of the King, Ser Otto Hightower, dispatched ravens all over Westeros to gain support for his grandson, King Aegon II Targaryen. One of these ravens was sent to Bitterbridge.[7] Tom Flowers, the Bastard of Bitterbridge, was one of the black commanders at the Battle of the Honeywine and died during the battle.[8] Later during the war, Ser Rickard Thorne of the Kingsguard and Prince Maelor Targaryen were killed by a mob in Bitterbridge while trying to make their way to the siege of Longtable. Prince Daeron Targaryen responded by burning the town with Tessarion in the sack of Bitterbridge.[1] Ulf the White was named Lord of Bitterbridge by Daeron for his service in the First Battle of Tumbleton,[1] but he was poisoned by Ser Hobert Hightower after the Second Battle of Tumbleton.[9] 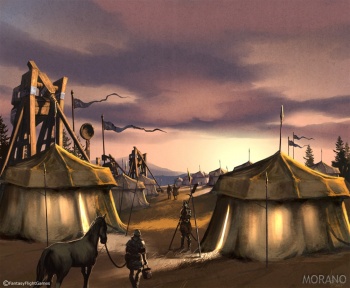 Brienne of Tarth passes Bitterbridge while traveling from Tarth to Highgarden.[11]

King Renly Baratheon's army is camped beneath the walls of Bitterbridge when Lady Catelyn Stark comes to meet with him. A great melee is hosted beneath the castle.[2] Renly takes his horse to Storm's End to deal with King Stannis Baratheon, leaving his foot behind at Bitterbridge with his bride, Margaery Tyrell.[12]

Following Renly's death, Lord Petyr Baelish hurries from King's Landing to Bitterbridge to meet with Ser Loras Tyrell,[13] continuing on to Highgarden to negotiate with Lord Mace Tyrell.[14] Lord Randyll Tarly returns to Bitterbridge, seizes Renly's stores, and puts many of the foot to death, especially those of House Florent. Lord Lorent Caswell shuts himself within the walls of his castle.[15] Riders from Bitterbridge inform Lord Tywin Lannister of the alliance between House Tyrell and House Baratheon of King's Landing.[16]

Chapters that take place in Bitterbridge