From A Wiki of Ice and Fire
Jump to: navigation, search
"Blind God" redirects here. For the northern noble, see Blind Lord.

Boash, also called the Blind God, is a deity that was once worshiped in the Valyrian Freehold. His followers settled on the main isle of Lorath.[1] 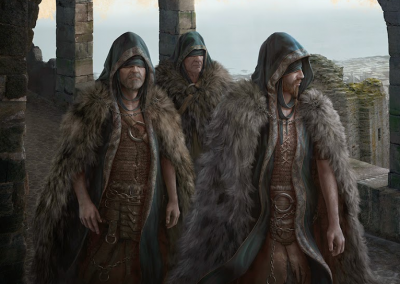 The eunuch priests of the Blind God, as depicted by Jordi Gonzales Escamilla in The World of Ice & Fire

The followers of Boash ate no flesh and drank no wine. They went about barefoot, clad only in hair shirts and hides. Their priests were eunuchs, who wore eyeless hoods in honor of their god, as they believed that only in darkness their third eye would open, allowing them to see the "higher truths" of creation that lay concealed behind the illusions of the material world.[1]

The followers of Boash held the belief that all life was sacred and eternal. They further believed that all on earth were equal creatures of god; men and women, lords and peasants, rich and poor, slave and master, and even man and beast.[1]

Part of their doctrine was the extreme abnegation of the self, for only by freeing themselves of vanity could men hope to become one with the godhood. Thus, the Boash'i put aside their own names and spoke of themselves as "a man" or "a woman", rather than say "I" or "me". This habit of speech endures in Lorath to this day, where the nobility regards it as terribly vulgar to speak of one's self directly.[1]

1322 years before the Doom of Valyria, a sect of religious dissidents left the Valyrian Freehold to establish a temple on the Lorathi main isle,[1] thereby founding Lorath as a Valyrian colony.[2] The ancient mazes of the mazemakers became the towns, temples, and tombs of the Boash'i. For three-quarters of a century, they dominated the islands of Lorath. Later, men from other lands and faiths, including escaped slaves, settled on Lorath. They were at first subservient to the followers of Boash, and so the priests continued to rule; however, over time the newcomers outnumbered the faithful. As the worship of Boash dwindled, the priests grew worldly and corrupt, forsaking their hair shirts, hoods, and piety, and growing fat and rich off the taxes they extracted from those they ruled. Finally, the lower classes rose in rebellion. The acolytes of the Blind God were slaughtered, save for a few that fled to the great temple maze on Lorassyon. There they remained for the best part of a century, before they died out.[1]