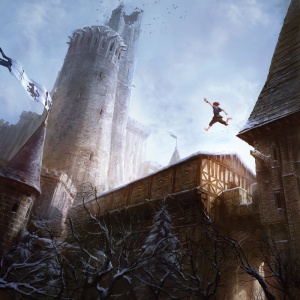 The broken tower is located near the lichyard and the First Keep.[1] Its stones are loose, as their mortar has turned to ash. The top third has collapsed inward and the lower level is full of fallen stone and ruined beams.[1] The summit is jagged.[4]

The tower was once the tallest watchtower of Winterfell, but it was ruined by a lightning strike at least a century before the birth of Eddard Stark and was not rebuilt.[1] This would place the event during the reign of Cregan Stark. Lord Eddard sometimes sends ratters into the lowest level to clear out vermin.[1] Bran Stark, Eddard's middle son, enjoys climbing from the First Keep to the broken tower so he can feed crows from the eyrie atop.[1]

Since he is supposed to leave Winterfell and accompany his father, Lord Eddard Stark, to King's Landing, Bran Stark decides to climb to the top of the broken tower one last time. While climbing the First Keep, however, he discovers Queen Cersei Lannister and Ser Jaime Lannister cavorting within. Jaime tosses Bran from a First Keep window,[1] crippling the boy.[5] It is assumed that Bran fell while climbing the broken tower, but his mother Catelyn comes to believe he was thrown.[6]

After waking from his coma, Bran resents being unable to climb the broken tower and feed crows.[7]

While much of the castle is damaged during the sack of Winterfell, the broken tower seems no worse for wear. Crows from the tower and ravens from Maester Luwin's turret feast on corpses below.[8]

Sansa Stark includes the Broken Tower when she builds a snow castle of Winterfell at the Eyrie.[2]

Theon Greyjoy observes Rickard Ryswell beneath the Burned Tower with one of Abel's washerwomen.[9] Rowan brings Theon to meet with Abel in the tower's ruins.[10]

Somewhere off in the distance, a wolf was howling. Crows circled the broken tower, waiting for corn.[1]

Once Bran had known every stone of those buildings, inside and out; he had climbed them all, scampering up walls as easily as other boys ran down stairs. Their rooftops had been his secret places, and the crows atop the broken tower his special friends.[11]

When I climbed. I went everyplace, up on the roofs and along the walls, I used to feed the crows in the Burned Tower. Mother was afraid that I would fall but I knew I never would. Only I did, and now when I sleep I fall all the time.[3]