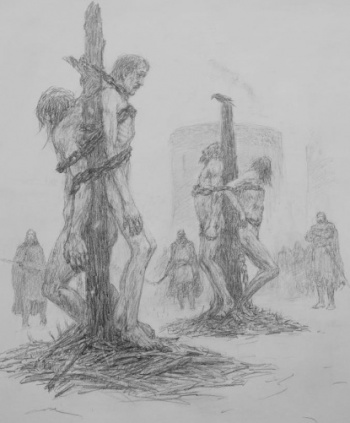 The Four Cannibals - by Marc Fishman

Cannibalism is the act or practice of humans eating the flesh or internal organs of other human beings.

According to The Edge of the World by Maester Balder, in ancient days men of Skagos sailed to the nearby island Skane, seizing all the women, killing all the men, and feasting on their flesh for a fortnight, in what was known as the Feast of Skane.[1][2]

The ice-river clans of the free folk are said to consume human flesh.[3] The rebels of Ser Raymund Mallery were allegedly eaten by wildlings after they fled beyond the Wall.[4] The last thing Varamyr Sixskins learned from Haggon was the taste of human flesh, as Varamyr, a warg, fed on Haggon as a wolf. Varamyr never ate the meat of men with human teeth.[5]

According to legend the Rat Cook served an Andal king—identified either as Tywell II, King of the Rock, or Oswell I, King of Mountain and Vale[6]—a pie that was made of bacon and, unknown to the king, the king's son. The cook killed the prince in revenge for a wrong the king supposedly did to him. The king was unaware of this, however, as he ate and praised the taste and asked for a second piece.[7]

Danelle Lothston, Lady of Harrenhal, was rumored to preside over feasts of human flesh.[8]

Some dragons are cannibals. The Cannibal was a wild dragon that lived on Dragonstone and feasted on dead or newborn dragons and their eggs.[9]

The Others are said to feed their dead servants the flesh of human children.[10]

Legends of Cannibal Bay claim some of the thousand ships entombed there are inhabited by the descendants of the original crews, who survive by feasting on the flesh of newly-trapped sailors.[11]

The Amethyst Empress's younger brother, who cast her down and slew her, was said to have practiced cannibalism.[12]

Adakhakileki in the Dothraki language means "The Cannibals".[13]

The inhabitants of the Cannibal Sands allegedly consume human flesh.[14]

The Sothoryi from regions further south in Sothoryos are more savage and are known for cannibalism; Maester Yandel considers those who eat their own dead to be ghouls.[15]

Upon returning to Lady Danelle Lothston's former home of Harrenhal, Ser Jaime Lannister recalls hearing stories about her bathing in blood and presiding over feasts of human flesh.[8]

Once in Harrenhal Shitmouth and Raff the Sweetling inform Jaime that Ser Gregor Clegane, in a mockery of Vargo Hoat's preferred way of torturing his prisoners, cut off Vargo's limbs piece by piece over an extended period of time while he had the wounds bandaged so that Vargo stayed alive. Vargo first lost his hands and feet, then his arms and legs. The extremities as well as other parts of Vargo's body were then fed as "roast goat" to northern prisoners that Gregor brought to Harrenhal, including Ser Wylis Manderly, as well as to Vargo himself.[8]

Euron Greyjoy tells his brother Victarion that he captured four warlocks in a galleas out of Qarth. One threatened the corsair so Euron killed the warlock and fed him to the other three.[16]

Thousands of survivors from the siege of Astapor flee to Meereen. Some starving refugees resort to cannibalism of the diseased.[17]

Coldhands slays deserters from the Night's Watch in the haunted forest. The ranger provides meat to Bran Stark, Hodor, and Meera and Jojen Reed, claiming to have found a sow in the wilderness.[18]

Rhaegar Frey, Jared Frey, and Symond Frey go missing after departing White Harbor.[19] During the wedding of "Arya Stark" to Ramsay Bolton at Winterfell, Lord Wyman Manderly presents three huge pork pies at the wedding feast while requesting a song from the singer Abel about the Rat Cook, implying the three Freys were actually present at the wedding after all. Wyman serves the first two portions to Roose Bolton and Walda Frey, the next to Hosteen and Aenys Frey and then eats two slices from each himself.[20]

During King Stannis Baratheon's harsh winter march on Winterfell, four House Peasebury soldiers are staked and burned by queen's men at a crofters' village for cannibalism. It is rumored that Lord Robin Peasebury may also have eaten human flesh.[21]

Aggo: Man must not eat the flesh of man.
Rakharo: It is known. They will be cursed.[17]

Better a craven than a cannibal.[21]