An unnamed catspaw[1][2] or footpad[3][4] is an assassin who tries to kill Bran Stark.[5] In the television adaptation Game of Thrones he is portrayed by Lalor Roddy.

The catspaw is described as being a small, dirty man in filthy brown clothing that smells of horses. He has a gaunt face, limp blond hair, and pale deep-sunk eyes. He wields an Valyrian steel dagger that has a dragonbone hilt. Catelyn Stark notes that he moves unexpectedly fast.[5] 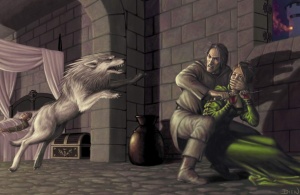 The assassin arranges for a fire to start in the library tower of Winterfell as a diversion. This succeeds in drawing Robb Stark from the comatose Bran's room in order to attend to the fire, leaving Lady Catelyn Stark behind. Upon entering the room, he finds Catelyn and claims that she was not supposed to be there. As he moves to Bran, he states that killing him would be a mercy. As she attempts to scream for help, Catelyn is attacked by the assassin, who moves to try and attempt to slit her throat. They struggle and he injures her hand, as well as pulling out some of her hair. He is about to attack again, when Summer, Bran's direwolf, attacks him and tears out his throat.[5]

Tyrion Lannister recalls a memory whilst he was at Winterfell, in which he overheard Prince Joffrey Baratheon jesting with the Hound, Sandor Clegane, to send a dog to kill a wolf. He guesses that Joffrey hired the catspaw from among those that joined the king's party as they made their way north and that he had found the dagger amongst his father's weapons and had simply taken it. However, Tyrion is unable to figure out why Joffrey wanted Bran dead, and attributes it to his innate cruelty.[6]

Ser Jaime Lannister later realizes that Joffrey sent the assassin in an attempt to impress his father, after overhearing a drunken King Robert I Baratheon say it would be kinder to put the crippled Bran out of his misery.[7]

Quotes by the catspaw

Quotes about the catspaw

Some poxy lackwit willing to risk his life for a prince's favor and a little coin.[6]