Claw Isle
The crownlands and the location of Claw Isle

Claw Isle is the island seat of House Celtigar in the crownlands. It lies a few hours sail north from Dragonstone.[1] The people of Crackclaw Point refer to the island as Crab Isle.[2]

Ancient[1] Claw Isle was settled by House Celtigar, a family of Valyrian ancestry. Prior to Aegon's Conquest, the Celtigars and the Velaryons of Driftmark controlled the middle portions of the narrow sea with their ships.[3]

Celtigars from Claw Isle attempted to conquer Crackclaw Point prior to the Conquest, and some have sent tax collectors to the mainland even after the peninsula was made part of the crownlands.[2]

Lord Edwell Celtigar resigned as Hand of the King and returned to Claw Isle in 48 AC after King Maegor I Targaryen declined to marry one of his daughters.[4] Edwell later served King Jaehaerys I Targaryen as master of coin, but he again returned to his island when the king reached his majority in 50 AC.[5]

During the Dance of the Dragons, Lord Walys Mooton's force to retake Rook's Rest from the greens included men from Claw Isle.[6] 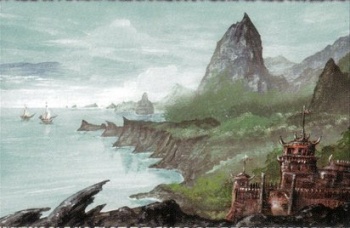 Ardrian Celtigar, Lord of Claw Isle, takes most of the able-bodied men with him when Stannis Baratheon calls his banners during the War of the Five Kings.[1] Captured in the Battle of the Blackwater, Ardrian bends the knee to King Joffrey I Baratheon.[8]

Because Lord Celtigar submitted to Joffrey, Ser Axell Florent plots with Salladhor Saan to attack Claw Isle as a reprisal, for the island is lightly garrisoned. Ser Davos Seaworth advises Stannis that it is a poor option, reminding him that Claw Isle is only held by women, children, and old men because the warriors of the island were killed fighting for Stannis on the Blackwater. Stannis decides not to attack Claw Isle. For his counsel and loyalty, Stannis names Davos Lord of the Rainwood and Hand of the King.[1]

Axell: Leave Claw Isle a desolation of ash and bone, fit only for carrion crows, so the realm might see the fate of those who bed with Lannisters.


Stannis: It could be done, I believe. The risk is small. Joffrey has no strength at sea until Lord Redwyne sets sail from the Arbor. The plunder might serve to keep that Lysene pirate Salladhor Saan loyal for a time. By itself Claw Isle is worthless, but its fall would serve notice to Lord Tywin that my cause is not yet done. Speak truly, ser. What do you make of Ser Axell's proposal?