From A Wiki of Ice and Fire
Jump to: navigation, search
For other characters with the same name, see Daemon Blackfyre.

Daemon was the first and greatest of the five Blackfyre Pretenders. As a bastard of House Targaryen Daemon bore the arms of House Targaryen with the colors reversed: a black three-headed dragon on a red field. Thus he became known as the Black Dragon.

Daemon was tall and powerful, with broad shoulders, muscular arms, and a flat stomach. Targaryen on both sides, Daemon had all the hallmarks of his house. He had strong Targaryen features, with deep purple eyes and silver-gold hair which he wore long, flowing down to his shoulders in a silvery-gold mane. He always went clean-shaven, with neither beard nor mustache. Almost inhumanly beautiful, Daemon looked every inch the warrior, and many thought that he strongly resembled portraits of Aegon the Conqueror.[4]

His armor was ornate and costly, all black and red plate, and his warhelm was distinctive, with batlike steel "dragon wings" on the sides.

Daemon matured into a man of considerable charm and strength, mastering all weapons of the battlefield, but with the sword Blackfyre in hand he was said to fight like the Warrior himself. He won friends easily and women were drawn to him.[4]

In late 170 AC[N 1] Princess Daena Targaryen gave birth to Daemon[2] in King's Landing.[3] He was named for Daena's grandfather, Prince Daemon Targaryen, "for the Prince Daemon who had been the wonder and the terror of his age".[2] Although Daena refused to name Daemon's father, many people suspected the involvement of Prince Aegon Targaryen.[2][5]

Daemon was raised in the Red Keep and was taught arms by Ser Quentyn Ball, the master-at-arms at the Red Keep.[2] In 182 AC, when he was twelve years old, Daemon participated in a squire's tourney, which he won. King Aegon IV Targaryen personally knighted Daemon and publicly bestowed the Targaryen Valyrian steel sword Blackfyre on him,[2] finally acknowledging him as his son.[4] There were some who felt that the sword symbolized the monarchy[6] as it had been the sword of King Aegon I Targaryen, the Conqueror, and had been passed on from king to king ever since. Aegon's public gift of the sword would eventually start the first talk that Daemon should be king.[7] Following the acquisition of the sword, Daemon took the name "Blackfyre" for himself.[2]

King Aegon IV negotiated a betrothal for Daemon to Rohanne of Tyrosh. Daemon's supporters would later claim that Daemon had desired to marry his younger half-sister, Daenerys, instead and that King Aegon, who desired the marriage alliance to Tyrosh, had promised Daemon that he could have more than one wife.[8] In 184 AC, while Aegon IV was on his deathbed, he legitimized all of his bastards; those born to noblewomen, including Daemon, became known as the Great Bastards.[2] At this point Daemon may have been given the title Prince since he is referred to as such by Ser Eustace Osgrey, however Ser Eustace was one of his followers so this may just be his reverence for Daemon showing instead of Daemon actually being granted the title of Prince.[1] Daemon's trueborn half-brother, Daeron II Targaryen, ascended the throne following Aegon's death. He refused to allow Daemon more than one wife, paid the dowry his late father had promised to the Archon of Tyrosh, and saw Daemon wed to Rohanne in early 184 AC, granting him a tract of land near the Blackwater on his wedding day, with the right to raise a castle.[8] Daemon and Rohanne had a fertile marriage. Their twin sons, Aegon and Aemon, were born later that same year.[9] They were followed by five more sons, and at least two daughters.[1]

Meanwhile, the growing influence of the Dornish at court, the Dornish appearance of Daeron II's heir, the sudden change of Dornish enemies to Dornish allies, Daeron's rumored illegitimacy (started by King Aegon IV during his reign), and Aegon IV's previous public gift of Blackfyre, the "sword of kings", to Daemon caused several nobles and knights to start mistrusting Daeron II and Baelor, while seeing promise in Daemon. Men began to approach Daemon, but it took them many years to convince Daemon to declare his claim. Maester Yandel considers it likely that it had been Aegor Rivers, Daemon's younger half-brother, who had managed to convince Daemon in the end.[8] According to King Maekar I Targaryen, it had been both Aegor Rivers and Ser Quentyn Ball, the master-at-arms at the Red Keep, who had played the largest role in convincing Daemon.[10] Aegor pressed him to proclaim his claim for the Iron Throne, and after Daemon agreed to a betrothal between his eldest daughter, Calla, and Aegor, his efforts increased. Many lords and knights joined in.[8] Besides the influences of his councillors, Daemon had come to resent having the status of bastard and what it represented.[11]

Following the Blackfyre defeat in the first rebellion (which included the death of Daemon himself and his eldest two children, Aegon and Aemon), Daemon's bastard half-brother, Ser Aegor Rivers, fled to Tyrosh with Daemon's remaining children and widow. From there, Daemon's descendants continued to plot. Four more rebellions would follow, until 260 AC, when Maelys I Blackfyre, the last male of House Blackfyre, was slain on the Stepstones during the War of the Ninepenny Kings.[8][1][10][12][13][14] 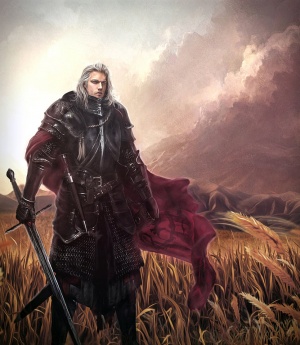 Daemon I Blackfyre, the Black Dragon, by Mike Hallstein ©

There was no final insult that resulted in the declaration of Daemon's claim.[8] There are some who say that it was the wedding of Princess Daenerys to the Dornish Prince Maron Martell that led to the First Blackfyre Rebellion. It was said that Daemon rebelled because she had been denied to him by Daeron.[15][1] However, while Daenerys' wedding took place in 187 AC, Daemon did not rebel until eight years later.[8] In 196 AC, Daemon began his rebellion, which would last nigh on a year. For his sigil, Daemon took the Targaryen sigil with the colors reversed, a black dragon on red, giving him the nickname "the Black Dragon" (with Daeron being referred as the Red Dragon).[8][1][10]

Daemon's decision to claim the throne had been made rashly, and word soon reached Daeron's court that Daemon meant to declare within a month. It has been suggested by Archmaester Merion that Brynden Rivers, another one of Aegon IV's bastard sons, was involved in the news reaching Daeron.[8] The Kingsguard was sent to arrest Daemon, but, with the aid of the master-at-arms of the Red Keep, Daemon managed to escape imprisonment.[8][10] Daemon's allies used this attempted arrest as a cause for war, claiming that Daeron had acted without reason.[8]

Besides Aegor Rivers and Quentyn Ball, Daemon's supporters, according to Ser Eustace Osgrey of Standfast, included Robb Reyne, Gareth the Grey, Ser Aubrey Ambrose, Lord Gormon Peake, Black Byren Flowers, and Redtusk. Daemon's rebellion divided the Seven Kingdoms. Half the realm declared for him, though not all were eager to pledge their full support. Notably, Houses Hightower, Butterwell, Oakheart and Tarbeck gave support to both Daemon and Daeron, while others (e.g., Manfred Lothston) were willing to betray Daemon for Daeron. The thief Quickfinger attempted to steal dragon eggs for Daemon, but was caught.[1]

Daemon's rebellion ended on the Redgrass Field in late 196 AC.[8] According to Ser Eustace Osgrey, who fought on Daemon's side, Daemon fought "like the Warrior himself".[1] Daemon shattered the lines of Lord Donnel Arryn's vanguard, leaving the loyalists in peril until Ser Gwayne Corbray of the Kingsguard arrived with reinforcements.[16] Daemon and Ser Gwayne duelled, with both men using their Valyrian steel swords. The duel is said to have lasted nearly an hour before Daemon gained the upper hand. Corbray was wounded and Daemon dismounted to prevent Corbray from being trampled. He commanded that Corbray was to be taken off the field.[1]

In the meantime, Brynden Rivers with his archers, the Raven's Teeth, had captured and assumed a position atop the Weeping Ridge, which overlooked the battlefield and allowed them to rain arrows down among Daemon and his commanders. Daemon's heir Aegon died first, followed by Daemon himself. When Daemon’s second son, Aegon's twin brother Aemon took up Blackfyre, he was slain as well.[1][8]

With Daemon dead, the rebels began to rout. Aegor Rivers claimed Blackfyre and rallied the rebels by leading a charge against the Raven's Teeth, but was eventually forced to flee.[1][8] He took Daemon's widow and remaining children with him to the Free Cities, eventually ending up in Tyrosh.[10][1] In exile, Daemon's descendants continued their struggle for the Iron Throne, resulting in four more rebellions (Second, Third and Fourth Blackfyre Rebellion, and the War of the Ninepenny Kings), as well as one peacefull attempt during the Great Council of 233 AC. These attempts led to the arrest of Daemon's third son (Daemon), and the deaths of his fourth and fifth sons (Haegon and Aenys), as well as the death of a grandson, also named Daemon. Daemon's last male descendant, Maelys, was slain during the War of the Ninepenny Kings by Ser Barristan Selmy, ending the Blackfyre threat[10][12][13][14][17] after sixty-four years.

Sixteen years after Daemon's death, some still made pilgrimages to the Redgrass Field to plant flowers on the spot where he died.[10]

The first and greatest of the Blackfyre Pretenders was the natural son of Daena Targaryen, sister, betrothed, and (briefly) wife to King Baelor the Blessed.[18]

Daemon was the name Daena gave to this child, for Prince Daemon had been the wonder and terror of his age, and in later days that was seen as a warning of what the boy would become.[2]

The rightful king, Daemon Blackfyre. The King Who Bore the Sword.[1]

—Eustace Osgrey, to Duncan the Tall

With ax or lance or flail, he was as good as any knight I ever saw, but with the sword he was the Warrior himself. When Prince Daemon had Blackfyre in hand, there was not a man equal him ... not Ulrick Dayne with Dawn, no, nor even the Dragonknight with Dark Sister.[1]

—Eustace Osgrey, to Duncan the Tall

Traitors have always paid with their lives.[19]

Daemon Blackfyre loved the first Daenerys, and rose in rebellion when denied her.[15]

Daemon Blackfyre was a rebel and usurper.[20]