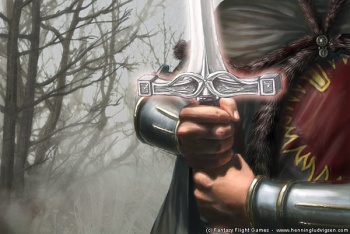 Dawn is the famous ancestral greatsword of House Dayne, whose wielder is given the title Sword of the Morning.[1]

According to legend, the founder of House Dayne tracked a falling star to the mouth of the Torentine, and Starfall was then constructed where a magical stone was discovered.[2] The greatsword Dawn was forged from the heart of this fallen star[3] and has possibly been wielded by Daynes for ten thousand years.[4] The sigil of the Daynes depicts the white sword and falling star.[5]

The blade is as pale as milkglass,[1] unlike dark Valyrian steel, but is similar in strength and sharpness.[6] Unlike other houses who have ancestral swords, House Dayne does not pass its sword from lord to heir. Only a knight of House Dayne who is deemed worthy can wield Dawn, and the Sword of the Morning is envied throughout the Seven Kingdoms.[6]

The last known user of the sword was Ser Arthur Dayne, a chivalrous knight in the Kingsguard of Aerys II Targaryen.[7] The Smiling Knight of the Kingswood Brotherhood tried to claim Dawn from Arthur, but the robber knight was killed by the Sword of the Morning.[8] After Arthur died in combat at the tower of joy during Robert's Rebellion, Eddard Stark rode to Starfall to deliver Dawn to Arthur's sister, Ashara Dayne.[9]

Dawn remains at Starfall, until another Sword of the Morning shall arise.[10]

Dawn may be a reference by George R. R. Martin to the Ebony Blade, a sword carved from a fallen meteor and wielded by Dane Whitman, a comic book superhero known as the Black Knight.

If George could wield a sword, he would choose Dawn.[11]