Falia Flowers is the bastard daughter of Lord Humfrey Hewett. Falia is made to be a servant in Lord Hewett's castle by her trueborn sisters and her step-mother.[3]

Falia is buxom and roughly seventeen or eighteen years old.[3] She is described as pretty.[2] 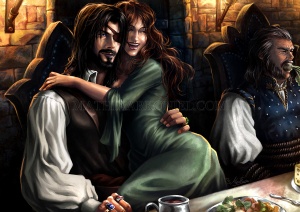 Falia in the lap of Euron Greyjoy, her father Humfrey Hewett bound besides them - by Mathia Arkoniel©

When Aeron Greyjoy is brought to Oakenshield he is fed by Falia. Aeron asks her to tell Victarion to rescue him, but she says he has already departed the island. She reveals that she is pregnant and claims Euron will make her his salt wife and her sons will be before his other bastard sons. Falia states that Daenerys Targaryen will be Euron's rock wife and that Falia will be like a sister to her. Aeron warns her to flee, saying Euron will hurt her and kill her, but Falia refuses in disbelief, stating Euron loves her and gives her silks and jewels.[2]

Later, when Aeron is lashed to the prow of the Silence, Falia is tied next to him. She is naked, pregnant, her tongue has been cut out, and her face is red from crying.[2]