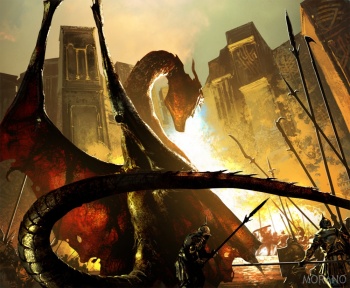 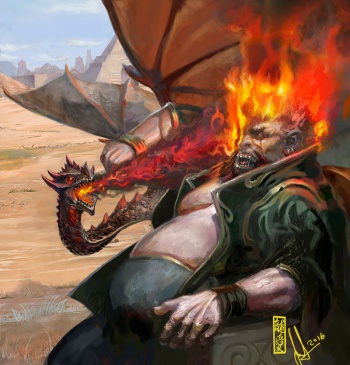 The fall of Astapor[1] takes place in the year 299 AC. Daenerys Targaryen, who has been travelling by ship, arrives at Astapor to buy an army of Unsullied. Sickened by the misery of the slave trade, she acquires from the slave masters all the Unsullied available for sale in Astapor—8,000, with another 600 guarding the city and 5,000 boys still in training—in exchange for her ships, the trading goods onboard, and a dragon, Drogon.[2]

Following a suggestion from Ser Jorah Mormont,[3] Daenerys Targaryen sails from Qarth to Astapor on Balerion to purchase Unsullied. There, Daenerys negotiates with Kraznys mo Nakloz through the translator Missandei. Daenerys understands the High Valyrian of Astapor, but keeps Kraznys ignorant of this fact, as he continually insults her. Daenerys is impressed with the martial skill of the Unsullied, but is horrified by their mistreatment.[4] She agreed to purchase all of the Unsullied soldiers in exchange for her ships, all of the trade goods she possessed, and Drogon, her largest dragon.[2]

Other than the Unsullied, Astapor is poorly defended; its walls are old and crumbling, with no guards in the towers. Even a modest Dothraki khalasar could probably take the city, but none has ever tried because of the Unsullied.[4] Apparently, no one thought it was a bad idea to turn control of all of their best soldiers to an ambitious buyer such as the desperate queen inside their walls.

The exchange takes place the next morning, at the Plaza of Punishment. Having closed the deal, Daenerys receives the harpy's fingers, a nine-lashed whip that symbolizes her ownership of the Unsullied. She betrayed the terms of the deal and unleashes her dragons on the masters and the few remaining soldiers in the plaza, ordering the Unsullied to kill the remaining slave-masters of the city and freeing all of the slaves.[2]

Before leaving for Yunkai, Daenerys leaves a council of three men—a healer, a scholar and a priest—to rule. They are later deposed by Cleon, a former butcher, who leads the people to believe that the three intend to return the Good Masters to their positions of power. Naming himself king after having the council executed, Cleon has all the highborn boys seized to begin training new Unsullied. Each pyramid within Astapor is now an armed camp and the dead lie in the streets and the markets of devoid of food and slaves to purchase.[5] The city is later besieged by the Yunkai'i.[6]