The Forest of Qohor is a large area of woodland and forest containing the Free City of Qohor in Essos. The dark, primordial forest is the greatest wood of the continent.[1]

The Forest of Qohor divides western Essos and the Dothraki sea.[2] The forest stretches north to the Shivering Sea, with the Axe to the northwest, and south to the swamps of the Selhoru. The Darkwash is to the west of the forest, while Vaes Khadokh is to the east along a Valyrian road.[3][4][3] The Free City of Qohor is located on the western edge of the forest, which also contains the headlands of the Qhoyne and the Darkwash.[3]

The vast forest can take roughly two weeks to cross by horse.[5] The forest's trees are large, with trunks as wide as city gates and leaves which give a golden hue when exposed to sunlight, making a golden canopy above travelers.[5] Pine-cones from the Forest of Qohor flow into Dagger Lake by way of the Qhoyne.[6]

Animals found within the wood include great elk, deer, spotted tigers, wolves, tree cats, monstrously huge boars, and spotted bears.[5] The wood also has a species of lemur called Little Valyrians because of their silver fur and purple eyes.[5][1] 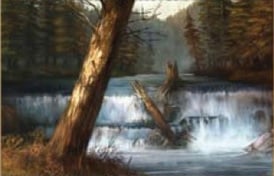 The forest provides the main source of Qohor's wealth. Silver, tin, and amber are found in the forest.[1] The Forest of Qohor is also known for its furs and pelts.[1]

According to the Citadel, the gloomy Forest of Qohor has never been fully mapped.[1] The earliest known settlement at what is now Qohor was a lumber camp.[1]

When Daenerys Targaryen is newly wedded, Khal Drogo's khalasar rides through the Forest of Qohor for half a moon. The animals all flee at the approach of the khalasar and Daenerys has no glimpse of them.[5]

The woods that surround Qohor are the principal source of the city's wealth.[1]