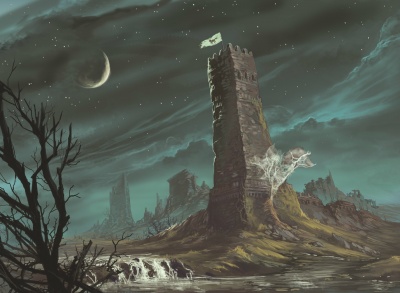 The Gatehouse Tower is one of the three remaining towers of Moat Cailin, the others being the Children's Tower and the Drunkard's Tower.

Squat and wide, the Gatehouse Tower is the largest of the remaining towers of Moat Cailin.[1] It is covered in green moss,[2] and a gnarled tree grows sideways from the stones of its north side.[1] There are fragments of broken wall still standing to the east and west.[1]

The Gatehouse Tower's hall is dark stone, drafty with high ceilings. A massive table of carved stone fills the hall, and pale lichen spot the walls. Peat can be burned in the hall's black hearth. A spiral stair leads up the tower to a dark and smoky chamber.[2][1]

Robb Stark takes the Gatehouse Tower as his seat when his northern host stays at Moat Cailin during their march south. Robb holds a war council with the northern lords in the tower's hall.[2]

During the siege of Moat Cailin, Ramsay Bolton sends Theon Greyjoy to offer the ironborn garrison of Moat Cailin food and safe passage if they surrender to House Bolton unarmed. Theon sees pale faces at the battlements of the Gatehouse Tower and through the broken masonry crowning the Children's Tower. Theon succeeds in entering the Gatehouse Tower, where he discovers forty-eight ironmen are still holding the tower. Most are men from House Codd.[1] Theon is informed by a guard that all of the ironborn within the Children's Tower are dead; Dagon Codd went over a few days ago and discovered two survivors eating the corpses of the deceased, so Dagon killed them both. Some of the pale faces may thus be those of crannogmen opposing the ironborn.[1]

Within the Gatehouse Tower's upper chamber, Theon gives the gift of mercy to its dying commander, Ralf Kenning. Theon then meets with surviving ironborn in the tower's hall. When Dagon refuses to surrender, he is killed by Adrack Humble.[1]