From A Wiki of Ice and Fire
(Redirected from Gold cloaks)
Jump to: navigation, search

There are three sets of barracks for the City Watch: the East Barracks by the Dragon Gate,[1] the West Barracks near Cobbler's Square and the Gate of the Gods,[1] and one beneath the Tower of the Hand in the Red Keep.[2][3] 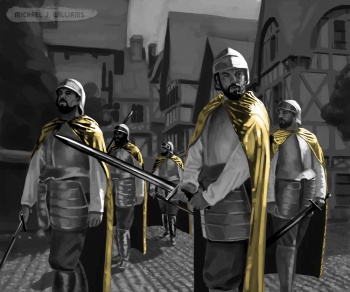 See also: Images of the City Watch of King's Landing

The City Watch wear cloaks, usually made of heavy wool, dyed gold. They are equipped with mail armor, iron cudgels, iron spears, dirks, and occasionally longswords. Their armor, boots, and gloves are black.[6] The officers (such as the captains of the gates of the city) wear black breastplates ornamented with four golden disks.[7] They can be used as guards, foot soldiers, or in some cases, as mounted lancers.[8] Nonetheless, the watchmen are not true soldiers.[9]

Daemon and the Dance of the Dragons 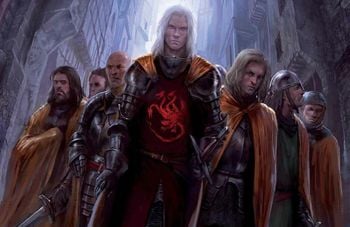 Prince Daemon Targaryen and his men on patrol, by Marc Simonetti ©

Prince Daemon Targaryen commanded the watch from 104–105 AC. He instituted their uniform use of equipment, including the golden cloaks from which they get their name. The weapons he issued were dirk, short sword, and cudgel. There were two thousand gold cloaks at the time.[14]

During the Dance of the Dragons, the officers of the City Watch were loyal to Queen Alicent Hightower and the greens, but the rank-and-file gold cloaks supported their former commander, Daemon, a leader of the blacks. Ser Luthor Largent was appointed commander at the start of the war, but Ser Otto Hightower, the Hand of the King, named his son Ser Gwayne as Luthor's second.[15] During the fall of King's Landing, Luthor led a coup in support of the blacks and personally killed Gwayne Hightower.[16]

After Luthor was killed during the riots in King's Landing, Ser Balon Byrch became the new commander.[17] The "Mudfoot" garrison, stationed at the River Gate or "Mud Gate", joined the hedge knight and would-be kingmaker Perkin the Flea, declared their allegiance to Trystane Truefyre and flew his banner above the River Gate. The garrison stationed at the Gate of the Gods was overwhelmed by Perkin's men.[17] Twenty gold cloaks accompanied Queen Rhaenyra Targaryen when she fled the capital, but half of them deserted her on the Rosby road and the remainder stayed at Duskendale when she sailed for Dragonstone.[17] Perkin became commander of the City Watch after a pardon from King Aegon II.[18]

Many gold cloaks died during the Winter Fever and the Moon of Madness, so Lord Unwin Peake added five hundred of his own men to the City Watch.[19] During the Lysene Spring, George Graceford admitted that Ser Lucas Leygood, the gold cloaks' commander, and six of the seven gate captains had conspired against King Aegon III Targaryen and Prince Viserys Targaryen.[20]

The reputation of the City Watch hit an all time low during the reign of King Aegon IV Targaryen. Aegon promoted his lickspittles within the Watch and used them as go-betweens to make sure the brothels were available for his lusts. It took more than a year for Aegon's son and sucessor, Daeron II Targaryen, to repair the City Watch after Aegon's death.[21]

When the Targaryens were overthrown during Robert's Rebellion, the new king, Robert I Baratheon, continued the institution of the gold cloaks. Janos Slynt became their commander after the death of Manly Stokeworth.[22] During his rule as commander of the gold cloaks, Janos was known for taking bribes and selling positions and promotions. By the end of his tenure, over half the officers were paying him part of their salaries. Lord Jon Arryn, the Hand of the King, discovered this, and had two men who were willing to come forward to testify against Janos, but both were found dead a short time later. Robert recognized Janos's corruption, but allowed him to remain in his position, arguing his successor might be worse. The king's brother, Lord Stannis, felt Lord Petyr Baelish had convinced Robert to retain Janos.[23] 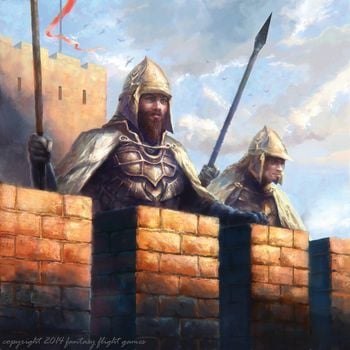 During the Hand's tourney, the gold cloaks are hard-pressed to keep the king's peace. The Hand of the King, Lord Eddard Stark, commands Lord Petyr Baelish to find funds to hire more watchmen, and lends twenty of his own Winterfell guardsmen to help for the tourney's duration.[24]

After Robert's death, Petyr tells Eddard he will make certain the gold cloaks are loyal to him in the power struggle against Queen Cersei Lannister, with a bribe of six thousand gold coins.[4] In truth, Petyr bribes Janos to support the queen, which is ultimately successful when Janos and one hundred gold cloaks accompany Eddard to the throne room and betray him, killing the Winterfell men.[25] Janos is rewarded by being named Lord of Harrenhal.[26] After being dismissed from the Kingsguard, Ser Barristan Selmy kills the gold cloaks that Janos sends to arrest him.[3][27]

King Joffrey I Baratheon considers leading the City Watch into the field against his uncle, Renly Baratheon.[28]

Five gold cloaks come upon Yoren's band of Night's Watch recruits on the kingsroad with the intent of seizing Gendry, a bastard of King Robert I Baratheon, but they are driven away.[29] On Cersei's orders, Janos sends his right hand man, Allar Deem, to murder the infant Barra, another royal bastard.[30]

Commander Slynt is exiled to the Wall by the acting Hand, Tyrion Lannister, for his corruption and next potential betrayal, and Tyrion arranges for Allar to be thrown overboard.[30] Janos's replacement is Ser Jacelyn Bywater, an honorable veteran of Greyjoy's Rebellion, who helps Tyrion prepare the city's defenses in the face of impending invasion by Stannis Baratheon.[9]

Along with forty knights and squires including Hobber Redwyne, three hundred gold cloaks escort Petyr Baelish to Bitterbridge on his mission to treat with the Tyrells.[31]

During the riot of King's Landing, Ser Jacelyn and a wedge of mounted lancers charge down the streets in an effort to defend the royal party, while numerous others form lines of spears before the smallfolk. In total, nine gold cloaks are slain and forty wounded.[8] Tyrion sends Jacelyn to take Prince Tommen Baratheon into custody at Rosby, confronting his sworn shield, Ser Boros Blount, without bloodshed, and seizing Rosby to hold him there.[32]

Towards the end of his term, Janos had tripled the number of the gold cloaks, making them six thousand strong.[8] Despite this, the new watchmen are poorly trained, and many are drunks, brutes, or cravens who joined for the promise of bread. Also, as Kingslanders, few have love for House Lannister after the Sack of King's Landing.[9] Tyrion believes that only a quarter of them (fifteen hundred) are reliable as actual soldiers.[9]

When Stannis arrives and the Battle of the Blackwater begins, the Watch constitutes the bulk of the defending force.[33] When King Joffrey withdraws from the walls, the men break. Commander Bywater attempts to rally them, but is killed by his own men on the cusp of success.[34]

After figuring casualties and desertions, the number of men available is down to forty-four hundred.[34] Command falls to Ser Addam Marbrand, Lord Tywin Lannister's daring cavalry captain. Despite problems with paying the men, Addam is forbidden by Queen Cersei from dismissing any from service.[34] Some who deserted in the Battle of the Blackwater return to the barracks, trying to take up service again, and Tywin orders Addam to break their knees.[35]

An honor guard consisting mostly of gold cloaks accompanies Tyrion Lannister when he welcomes Prince Oberyn Martell to King's Landing.[36] Gold cloaks manage the crowd of smallfolk at the wedding of King Joffrey to Margaery Tyrell at the Great Sept of Baelor.[37]

When being brought to his trial for the death of Joffrey, Tyrion is escorted by Addam and six watchmen rather than the Kingsguard, most of whom had testified against him. A hundred gold cloaks stand guard in the throne room.[38][39]

Ser Addam is relieved to leave his troubling duties to join Ser Jaime Lannister in a mopping-up campaign in the riverlands.[40] In his place Cersei appoints the illiterate hedge knight Osfryd Kettleblack,[41] who is later removed by the small council after Cersei's arrest by the Faith of the Seven. In his place, they promote Humfrey Waters to lead the gold cloaks.[42]

The new Hand of the King, Lord Mace Tyrell, adds a hundred Highgarden men to the City Watch.[43]

Known Commanders of the City Watch

Known members of the City Watch 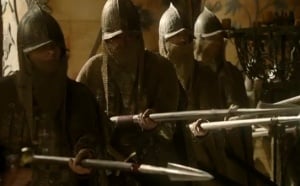 Gold cloaks in Game of Thrones

Daemon gave us these cloaks, and they're gold no matter how you turn them.[16]

For the sake of the love I bear for Catelyn, I will go to Janos Slynt this very hour and make certain that the City Watch is yours. Six thousand gold pieces should do it. A third for the Commander, a third for the officers, a third for the men. We might be able to buy them for half that much, but I prefer not to take chances.[4]

It takes more than a gold cloak to make a watchman.[8]