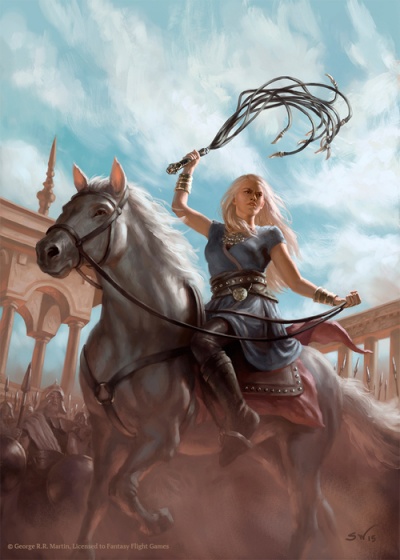 Daenerys Targaryen raises the harpy's fingers above her © FFG 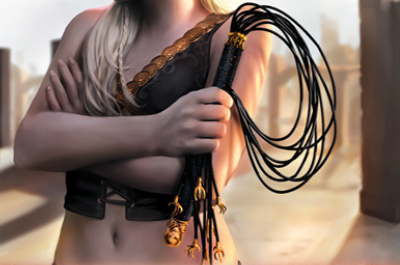 The harpy's fingers is the name of a whip used to scourge slaves in Astapor.

The handle is made of black dragonbone elaborately carved and inlaid with gold. Nine long leather lashes trail from it, each tipped by a gilded claw. The gold pommel is a woman's head with pointed ivory teeth. The whip is given to new masters of Unsullied as a mark of payment.[1]

In Astapor, as Daenerys Targaryen purchases her Unsullied, she gives the Good Masters her dragon Drogon in payment. When Daenerys hands the end of Drogon's chain to Kraznys mo Nakloz, she is presented with the harpy's fingers in return.

Daenerys mounts her silver and raises the harpy's fingers above her head for all the Unsullied to see, proclaiming that they are hers. She then rides up to the slavers and sweeps the harpy's fingers down as hard as she can across Kraznys's face, tearing his features half to pieces. She then tells Drogon, "Dracarys." When her dragon takes to the air and sets Kraznys afire, the Sack of Astapor begins.

The Good Masters command the Unsullied to stop the attack and defend the Masters, but the men do not move. Daenerys commands the Unsullied to slay the Masters and free the slaves. She raises the harpy's fingers in the air, and then flings it away, calling out "Freedom!" and "Dracarys!"[1]

Dany turned the whip in her hand. Such a light thing, to bear such weight.[1]

—Daenerys Targaryen's thoughts on the whip