House Baratheon of Storm's End is one of the Great Houses of Westeros, and is the principal house in the stormlands, which they rule as Lords Paramount of the Stormlands. Their seat, Storm's End, is an ancient castle raised by the Storm Kings from the now-extinct House Durrandon. The Baratheon sigil is a crowned black stag on a field of gold.[1] Members of the family tend to be tall and powerfully built, with black hair and blue eyes, as well as strong, square jawlines. They are known for their mercurial tempers, and their words are "Ours is the Fury". 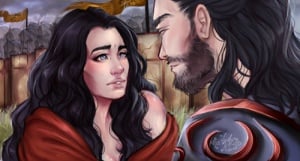 House Baratheon is the youngest of the Great Houses of Westeros. It was created when Orys Baratheon, one of Aegon I Targaryen's generals, his closest companion, and his rumored bastard half-brother, took Argella Durrandon, the only daughter of Argilac Durrandon, the last Storm King, to wife. Orys took the sigil and words of House Durrandon for his own and became the first Lord of Storm's End.[2][3] Through the female line, House Baratheon descents from King Durran Godsgrief, who founded the kingdom of the Storm Kings during the Age of Heroes.[4]

Ser Raymont Baratheon, a younger son of Lord Orys Baratheon, was a member of the Kingsguard of King Aenys I Targaryen, and saved the life of his king during the Faith Militant uprising, when the Poor Fellows attempted to murder the king in his bed.[5]

During the Dance of the Dragons, Lord Borros Baratheon sided the House with Aegon II Targaryen and the greens, despite his late father, Lord Boremund's support of the blacks and relation to Rhaenys Targaryen (through his sister, Jocelyn Baratheon).[6][7][5] Prince Aemond Targaryen was sent to Storm's End, to get Lord Borros to side with Aegon II, by offering a betrothal between himself and one of Lord Borros' four daughters. It is unknown whether this marriage occurred prior to Aemond's death the next year. Lord Borros was reluctant to face the dragons during the war, but marched with his army towards the end of the war, seizing King's Landing for Aegon II during the Moon of the Three Kings, restoring the city to order. He was promised that his eldest daughter would marry King Aegon II, who had lost both his Queen, Helaena Targaryen, as well as both of his sons, during the war. Borros then marched against the approaching riverlander army, and fought in the Battle of the Kingsroad, where he was killed by young Lord Kermit Tully.[5][8][9]

Having been injured in Dorne, King Baelor I Targaryen stayed at Storm's End for more than half a year to regain his strength, before traveling on to King's Landing.[10]

In 200 AC, Lord Baratheon held a tourney to celebrate the birth of his grandson. In 209 AC, the heir to Storm's End, Ser Lyonel Baratheon, called the Laughing Storm, participated in the Ashford tourney and fought on the side of Ser Duncan the Tall during a trial of seven.[11]

A daughter of Lord Lyonel was betrothed to crown prince Duncan Targaryen in 237 AC. Duncan broke the betrothal when he married Jenny of Oldstones in 239 AC. This angered Lord Lyonel, causing him to declare independence, naming himself the new Storm King. His short, bloody rebellion ended when he was defeated by Ser Duncan the Tall in single combat, Duncan renounced his claim to the throne, and King Aegon promised that Princess Rhaelle Targaryen, his youngest daughter, would marry Lyonel's heir, Ormund Baratheon. Rhaelle was send to Storm's End to serve as cupbearer to Lord Lyonel, and as lady companion to Lord Lyonel's wife. The wedding took place in 245 AC, and a son, Steffon, was born the next year.[12][5]

Steffon served in his youth at the court of King's Landing, and became a close friend to his cousin, Prince Aerys Targaryen. He fought in the War of the Ninepenny Kings in 260 AC, where his father, Lord Ormund, died in his arms, slain by Maelys I Blackfyre.[13][5]

Lord Steffon's eldest son, Robert, was fostered by Lord Jon Arryn at the Eyrie, together with Eddard Stark from Winterfell.[14] Prince Rhaegar Targaryen defeated Lord Steffon Baratheon in a tourney at Storm's End that was eventually won by Ser Barristan Selmy.[15] After the Defiance of Duskendale, King Aerys II Targaryen summoned Lord Steffon to King's Landing and named him to the small council. In 278 AC, Steffon was sent to Volantis, to find a bride for Prince Rhaegar Targaryen. He was accompanied by his wife, Lady Cassana Estermont. They failed their mission, and died upon their return, when their ship Windproud sank in Shipbreaker Bay.[16][5][17] Steffon's eldest son, Robert, inherited Storm's End upon Steffon's death, and in the years that followed, was betrothed to Lyanna Stark of Winterfell.[18][19] In 282 AC, Prince Rhaegar Targaryen, Robert's cousin, disappeared with Lyanna Stark, causing Lyanna's eldest brother Brandon to ride to King's Landing in anger. He was arrested, and killed together with his father, Lord Rickard Stark, on the command of King Aerys II. The king then demanded the heads of both Lord Robert, as well as Eddard Stark, from Lord Jon Arryn, as both men were in the Vale. Jon refused and raised his banners, marking the start of the war that would become known as Robert's Rebellion. Robert became a figure-head, and he personally killed Prince Rhaegar Targaryen during the Battle of the Trident in 283 AC. In the early parts of the war, the battles at Summerhall and the siege of Storm's End were fixtures of the stormlands theater.[20][5][1] 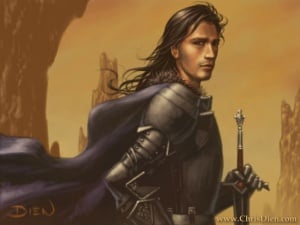 Lord Jon Arryn, the Hand of the King, dies suddenly in King's Landing. King Robert I Baratheon and his retinue travel to Winterfell to offer the position to Lord Eddard Stark, Robert's friend from his youth. Lord Renly Baratheon rides north to meet King Robert on his return trip after Eddard accepts the position, while Lord Stannis Baratheon returns to his seat at Dragonstone. Renly participates in the Hand's tourney, riding well before losing to Sandor Clegane.

Later, as Robert lies dying from a kingswood boar's tusk, Renly asks Eddard to support him in a bid for the throne. Lord Stark has discovered that Queen Cersei's children, Joffrey, Myrcella, and Tommen Baratheon, are not Robert's legitimate children, but they are instead bastards born of incest with Cersei's brother, Ser Jaime Lannister. Eddard insists that it is Lord Stannis who should be Robert's successor as king. After Eddard refuses to support Renly's bid for power, Renly, his thirty men-at-arms, and his former squire Ser Loras Tyrell ride south out of the capital. King Joffrey I names Lord Renly and Ser Loras among the nobles who must do him homage or be declared traitors, and soon thereafter has Eddard executed for treason.

Despite Stannis's better claim to the Iron Throne, Renly is able to rally the stormlands to his cause, as well as House Tyrell and much of the Reach. Stannis has a significantly smaller force drawn mostly from the crownlands and the royal fleet. When Renly is assassinated beneath the walls of Storm's End as the brothers' hosts prepare to clash during the War of the Five Kings, he leaves no heirs. Most of the houses sworn to Storm's End, as well as some from the Reach, join Stannis, who unsuccessfully attacks King's Landing in the Battle of the Blackwater. Following their defeat, most houses sworn to Stannis kneel to King Joffrey and the Iron Throne. 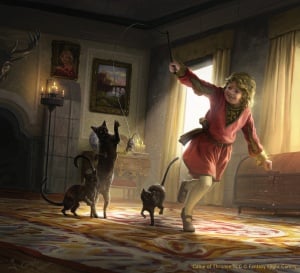 Stannis's garrison at Storm's End commanded by Ser Gilbert Farring remains loyal to his cause.

Edric Storm is smuggled out of Dragonstone by Lord Davos Seaworth to prevent him from being burned alive by Stannis's advisor, Melisandre.

Renly's widow, Margaery Tyrell, marries King Joffrey Baratheon. After Joffrey's death, the current head of the house is the young king Tommen I Baratheon - a title disputed by King Stannis.

Aside from a few garrisons, Stannis leads his remaining forces north to the Wall and saves the Night's Watch from wildlings in the battle beneath the Wall.

Queen Cersei Lannister serves as regent for her son, King Tommen I. She sends Lord Mace Tyrell to take Storm's End from Stannis's garrison, although when Mace hears his daughter Margaery has been arrested he returns to the capital with most of his army,[21] leaving Lord Mathis Rowan to continue the siege with a token force.[22] Cersei is replaced as Tommen's regent by Ser Kevan Lannister[23] after she is also arrested by the Faith of the Seven. Ser Loras Tyrell is said to have taken Dragonstone from Stannis's garrison in a bloody assault.

The garrison at Storm's End is Stannis's last force in the south, but it is threatened by Mathis Rowan as well as Aegon Targaryen and the Golden Company.[28][22][29]

The regent of King Tommen I Baratheon, Ser Kevan Lannister, is murdered in King's Landing by Varys.[23]

House Baratheon at the end of the third century 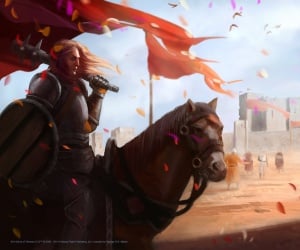 The known Baratheons during the timespan of the events described in A Song of Ice and Fire are:

With unknown exact relations to the main branch:

During the reign of Aegon IV Targaryen, the relationship of Ser Terrence Toyne of the Kingsguard with Bethany Bracken, the king's own mistress, led to the downfall of House Toyne,[40] who had been sworn to Storm's End. The outlaw Simon Toyne was killed in 281 AC.[41] Another member of House Toyne, Myles Toyne, is known to have lived in exile in Essos.[42]

Following the Battle of the Blackwater, Nightsong is taken from House Caron and granted to the newly-created House Foote of Nightsong.

They are quite a pair, Stannis and Renly. The iron gauntlet and the silk glove.[43]