House of Black and White 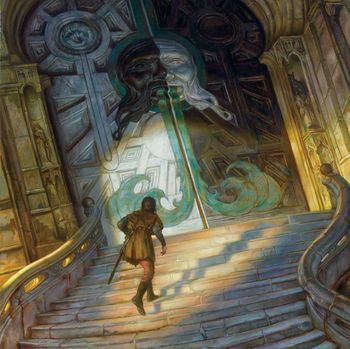 The House of Black and White is the temple of the Many-Faced God and the headquarters of the Faceless Men. It is located in Braavos near the Holy Refuge.[1][2]

The House of Black and White sits upon a rocky knoll made of dark grey stone. It has no windows and has a black tile roof. Its wooden doors are twelve feet high and carved. The left door is weirwood, the right ebony. In the center of the doors is a carved moon face ebony on weirwood, weirwood on ebony. Its steep steps of grey stone lead down to the shadowed dock.[1] Besides the front door, there are also secret tunnels and hidden passages which allow entry to the temple.[3] A winding stair leads to the garret, and a steep wooden ladder reaches the rooftop's door and a windy perch.[3]

The temple proper has rows of long stone benches and a rough stone floor, and hard stone beds are located in shuttered alcoves at the walls.[1][2] In the center is a black pool of poisoned water[2] ten feet across and lit by dim red candles.[1] Statues of gods stand around the room.[1] There are tall statues of thirty gods in all. Among them are Bakkalon,[2] the Black Goat of Qohor,[1] the Hooded Wayfarer,[2] the horse god,[1] the Lion of Night,[2] the Merling King,[2] the Moon-Pale Maiden,[2] the Stranger,[2] and the Weeping Woman.[2] There are no services or songs of worship within the temple.[2]

The knoll upon which the temple sits holds many passageways cut from the rock,[2] with a maze of vaults and tunnels located beneath the temple proper.[4] The vaults and storerooms contain armament and clothing; the possessions of people who die in the temple are separated by the servants.[2][4] The sleeping cells of priests and acolytes are located on the first level beneath the main floor. The sleeping cells for the servants are on the second.[2]

The holy sanctum lays on the third level, which is only available to priests.[2] A heavy iron door leads to steps which descend below the canal. At the bottom another iron door leads to a chamber filled with the collection of hanging faces used as disguises by the Faceless Men. One side passage is walled with bones and supported by columns of skulls, and another passage leads to steps which descend even further.[3]

The kindly man and the waif are priests who reside at the House of Black and White,[2][4] and three acolytes also live in the temple. The House of Black and White also has two older serving men and a cook, Umma.[2] The servants of the Many-Faced God pray at dawn at the pool before breakfast, and they eat at a carved wooden table.[2] Other servants who visit from time to time include a fat fellow, a man with a stern face, a handsome man, a squinter, a lordling, and a starved man.[2] The waif prepares various potions for the temple,[5] including poisons for the pool.[2] Priests can sit in tall chairs are carved of ebony or weirwood, with faces of one wood carved on the backs of the other.[3]

Worshipers who visit the temple can light candles before the statues and pray at the poisoned pool. Those who wish to die can drink the sweet dark water of the pool and then pass away in an alcove.[2] Worshipers who ask to see a priest can be escorted into the sanctum by the kindly man or the waif.[2] The serving men bring dead bodies to the vaults, where the acolytes strip and wash the bodies. The corpses of the dead are then taken to the holy sanctum.[2]

In Braavos, Yorko Terys rows Arya Stark to the House of Black and White. Its doors are closed when she arrives, but they open after she says "valar morghulis" while presenting the worn iron coin previously given to her by Jaqen H'ghar. Arya fills a cup with water from the pool and offers it to a weeping young man, and she notices that the man and other attendees are dying or already dead.[1]

The kindly man allows Arya to stay at the temple as a serving girl. She is required to discard her old personality, including her belongings, to begin the training as a novice. She does this, except for Needle, which she hides under the exterior steps. Arya helps the acolytes clean dead bodies, and the kindly man eventually sends her to live at Brusco's as "Cat of the Canals".[2] Arya returns to the temple to serve on nights when the moon is black, and the kindly man has her blinded after the death of Dareon.[5] 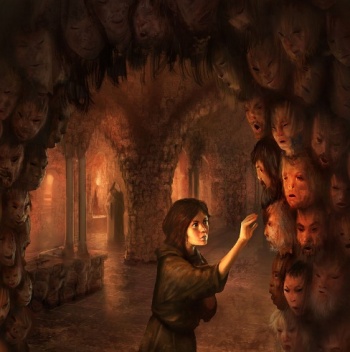 Arya Stark in the third level, by Marc Simonetti ©

Now going by the name Beth, Arya continues to serve at the temple, which she has difficulty navigating while blind. She learns poisons, potions, and languages, and she practices a lying game with the waif. Arya eventually has her sight returned.[4]

After plague face tasks Arya with killing an old man, the kindly man leads her to the holy sanctum and gives her the face of an ugly girl. Arya receives her true face again after killing the elderly man, and she is made an acolyte.[3] The kindly man gives her a new face and sends her to Izembaro.[3]

Arya: What place is this?
Kindly man: A place of peace.[1]

—Arya Stark and the kindly man

The gift of the Many-Faced God takes myriad forms, but here it is always gentle.[2]

Death holds no sweetness in this house.[3]