From A Wiki of Ice and Fire
(Redirected from Hyrkoon)
Jump to: navigation, search 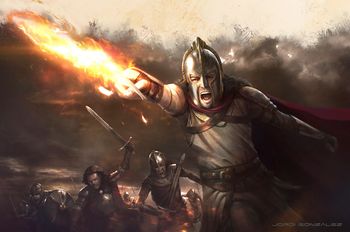 Hyrkoon the Hero, with Lightbringer in hand, leads the virtuous into battle, as depicted by Jordi Gonzales Escamilla in The World of Ice & Fire.

The Patrimony of Hyrkoon was an ancient nation that flourished to the east of the Bone Mountains in Essos. It was ruled by the Patriarchs of Hyrkoon. They founded the fortress cities of Kayakayanaya, Shamyriana and Bayasabhad.[1]

The Patrimony is presumably connected with "Hyrkoon the Hero", another name for the legendary figure most commonly known as Azor Ahai. Its leaders appear to claim descent from him.[2]

The Patrimony of Hyrkoon was centered around a fertile area of rivers and lakes, since desiccated to become the Great Sand Sea, a time known as the Dry Times. The fortified cities of Kayakayanaya, Samyriana and Bayasabhad were once part of this great nation, each guarding the Steel Road, the Stone Road, and the Sand Road, respectively, from brigands, outlaws, and wild men of the Bone Mountains, and the savages that dwelt beyond them.[1]

Before the Dry Times, the Patrimony fought a savage border war with the Jogos Nhai, who poisoned rivers and wells, burned towns and cities, and carried off thousands into slavery on the plains. The Hyrkoon, for their part, sacrificed tens of thousands of Jogos Nhai to their gods. This enmity survives into the present, with Jogos Nhai jhattars leading attacks on Kayakayanaya.[3]

The custom of having warrior women, who fight bare-breasted and pierce their nipples with iron rings and cheeks with rubies, shared by the above cities, possibly originates in the Patrimony. West of the Bone Mountains, the city of Yinishar, now the ruins of Vaes Jini, may have been connected with Hyrkoon, as the people of Yinishar were akin to the people of Shamyriana.[4]

Hyrkoon appears to take its name from the Elric saga by Michael Moorcock. The main character, Elric of Melniboné, is the ruler of his city, while his cousin and heir Yyrkoon plots against him. "Eldric Shadowchaser" is an alternate name for Azor Ahai. In "The Lion and the Rose", an episode of Game of Thrones scripted by George R. R. Martin, a wedding guest suggests the name "Stormbringer"—which is the name of Elric's sword—for Joffrey Baratheon's new sword, but the king prefers the name Widow's Wail.

The name "Hyrkoon" may also draw inspiration from the name "Hyrkania" from the story "Shadows in the Moonlight" by Robert E. Howard. In an essay in his Dreamsongs anthology Martin cites reading Howard's story as a formative experience in his (Martin's) development as a reader of fantasy. Martin quotes a passage referring to Hyrkania, "whose riders wore steel and silk and gold."[6]