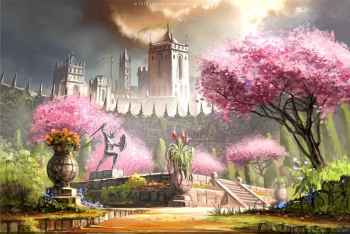 Illyrio's manse is a stronghold belonging to Magister Illyrio Mopatis within the city of Pentos. It has a view of the Bay of Pentos.[1]

The manse has brick walls twelve feet high with iron spikes atop. There are three gates, the main gatehouse being the chief way in and out of the manse. There is one in the garden that is hidden by ivy. The third gate is a postern by the kennels. The main and postern gates are guarded by some of Illyrio's eunuchs, while the garden gate is chained. The manse has pillared galleries, pointed arches, and a tiled courtyard in which mushrooms grow from cracks.[2] Illyrio decorates one of his bedchambers with soft, patterned Myrish carpets.[2]

There is a marble pool with a statue of a naked youth in its center. The statue is lithe and handsome, made of painted marble so that the hair is blond and shoulder-length. It is poised to duel with a bravo's blade in hand.[2] According to Illyrio, it was carved when he was sixteen by Pytho Malanon.[3] The pool is surrounded by six cherry trees. The gardens behind the manse are more extensive than the one by the pool.[2]

Illyrio's cellar, long and dim, has barrel-vaulted ceilings and stone walls spotted with nitre. The cellar contains casks of ale and wine, including sweet blackberry, sweet reds from the Reach, sour reds from Dorne, pale ambers from Pentos, green nectars and fire wines from Myr, and Arbor gold.[2][3] Illyrio also has wines from the Further East, including Qarth, Yi Ti, and Asshai, as well as strongwine from the private stock of Runceford Redwyne, a former Lord of the Arbor.[2]

The manse is guarded by plump Unsullied, eunuch soldiers from Astapor. Other slaves include two fat female cooks, young and old; a potboy; a freckled washerwoman; a blond girl trained in Lys; and a mousy older woman.[1][2] 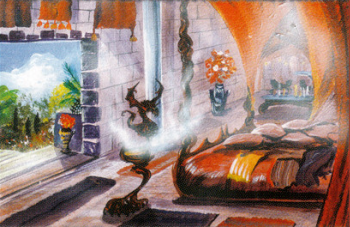 Daenerys and Viserys Targaryen stay at Illyrio's manse in Pentos for half a year while they await Daenerys's marriage to Khal Drogo. Before she is presented to Drogo for the first time, Daenerys is bathed by Illyrio's servants.[1]

Xaro Xhoan Daxos offers Daenerys the hospitality of his home while she is in Qarth. She thinks that Xaro's palace, which appears larger than a market town, makes Illyrio's manse look like a swineherd's hovel.[4]

After crossing the narrow sea, Tyrion Lannister is hosted by Illyrio until he agrees to accompany Illyrio to meet some friends to the east. Tyrion takes some poisonous mushrooms from the courtyard.[2]

Tyrion Lannister had lived all his life in a world that was too big for him, but in the manse of Illyrio Mopatis the sense of disproportion assumed grotesque dimensions. I am a mouse in a mammoth's lair, he mused, though at least the mammoth keeps a good cellar.[2]

My manse is large enough for any man, and more comfortable than your draft Westerosi castles.[3]