Jhogo is a Dothraki horserider in the khalasar of Khal Drogo.

Young Jhogo is very thin with a faint shadow of a mustache[2] and a raspy voice.[3] He is fearless and quick to laugh.[2]

Jhogo is one of four Dothraki warriors assigned to the khas of Daenerys Targaryen within the khalasar of Khal Drogo. When Viserys Targaryen attacks his sister in the Dothraki sea, Jhogo uses his whip to separate them.[3]

Jhogo accompanies Daenerys during her visit to the Western Market in Vaes Dothrak. He helps stop an assassination attempt on Daenerys's life by a wineseller by ensnaring the man with his whip. He is given a tall, grey stallion by Drogo as a reward.[5]

When Daenerys intends to have Drogo healed using blood magic by Mirri Maz Duur, his bloodriders attempt to stop it. In the ensuing fight, Jhogo and Rakharo team up to kill Haggo.[2]

When Daenerys names Jhogo ko and asks him to become one of her bloodriders alongside Aggo and Rakharo, she offers him the silver-handled whip she received as a present during her wedding. He is at first reluctant, but is then the first of the three to accept after the dragons are born.[6] 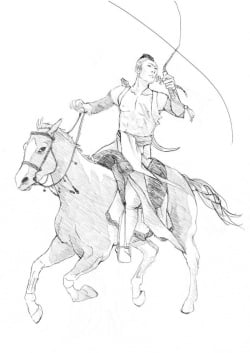 Jhogo serves in the Queensguard of Daenerys.[7] During their journey across the red waste, Jhogo advises Daenerys to either tie the dying Doreah to a horse saddle or leave her.[8]

While her khalasar rests in Vaes Tolorro after crossing the red waste, Daenerys orders her three bloodriders to scout out the country, each one in a different direction. Jhogo leaves to the south-east and follows the shierak qiya. He is the last to return, having found the city of Qarth, and is accompanied by three representatives of the city, Pyat Pree, Quaithe, and Xaro Xhoan Daxos.[8]

Jhogo leads the procession during Daenerys's visit to the Hall of a Thousand Thrones to petition the Pureborn, using his whip to set the crowd aside. He brushes Quaithe away from touching Daenerys when the shadowbinder warns Daenerys to leave the city.[9]

Jhogo later accompanies Daenerys to the House of the Undying, where he warns her that it is a evil place, a haunt of ghosts and maegi. He helps disarm Pyat Pree with his whip, after Pree tries to murder Daenerys.[10]

Afterwards, Jhogo, along with Aggo, rides with Daenerys to the port of Qarth to seek a ship, where he buys a handful of fat white cherries to eat. He rushes to Daenerys's aid during her second near assassination attempt and seizes Arstan Whitebeard with a knife to his throat before releasing him on Daenerys's order.[11]

Jhogo guards Daenerys when she visits the Plaza of Pride to discuss the purchase of Unsullied slaves. He leads the procession back to her ships and almost pulls his silver-handled whip to move back the Astapori crowd, but is stopped by Daenerys before he escalates the situation.[12] As one of Daenery's three bloodriders, Jhogo is often asked to keep her company as to prevent Ser Jorah Mormont from approaching her when alone.[12]

Jhogo protects the rear of the litter alongside Rakharo during the fall of Astapor. He kills several Good Masters and Astapori slavers on the day of the battle, taking down one slaver soldier with his silver-handled whip.[13]

On the march to Yunkai, Jhogo and his fellow bloodriders are also made kos by Daenerys and are put in charge of commanding the 30-odd mounted khalasar remaining to her, leaving their guarding duties to Arstan Whitebeard and Strong Belwas. Jhogo dismisses the threat of the Yunkish scouts and later participates in the battle near Yunkai, successfully leading the Dothraki mounted warriors in wedge formation against the enemy center.[14]

During the siege of Meereen, Jhogo almost comes to blows with Aggo and Rakharo over who will fight Oznak zo Pahl, the Hero of Meereen. Daenerys ultimately stops her bloodriders from fighting, deeming them brave but too young and valuable to lose. Belwas instead slays Oznak.[15]

Jhogo and the other bloodriders continue to serve their khaleesi.[16]

Jhogo, Aggo and Rakharo are commanded by Daenerys to use her khalasar to subdue the hinterlands of Meereen and end the slavery there.[17] Ser Barristan Selmy, Lord Commander of the Queensguard, reports the bloodriders successfully harried the slavers from the hills and struck the shackles off the slaves, and are planting and bringing crops to Meereen to market.[18]

Daenerys recalls Jhogo and her other bloodriders back to Meereen. They arrive in time to assist her in feeding the thousands of survivors from the siege of Astapor, where Jhogo tries to stop Daenerys from letting the sick refugees touch her. He and Rakharo are shamed into aiding the sufferers of the bloody flux by helping them bathe in nearby Slaver's Bay.[19]

When peace is signed between Yunkai and Meereen, Jhogo—long with Groleo, Daario Naharis, Hero and three kin to the new King of Meereen, Hizdahr zo Loraq—are given over to the Yunkish camp to vouch for the safety of the seven Yunkai commanders who are allowed to enter the city of Meereen.[20] When the decapitated head of Groleo is presented to Hizdahr, Reznak mo Reznak demands the remaining hostages to be returned, though only three of Hizdahr's kin are released.[21]

At the council called by Barristan, the elderly jaqqa rhan Rommo agrees Jhogo must be freed, as he is Daenerys's "blood of her blood" and the honor of the khalasar demands it. Jhogo remains a hostage of the Yunkish.[22]

Daenerys: Jhogo, to you I give the silver-handled whip that was my bride gift, and name you ko, and ask your oath, that you will live and die as blood of my blood, riding at my side to keep me safe from harm.
Jhogo: Khaleesi, this is not done. It would shame me, to be bloodrider to a woman."[6]

When cowards hide behind great walls, it is they who are defeated, Khaleesi.[15]