Jonos Bracken is the Lord of the Stone Hedge and head of House Bracken. In the television adaptation Game of Thrones, he is portrayed by Gerry O'Brien.

Jonos is heavier than Jaime Lannister, but not as tall. He has thick shoulders and arms, and coarse brown hair and brown eyes. Jonos wears a brown woolen tunic embroidered with the red stallion of House Bracken. When ready for combat, he wears plate and mail and a grey steel greathelm with a horsehair crest.[2]

Jonos has five daughters, and a bastard son, Harry Rivers. However, his rival, Lord Tytos Blackwood, does not believe that Harry was fathered by Jonos.[2] 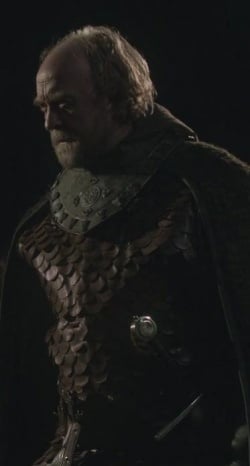 Gerry O'Brien as Jonos Bracken in Game of Thrones

Before arresting Tyrion Lannister at the crossroads inn, Lady Catelyn Stark has Bracken men-at-arms affirm that Jonos is loyal to her father, Hoster Tully, the Lord Paramount of the Trident.[4]

After the death of King Robert I Baratheon, the Iron Throne decrees that Jonos and other river lords swear fealty to the new king, his successor, Joffrey I Baratheon.[5] Lord Tywin Lannister sends Ser Gregor Clegane to attack Jonos's castle, and the Mountain rapes one of Lord Bracken's daughters[2] during the burning of Stone Hedge.[3]

After the siege of Riverrun is broken in the Battle of the Camps, Jonos returns from ruined Stone Hedge. At Robb Stark's war council in Riverrun, he sits as far away as possible from his rival, Tytos Blackwood, Lord of Raventree Hall. Jonos suggests allying with King Renly Baratheon against King Joffrey and the Lannisters, and surprisingly agrees with Tytos in denying Catelyn's suggestion of peace. Jonos joins the other river lords in declaring Robb to be King in the North[3] and King of the Trident.[6]

During the liberation of Stone Hedge, Lord Jonos is wounded and his nephew, Hendry, is slain.[7]

Jonos agrees with his rival, Lord Blackwood, that Ser Edmure Tully has devised a good plan to trap Lord Tywin Lannister in the riverlands.[8]

Jonos's natural son, Harry Rivers, is revealed to have been killed by the Lannisters.[9]

Jonos is cold toward Catelyn because she released Robb's captive, Ser Jaime Lannister.[10] Lord Bracken takes part in the launching of Lord Hoster Tully's funeral boat with six other nobles at Riverrun.[11]

Tywin expects that Jonos will yield after the Red Wedding.[12] A dozen of Jonos's own kin are killed at the event.[2] After Joffrey's death, the new king, Tommen I Baratheon, pardons Jonos for his part in the War of the Five Kings.[13] 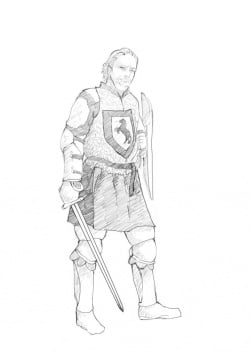 Lord Jonos besieges Raventree Hall on behalf of the Iron Throne. After Jaime resolves the siege of Riverrun, Lord Karyl Vance implores him to intervene at Raventree since Lord Tytos Blackwood will never surrender to Jonos.[14]

Ser Jaime Lannister arrives to end the siege of Raventree, finding Jonos abed with a common woman named Hildy. When Jaime inquires about Lady Bracken, Jones responds that she spends all her time praying after Stone Hedge was burned.[2]

Jonos hands Jaime a map with the lands he wants for subduing Lord Tytos Blackwood, along with compensation for the damage Ser Gregor Clegane and the Mountain's men did to his land and family. Jaime points out Jonos has not subdued Tytos and that letting him keep his head after initially declaring for House Stark seems recompense enough for the damage caused by Gregor, who is already dead. Jonos insists that he will keep faith with the crown as he did with the Starks.[2]

During his surrender to Jaime, Tytos agrees to surrender a smaller portion of Blackwood land than requested by Lord Bracken. Jonos is also unhappy that Jaime is taking one of Tytos's sons, Hoster, as a hostage instead of his only daughter, Bethany. Jaime upsets Jonos by ordering him to send one of his own daughters to attend Queen Regent Cersei Lannister at court in King's Landing.[2]

Gregor Clegane laid waste to my fields, slaughtered my smallfolk, and left Stone Hedge a smoking ruin. Am I now to bend the knee to the ones who sent him? What have we fought for, if we are to put all back as it was before?[3]

Aye, I kept faith with the Young Wolf. As I'll keep faith with you, so long as you treat me fair. I bent the knee because I saw no sense in dying for the dead nor shedding Bracken blood in a lost cause.[2]

The red stallion was ever a welcome sight in Riverrun ... My father counts Jonos Bracken among his oldest and most loyal bannermen.[4]

When did Blackwood and Bracken agree about anything that was not certain, I ask you?[8]

Tytos: For all his rutting, he has not proved man enough to father sons.


Jaime: He had a bastard son killed in the war.


Tytos: Did he? Harry was a bastard, true enough, but whether Jonos sired him is a thornier question. A fair-haired boy, he was, and comely. Jonos is neither.[2]
—Jaime Lannister and Tytos Blackwood